How can I quickly and safely discharge a charged capacitor (small and low voltage; <= 42V)?

I am learning how to use capacitors (ceramic and electrolytic from 1pf - 1000uf) and am trying out various experiments using a breadboard. I am constantly adding/removing things to my layout to see what happens... but waiting for a capacitor to discharge sometimes takes a long time! The book I am currently reading (Make: Electronics) suggested to "discharge a capacitor by touching a resistor across it for a second or two". Is this safe/recommended way? Can I just hold the resistor with my fingers and touch it across both terminals?

Note: I have to admit I am a bit paranoid with capacitors after seeing pictures of exploded capacitors and resulting fallout such as melted breadboards, burnt tables and even reading about people losing fingers!

Edit: I am currently working with 1.5 - 12V though I also have some 24V stepper motors which I'd eventually like to get working.

With small capacitors up to 1 mF, there is little to worry about. I suppose it's a good idea to make sure they are discharged before plugging them in where the voltage that could be on the cap could damage something, but this is something not generally worried about until you get to some real energies or high voltages.

For small electrolytic caps like what you are working with, just short them against something metal, like a bare component lead, metal chassis, or handy screw driver.

Don't waste brain cycles thinking about this for anything small enough to be a ceramic cap you can plug into a breadboard. By the time you plug it in, your fingers will have discharged it. Even if not, do the math. 1 µF at 10 V is only 50 µJ. Yes microJoules. Big deal.

Instead of holding the resistor with your fingers try gluing it to the end of a Popsicle stick or some other insulated material. That way your fingers will be much less likely to come in contact with the capacitor. If what you are dealing with is 20 volts or less this should be fine.

I am assuming we are talking about relatively small capacitors and voltages here. If you start talking about high voltages that could be fatal then what you want a professionally manufactured device and extra precautions.

Here is an article where someone made a nice discharge probe from a Bic pen. He also goes into the math if you are curious. Once again - safety first! If you are dealing with lethal voltages your best alternative is to use a professionally manufactured, tested and certified probe.

Now having said all that, I agree with Olin that this will be overkill for the small capacitors you are currently dealing with. This information may prove helpful as you advance and perhaps start dealing with bigger capacitors and higher voltages.

The product of the resistance (in Ohms) and capacitance (in Farads) is the scale time for the discharge (to go to 1/e of the original charge): t = RC. With V = Q/C and I = V/R = Q/t, you can also solve for the minimum resistance to keep the discharge current to a safe value. (Keeping the current below 1 mA is a rough guideline: https://www.asc.ohio-state.edu/physics/p616/safety/fatal_current.html That's for discharge through humans, but what constitutes "safe" varies by what's connected to your discharge circuit. If you're running the current through flexible copper wiring, it can probably take a few amps.) Also note the energy stored in the capacitor, which will be deposited in the resistor which shorts it: U = 0.5 C V^2.

As long as you're dealing with the sorts of capacitors typically used with bread boards, you can probably short it with copper wire, as others have mentioned: 1 uF * 1mOhm = 1 ns discharge time. If it only has 42V on it, these formulas say it will have a high current for a few nanoseconds, but the nanoHenry-scale parasitic inductances will limit the current and slow the discharge. That 42 V at a 1uF is less than 1 mJ, which could damage sensitive electronic components - so don't short out the capacitor with that high-end CPU. Anything else should be fine.

If you get into voltages and currents where discharge takes a second or more, or where your discharge currents will be in excess of that 1 mA for more than 1 ms, or where the energy stored exceeds a few Joules, then you should be careful: Check the current and power ratings of the components in the discharge circuit, estimate the inductance, and maybe run a simple sim of the discharge process. In general, discharge-before-use won't be a significant issue unless your capacitor is comparable to a full Farad or the voltages are a few kV.

Not sure how relevant this post is, but here is something I've been developing for a relay timer circuit.

Q1 is a PNP transistor that will turn off when the voltage is released, discharging the capacitor to ground. 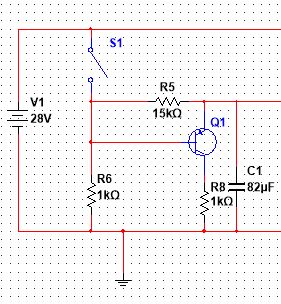 Not the answer you're looking for? Browse other questions tagged capacitor discharge or ask your own question.

17
Do capacitors automatically release their energy over time?
9
How to safely discharge high voltage (> 42 V) capacitors?
5
Health considerations when disassembling consumer electronics
0
How to safely charge a 200v 330uf capacitor?