If you want a linearly-spaced set of resistances, you can use a ladder of logarithmically-spaced resistors and short out different combinations, as described here.

Is there a way to get a logarithmically-spaced set of resistances?

If you have 2 SPST switches, there are 4 different states they can be in (off-off, on-off, off-on, on-on).

Is there a way to connect these switches with (any arrangement of) resistors, such that the total resistance between two nodes of the 4 states is {1, 10, 100, 1000}? In other words, a digitally-controlled logarithmic rheostat. The states don't have to be in any particular order.

If this is possible, can it be extended to larger numbers of switches (8 values from 3 switches, 16 from 4, etc.)?

I enjoy little combinatorial puzzles, and 'what if' questions, and trying to wring the maximum usefulness out of constrained situations. So while I expect my 'solutions' are not exactly what you're looking for, they may provoke some thought, and possibly further experiment.

If series switches as in a conventional 1, 2, 4, 8 resistor box don't work, how about a parallel arrangement? Like these configurations? 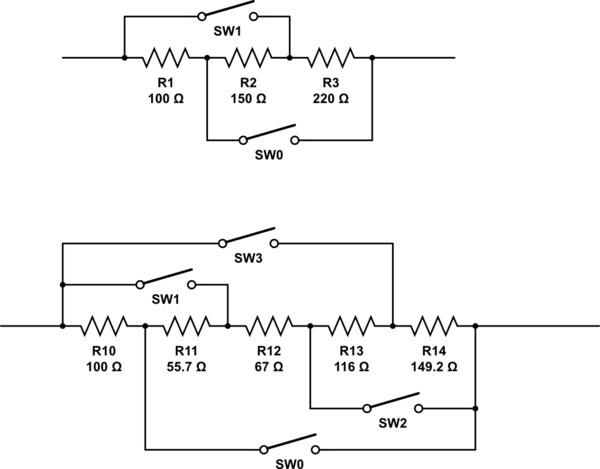 It's a bit of a drag to compute manually, or even build a spreadsheet to compute the total resistance for all switch combinations, so I wrote a python program to crunch the numbers, and used the scipy optimizer to find good values, as although the 3 resistor solution looks systematic, it's not obvious how that extends to more resistors. If you want a copy to play with just ask.

Adding more switches gets finer steps, but we get fewer than 2^n steps from n switches, and we get even fewer ones that are nicely spaced.

The second figure gave 14 unique resistance settings, covering a range of 28.4:1, with the 10 most evenly spaced geometrically being ...

This is a plot on a log axis of the resistances 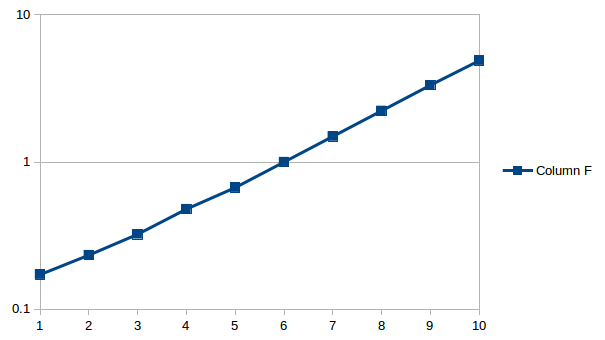 Unfortunately, things don't improve much when we add even more switches. I tried 8 switches, 9 resistors. I tried random values, optimized values, tight spreads, wide spreads. However there was always a big step, often several, in the middle of the range. Had the big step been at the end, that would have been more tolerable. But a big step in the middle cripples general purpose usability, you can't guarantee that you'll be able to find the step you want.

Here is one example of a random run. This allowing a random choice for each resistor in the range 100 to 500ohms. 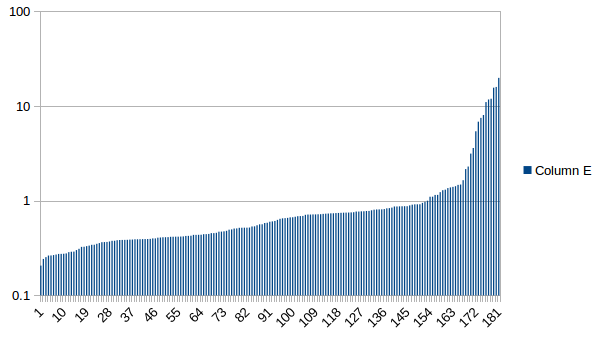 Over two decades of variation, and mostly fine steps. But you can see those bigger steps, the largest is ratio 1.35, very little better than the 5 resistor case. So while extra switches improved the range a lot, the fineness in the lower resistances a lot, the lack of improvement in big steps in the upper resistances means I don't feel the extension to more switches has the bang for buck. While optimisation can move the big steps around, it doesn't really reduce them that much.

A sort of related topic. I wanted to do some low current experiments, and to simplify that, house some large value and wide-range resistors. I like to minimise the number used, and maximise the number of connection possibilities. The following arrangement occured to me using E3 series resistors.

Each junction goes to a 4mm socket. Connecting to each resistor in turn obviously gives me the E3 series.

Connecting to four resistors in series, for instance R4+R5+R6+R7 = 17.9M (instead of 18M). The other quads give approximately half of the remaining interpolating resistors in the E12 range.

Connecting to three resistors in series, with the middle one shorted with a link, for instance R4+R6 = 5.7M (instead of 5.6M). The other 'spaced pairs' give approximately the other remaining interpolating resistors in the E12 range.

To get a series of actual decades, unfortunately, you need as many switches as you want useful decades above 1, in a set-up like this:

Which does allow you to also make other weird values, but no easy "multiples", as the system of excitation does not numerically match the system of output and thus inherently requires non-linear elements if you want to make sure 2 binary inputs make (only) the 4 desired outputs.

Not the answer you're looking for? Browse other questions tagged resistors passive-networks math resistor-ladder or ask your own question.

3
Electronically switched decade resistance box design
1
Are three SPST switches required to convert two resistors from being in series to being parallel
0
How to build a digital potentiometer with standard value resitors and MOSFETs?
0
Building a numeric potentiometer for AC current

0
Wheatstone circuit not functioning
4
how to detect variations of small resistances
6
How should I use rotary switches and resistor networks to uniquely relate each possible combination of switch settings to an analog voltage?
0
class AB amplifier input resistances
19
Side effects of using large resistances
0
Using resistor networks as voltage ladder
0
Circuit resistances with activating switches
0
Thévenin's theorem exercise, resistances
1
Direction of current flow in resistor networks
0
How to build a digital potentiometer with standard value resitors and MOSFETs?