How to light a bulb from an audio signal?

So this is my first post, hello everyone. :D

Well, I am trying to make my computer/synthesizer light up a bulb - Reacting to the voltage. Right now this is working with an LED: (I using a 2n3904 and some random LED) 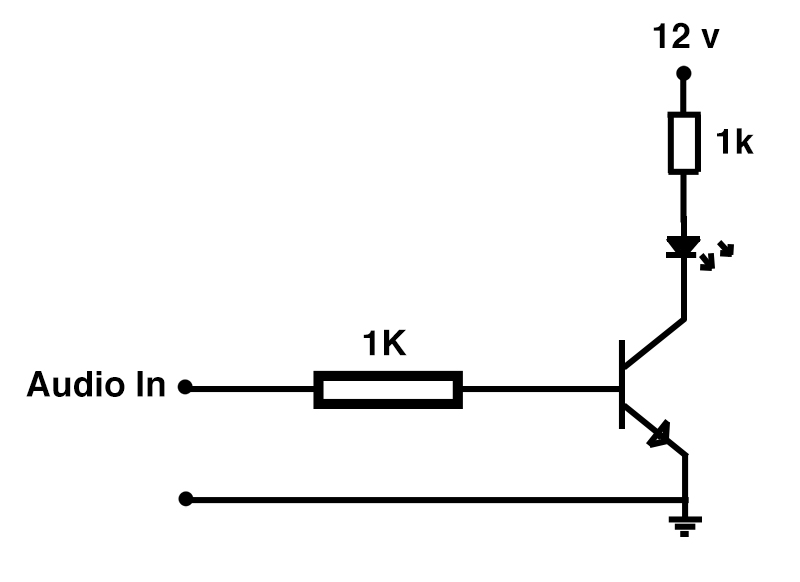 But when I am using an incandescent light bulb (12v, 30mA) it does not work. I have removed the 1k resistor from the supply, and tried different lower value resistors for the transistor base. I even added another transistor to make more gain, but with no luck.

Maybe I need more energy to light it up? A capacitor? More gain? Or am I totally forgetting obvious (Diode vs. bulb)?

The basic problem is that the light bulb requires a lot more current to light up than the LED does. You said yourself that the bulb requires 30 mA. From the 12 V and 1 kΩ resistor in series with the LED, it's clear that the LED is drawing less than 10 mA. You can probably see a visible indication with just 1 mA or so. That's a lot less than a incandescent bulb requires to light visibly. There is at least a order of magnitude difference between lighting the LED and lighting the "bulb".

To get higher output current with the same input signal, you need more current gain. One easy way to do this is to use a second transistor:

Q1 works as your transistor does now. But instead of turning on the LED or bulb directly, it turns on Q2. With Q1 fully on, Q2 gets about 1 mA of base current. It needs a minimum gain of 30 to support 30 mA of output current. Many small signal transistors can do this, including the one shown.

This circuit will works to drive the LED, although you can now use a lower resistor in series with the LED to get higher current and therefore higher brightness. Let's say you've got a common green LED that drops 2.1 V and can take 20 mA. Just about any cheap green LED you can find can do this. A 510 Ω resistor in series with the LED will limit to the current to just under the 20 mA the LED can handle. This will produce more light than the "light bulb" at 30 mA, assuming you mean a incandescent bulb.

Current will only start to flow to the base of the bipolar junction transistor once the base - emitter voltage gets above + 0.7 V or so. Thus only signals above 1.4 V peak to peak will get amplified and switch on the LED. While LEDs will light up practically instantly, an incandescent bulb takes time to warm up before emitting light, so the transistor has to conduct for a much greater portion of time before light is produced.

Another problem with your circuit is that there is no path for charge which has flowed to the base of the transistor to replenish, as the transistor won't allow reverse current flow through the base at low voltages. The audio input is most likely capacitively coupled at the source, so this DC bias current can't come from the audio source either. The end result is that the circuit will build up a negative DC voltage at the audio line, which makes it progressively harder for positive peaks in the audio signal to overcome the combination of the base-emitter voltage drop and the generated input DC offset voltage. Eventually just leakage currents trough the capacitor and transistor will be replenishing the charge at the base, which is apparently just enough to illuminate a LED.

The simplest way to fix this would be to add a 1uF or greater capacitor between the audio input and the base resistor, and a schottky diode between the ground (anode) and the base resistor - capacitor node (cathode). This way the capacitor will charge trough the diode during negative peaks in the audio, and discharge trough the transistor base during positive peaks. A normal diode will work too, but schottky diodes have a lower voltage drop (e.g. 0.2 V instead of 0.7 V), allowing for the circuit to be more sensitive.

If this isn't sensitive enough, search for "audio peak detector" on the web.

it does not work.

That has very little information to help others help you. A description of how it didn't work would have been a lot more helpful.

With that said, a few possibilities.

If I were you, I would drive the base high and. Then measure the voltage on the transistor.

Use an LED with an Diodes Incorporated AL8805

In the schematics below the CTRL is for a PWM signal.