I'm trying to find out if there is a clock fanout buffer with two-input multiplexing that allows each output to select the the input independently.

I found an IDT part that is a two-input multiplexing 12-output fanout but it appears you can only select one input at a time to fanout to all 12 outputs: 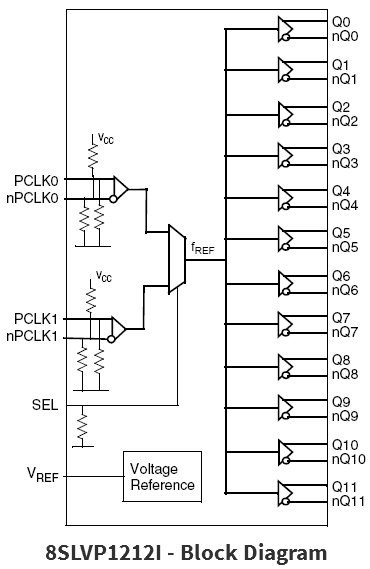 I.e. for that part, all outputs are outputting PCLK0 at the same, or PCLK1, not a mix of the two.

What I'm looking for is something like that only where each output Qn can be independently configured to buffer either input clock PCLKm. E.g. So you could have Q0, Q1, and Q3 outputting PCLK1, while Q2 and Q4 are outputting Q0, etc.

Here's a block diagram of what I want to do:

The PLL and receivers can't really change, and I need to be able to select each output to buffer one of the input frequencies independently (as shown) and change them at runtime (not shown, but imagine I want to change output 3 to 160MHz while this is running). I imagine this would require a control interface like I2C or similar, not just config pins like most 2-input fanout buffers have.

Does something like that exist, and if so what would it be called? Obviously this could be done with a PLL, but I'm hoping to reduce space/cost/ etc with a buffer solution.

Whatever solution you find, it will involve at least 12 2:1 multiplexers. These could be integrated in an IC or each an individual IC.

With a quick search, the closest match I found is the NB4L7210 2x10 crosspoint switch: 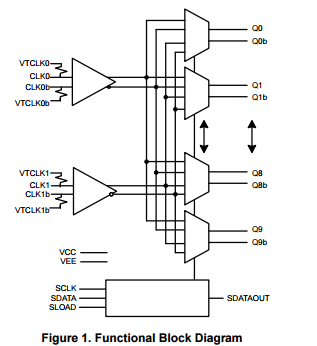 This only gets you 10 outputs. If you have a couple of pairs of outputs that you know will always connect to the same input, you could use a couple of 1:2 fan-out buffers to expand this to 12. Or you could use two of these 2x10 switches (having 8 unused outputs), or you could add a 2x2 crosspoint from a similar family to get the two additional outputs.

At your frequencies (< 200 MHz), for the connection from the PLL to multiple switches or multiplexers, PECL signals can be easily fanned out on your pcb using a multidrop configuration:

The R1 and R2 values are chosen to draw about 5 mA output current when the PECL driver is producing a low output (so the value will depend on your VCC voltage). The resistor values will be higher than 50 ohms. This is an "far-end termination" scheme. You're counting on the 50 ohm termination in the CML receiver to eliminate reflections.

You can add a second fanout buffer for PCLK1 and a two channel multiplexer to each output.

Not the answer you're looking for? Browse other questions tagged clock multiplexer buffer or ask your own question.

0
Three-state inverting octal buffer
11
When do I need to use a clock buffer IC?
4
Distributing a 40MHz clock to several PCBs
1
How to generate a continuous clock from one that periodically turns off?
1
Clock Issues from Buffer
0
Can an FPGA PLL lose lock if it is supplied with a stable input clock signal?
2
Need to level shift, buffer, and distribute a long distance, a 1.28 MHz signal
0
Runtime reconfigurable FPGA clock routing