Driving a 12V LED strip with an Arduino

I have 60 watt LED strip I want to control with an Arduino (the Genuino Mega 2560 actually). I found this tutorial which shows you how to do it for a white LED strip, but I am not sure whether I can just connect the same circuit three times or whether there is a better way. Also, the web store I wanted to buy components from said some parts, the BC639 in particular, are "outdated", suggesting the BC63916 instead. 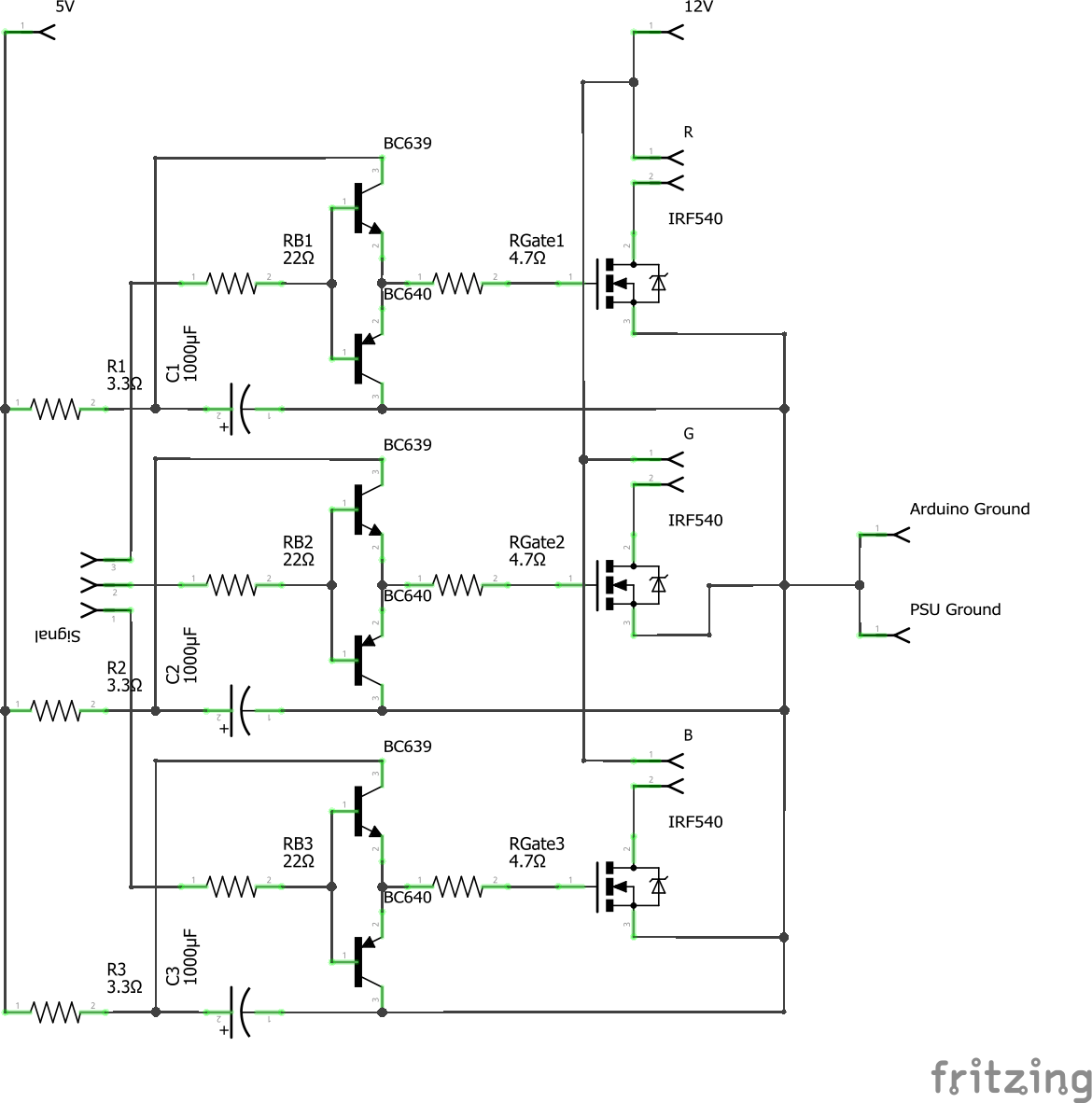 As you may notice I am quite inexperienced and I doubt that my "just slam everything together" approach above will work. My questions:

I have one last question, but it is not as important. I could buy a 12V power supply, but the power supply of my PC (which I intend to control the Arduino with) can also deliver this. Is this a good idea or will I destroy my PSU?

I recently made myself an LED driver very similar to the one in your linked tutorial.

Using a dedicated MOSFET driver is probably more economical, and arguably a more rational and/or professional solution, but the totem pole solution can be achieved with jellybean parts, and AFAIU there's nothing wrong with it per se.

As long as you tune the components reasonably, it will give you a plenty fast and powerful PWM driver.

I think 22 Ω for the base resistor seems a bit small. I used a ~300 Ω base resistor that should give a base current (and microcontroller output current) of about 15 mA, well within spec of the Atmel I was using, and enough to drive my 2n2222 and 2n2907 transistors, and by extension my IRLB3034 power MOSFET, reasonably hard.

I did not use a resistor between VCC and the totem pole.

4.7 Ω for the gate resistor seems OK to me, I used only slightly larger values, and got an acceptable amount of ringing at the gate.

Last but not least, do put a flyback diode across the output. I initially thought a flyback diode wouldn't be necessary with a "non-inductive" load like a LED strip, but my oscilloscope proved me wrong: It showed more than 40 V spikes at my MOSFET under load, enough to theoretically damage it. Bodging a Schottky diode onto it fixed the problem.

The specs for the PSU should tell you how much current you can draw from the 12 V rail. Generally, a modern PSU of decent quality should be able to handle 60 W just fine.

You are overcomplicating it. For LED PWM brightness at anything less than many 10's of KHz modulation frequency and for the voltages you are dealing with, you can simply drive an N-channel MOSFET gate directly or you could use a simple quad/hex non-inverting buffer logic chip if you were worried about your microcontroller.

A circuit for each channel of the LED (R, G, B channels) can be a simple as this: 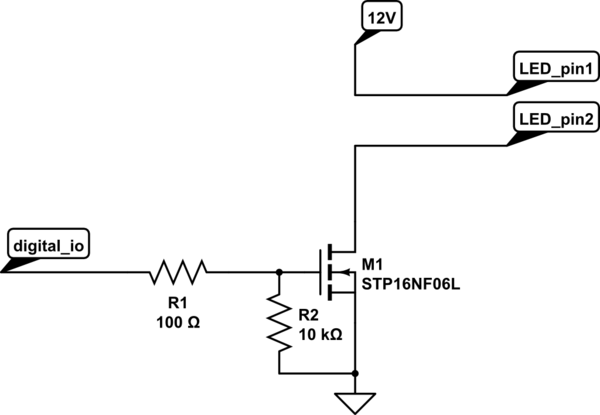 By the way, this assumes the LED R G B channels do not need any kind of current-limiting. If they don't have current limiting resistors or built-in current limiting features, you will need to either put a resistor in the path from 12V to ground somewhere for that channel, or you could implement a resistor + BJT current limiting loop on the N-channel MOSFET.

For low volumes and low board space an integrated CMOS gate driver can be used to drive the MOSFET. See UCC27517A for an example.

Oh and by the way, if you need less than 7 A you can use something like the LM5112 instead of the driver and the MOSFET. (If you like simpler is better.)

Not the answer you're looking for? Browse other questions tagged arduino led-strip totem-pole or ask your own question.