I'm building a board controlling external stepper motor drivers that have optoisolators (with integrated resistors, these are meant to be driven with 5V and consume 13mA then) on their inputs. As the external boards are connected via cables that may be accidentally disconnected or shorted, I'd like to verify that there is indeed a LED connected on the other side. The signals are generated from an FPGA, so I have a bit of flexibility in the implementation.

This integrates everything in a single package, but it seems all of these ICs need data to be shifted in serially (which reduces the number of I/Os required, but adds complexity in the FPGA design). These seem to detect faults only when the channel is active, which is probably good enough, but could be improved. I'm not sure how well these detect faults if a series resistor is present.

Fairly simple logic, detects faults while the LED is on. Downside is that it requires 48 IO pins on the FPGA and 32 comparators (but banks of comparators should exist) for an error condition that should essentially never happen.

A colleague suggested an open-collector system, where I would run the IO pins essentially in bidirectional mode, and drive either 0V or go high-Z, at which current would flow to the LED through a pull-up resistor, however I still haven't quite understood how I could detect a broken connection this way (shorts are easy: while not pulling down, I can set the IO to input mode and check that it is high). Broken connections are more likely than shorts in the wiring.

Are there simpler approaches how I could control 16 optoisolators and detect wiring faults on the way to them?

This is the best i could come up with. All the values are aproximate. The udn2987 is an 8 output driver chip with over current protection. Two of these will fill your needs. At the output R1 drops the voltage to 5v before the opto.

If there is a short on any channel the udn2987 will assert its fault pin. If the fault pin is asserted then there is a fault.

This way you can drive and sense 16 channels with 34 pins.

The only problem is the udn2987 requires a minimum of 7v. Better ICs may be available.

For a low side switch with a series drop R, you compromise If current somewhat but there is usually lots of margin depending on Opto used.

Hence a series R could measure Vol to the opto Cathode with common Anode to 5V.

But only you can decide how many input ports you want to allocate to sense each output port. It depends how you control the steppers using software state machine, external hardware state machine; half step, full step, or ustep.

But then a couple SOIC-24 IC's may not fit in your real estate.

2.You could design a more complex circuit as well with parallel inputs/outputs.

3.I suggest your put state detection in the remote MOSFET driver board to determine if the motor is ready for steps in any active rotor position and have a single ready status bit returning. This would determine if stepper coils currents indicate valid phase currents. This needs some XOR logic to ensure alternating open windings to indicate a valid active rotor state.

4.Also you need to use good crosstalk prevention in the cabling if using high impedance modes which means 16 UTP pairs per port with +5V or else use low impedance standard logic drivers to handle 13 mA with Vol<0.5V and no chance of external power before internal driver Vcc is on to prevent latchup. 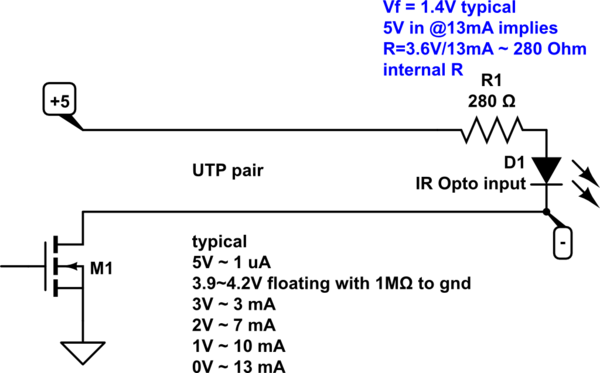 Not the answer you're looking for? Browse other questions tagged led opto-isolator or ask your own question.

5
'long' distance arduino daisy chain
0
Oops! N-channel Mosfet on sinking output
0
Using only a rheostat on a LED ceiling panel light
1
Converting appliance LEDs from constant current to constant voltage to allow for dimming
2
Explanation of the circuit in an LED bulb
0
Driving multiple loads with a single TRIAC and multiple optoisolators
0
Bypass LED with switch (why)?
6
Interfacing a button to a microcontroller (and PC) with a 50 m long cable
1
Current source with multiple “taps” for driving different LEDs