I have 8A 6port usb charger. It has two ports marked as fast charing, and the phone here actually charges faster than in the two other ports. When I dismantled it, all the USBs were on the same power line, so the charger is definitely somehow telling the phone how much current can it use. There are bunch of resistors around the ports, looks like connected to the data pins, but I will have to desolder the USB's to see how they are connected, as most of the paths are on the PCB covered by the ports. I would like to be able to make the third port also fast charge (don't worry, I know there are current limitations and the other ports are used for handsfree and smartwatch cahrging which takes ~500mA, and as the phones draws ~2A, it will still be in the power source's limits). I tried to find a schematics for the resistors connections, but only thing I was able to find is about how it's done for Apple and tons of articles about quickcharge with no tech specs.

Only thing I need is to tell Android phone it could draw more than 1A from the USB. I'm also going to build charging station from PSU (5V 30A) and here I would also want to tell the phones that they could draw more power. Thanks for any help.

The standard USB qualified method for telling a phone that it can fast charge is to short the D+ and D- lines together. (USB calls this out in its documentation)

The non standard way is to place voltages on the data lines. 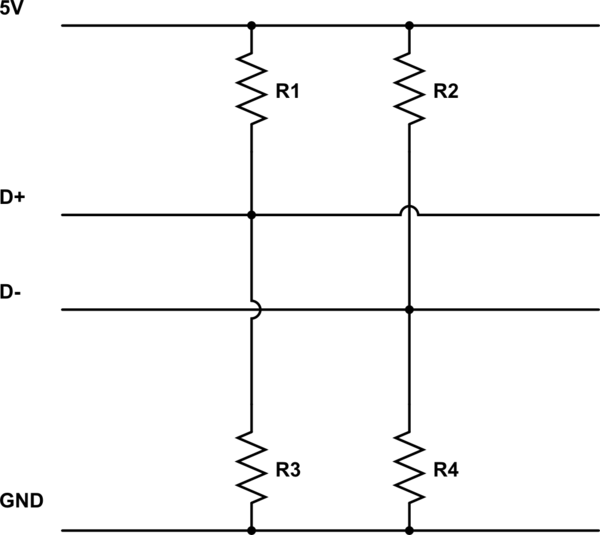 The usual way this is done is using two resistor dividers. What is unfortunate is that these voltages are all different depending on your device. If your chargers is capable of fast charging your phone then measure the voltages on the data pins and set up your own dividers to get those same voltages.

ePanorama had a great aggregation of the information on fast charging USB ports as it related to Apple devices. This APC article discusses the variation in D-/D+ voltages used by various manufacturers.

If your charger is indeed quick charge capable, go to Qualcomm and read up on QC. It. Is a lot more involved than being able to do the with a few resistors.

Not the answer you're looking for? Browse other questions tagged usb charging android or ask your own question.

50
What is the ideal way to handle data pins D+ and D- on a USB power adapter to be compatible with fast charging on devices?
3
Troubleshooting why Powerbank Doesn't Charge Cell Phone

10
Can an ATX PSU power a USB port directly?
1
how can I hack a usb charger to work with ALL phones and specifications
4
Waterproofing USB port
4
Is it generally safe to use any USB charger with any USB device? How does device know what current is charger able to provide?
0
Using D+ and D- from USB as power source?
3
Can Type-C device be configured as “Sourcing Device” without Power Delivery protocol?
1
Can I high current charge port transfer data at the same time?
0
Where do USB ports on laptops typically source their power when the laptop is charging?