I’m developing a motor controller based on a dsPIC33EP64MC504 from Microchip. The motor is a brushless permanent magnet synchronous motor of about 500W on 50V. The controller is based on an SVM algorithm from Microchip application notes. The bridge uses 6 MOSFETs SiR882ADP (100V) from Vishay. No speed nor current regulation is achieved meaning the motor is open loop controlled.

We‘ve first implemented a simple BLDC controller based on Hall effect sensors and it worked great. We’ve then decided to improve the control using a 1deg resolution encoder to achieve a sinusoidal control (for a later Vector Control and current control). Here we are facing some problems of exploding/burning/blowing MOSFETs at middle range power. I will not explain all the design choices and issues : we are working on it but I would like to investigate one soft/hard choice: the hardware current limitation strategy we've changed between the 2 designs.

The current limitation is an hardware dsPIC embedded function which overrides the PWM commands normally driven by the SVM based on an analog signal from current sensor.

Here are the main differences between the 2 approaches:

I understand that in the first strategy, the body diodes of the MOSFETs turn the driving bridge into a classical 6 diode rectifier: current is recharging our battery is that right? Anyway, this strategy seems really safe!

But what happen in the second case? Could the opening of only one half-bridge be the responsible for voltage overshoot and MOSFET destructions due to current loop behaving in a different way than in the first version? For example what happen in the case where the current limitation on PWM2 (the blue one) opens the corresponding half-bridge in the following condition ? 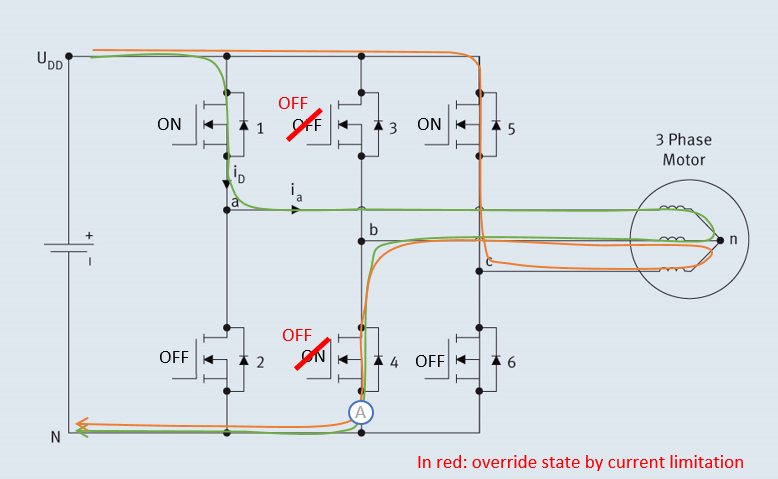 Thank you for your time and the answer you will give me (or not).

This may not apply here, but, I often see some kind of current limiting resistors along the Source to Drain paths on PWM cicuits, but, not on this. Yes, they are frequently low resistance values, but, seem to be needed in that application. They might be needed here, as well.

Not the answer you're looking for? Browse other questions tagged mosfet pic microchip brushless-dc-motor current-limiting or ask your own question.