What does it mean that a power supply is 'referenced to mains' and why is that dangerous?

I was watching a few different videos by BigClive on youtube. He was mentioning the danger of a particular light chain power supply because it was 'referenced to mains'. The voltage across the output terminals was 5v but an electrician's safety wand was still set off by being near the '5v' output.

Based on searching this site, it seems the neutral terminal of mains passed directly through to the power supply to be the neutral for the low voltage supply. Is this accurate? And how does this cause the detection wand to buzz?

Most power supplies use a double-insulated transformer between the incoming mains and the outgoing extra low AC or DC voltage. This means that you will not get an electric shock if you touch one of the output terminals.

Some very cheap power supplies do not provide that isolation. One or other of the output terminal may be at the full mains voltage. In some cases, it might be safe (well, safeish) with the plug one way round, but dangerous with the plug reversed.

Such power supply designs should never be used for "wall warts". They should only be totally enclosed within the body of an appliance, and even then only if there are no exposed electrical parts (such as headphone sockets) that the user could touch.

"Mains isolation" is the approach used to make most power supplies safer. So the real question is "Why do we use mains isolation?", which has been asked several times on this site with some very high quality answers already -- see here, here, and here.

There are some safety concerns when not using mains isolation, but there are many products that use non-isolated supplies and are still quite safe. The specific example in the video is dangerous because it's not isolated and the power supply output is exposed to the users through the power cord.

A power supply has a pair of connections for mains input (it may also have a connection for mains earth). While one of these connections is nominally neutral portable appliance standards generally assume that both of them are potentially dangerous. Reasons for this include the potential unreliability of flexible wiring and frequently plugged connectors and the fact that some countries use unpolaised sockets.

"refrenced to mains" means that there is a low impedance connection between the input connections and the output such that hazardous voltages/currents* on the input may be passed to the output. So the output terminals are a potential shock hazard. Such power supplies are cheaper to build as no transformer is needed.

It is possible to design equipment with transformerless power supplies safely but it means treating anything connected to the output of the power supply as-if it was connected to live mains.

I doubt that the cables and connectors on those lights would pass muster as mains connectors at least in Europe. The lights themselves it's hard to tell as it depends very much on how thick the plastic is.

User expectation is also an issue. Safety standards often talk about "reasonablly forseeable misuse". If something looks like a typical wall wart then people are going to assume it is a typical wall wart. Even if the equipment supplied with the non-isolated supply meets insulation and touchproofing standards for mains it would be all too easy for the wall wart to get repurposed to supply something else.

The 5V DC it outputs is relative. Between DC + and DC -, it certainly is safe. But between DC output and earth of your house, there is either full mains voltage or nothing depending on how the lamp is connected.

Many countries have non-polarized sockets so you can't be sure which terminal is live and which is neutral.

Here's an illustration of one of the cases: 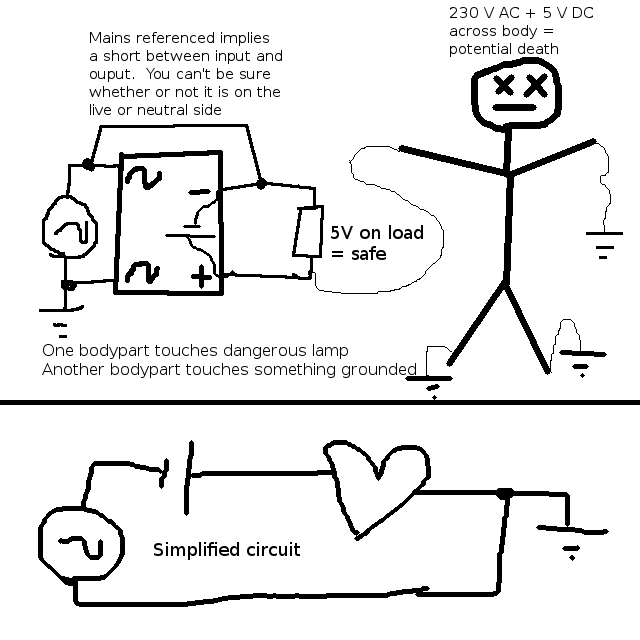 Not the answer you're looking for? Browse other questions tagged power-supply safety or ask your own question.

74
How is using a transformer for isolation safer than directly connecting to the power grid?
29
Why is it important for mains power supplies to be isolated?
15
Least expensive way to plug in a microcontroller into 120V (without wall wart or batteries)

1
Class II isolated power supply (wall wart) -- referencing the output to mains neutral?
2
Circuit works on battery but not on power supply. Any ideas why?
1
Powering LED strips with 5v power supply - safety question
1
What does 1 and 0 mean on this power supply?
2
Power a 12V 30A (instantaneous) load. Possible with 18650 cells?
0
If a power supply is not grounded, what situations could cause electrocution?
0
Is most of non-isolated power supply "safe"?