I would like to drive a 180W, 24VDC motor with a PWM signal using mosfets such as follows: 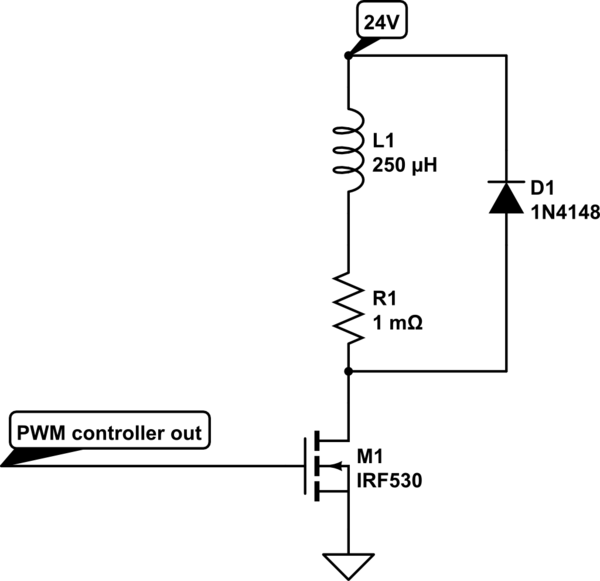 The motor is inside a control loop with negative feedback which regulates the speed of rotation by acting on the PWM output. Given a mechanical load, the speed of the motor can be regulated by varying the applied voltage. The variation in the voltage supplied to the motor is achieved by varying the duty cycle of the pwm output. So far all my efforts have been focused on designing the control system with the analogue PID controller.

Suppose the motor is rotating at a speed w which requires a 10V voltage and a current of around 2A. In this case I can see at least two problems with this approach:

As for the first problem, my solution would be use more mosfets in parallel in order to share the motor current. The number of parallel mosfets would be designed to handle the worst case scenario. However, I have never used mosfets in parallel and since I know that no two transistors are the same, I am afraid the current will not be shared equally (as in a resistor current divider) resulting in a possible overload of one/two mosfets. What are the critical points to consider while paralleling mosfets for this particular application? Furthermore, in case the "current sharing dilemma" is solved, should I put a resistor in series to each gate when sending the PWM signal to each mosfet?

As far as the diode is concerned, I would look for a diode that can withstand more current within the worst case scenario current for the motor which should be around 10 A. Is there a better way to do this?

If you think there is a better way to achieve the same goal, please do provide your solution. This is a hobby project and I need some constructive feedback/critics.

PS: when I talk about worst case scenario current I mean the nominal current under (a heavy) load. In case of high currents due to blocked rotor or short circuit, I plan to add a fuse for protection.

Yes, you can parallel MOSFETs, they are good at current sharing due to the positive temperature coefficient of their on-resistance, but...

You've made an error in the power dissipation estimate.

In PWM operation, the MOSFET is either fully on or fully off. The motor acts as a low-pass filter, and "sees" the average applied voltage, the supply voltage times the PWM duty cycle. So at 24V supply and 40% duty cycle, the motor would behave as if 9.6V dc were applied. I should mention that the PWM frequency should be high enough to keep the current ripple to a reasonable level.

When the MOSFET is on, the voltage across it is due to its on-resistance, 0.16 ohm at 25 deg C according to the data sheet. This is called conduction loss, and it varies with the current and the duty cycle. For example, at 2A 40% duty cycle the power would be 2A squared times 0.16 ohms times 40%, around 250mW. (This could more than double at higher temperatures; in any case, the power will be far less than 28W.) During this time, diode current is zero. If conduction losses are too high, you could select a MOSFET with lower on-resistance.

You will definitely need a diode with a higher current rating than the 1N4148. At 24V, I'd suggest a Schottky type for lower forward voltage drop.

Your motor draws 7.5 amps. Therefore, a suitable FET (say, RdsON 10mOhms) will dissipate RI^2=0.5W when running the motor at full power, and less when throttling down.

Of course, the motor will draw a much larger current at startup, so you will need a MOSFET able to dissipate more than this. Any TO220 MOSFET will do, provided it has low enough RdsON.

Obviously, the IRF530 shown here, with its 0.16 ohms RdsON, is not suitable. Pick a FET with RdsON below 10 mOhms, these days you'll have tons of options.

This application does not need paralleled FETs or current sharing.

As for the diode choice, it should dissipate a few watts, so a TO220 diode will work fine.

If you want to protect against a stuck motor... since you don't seem to use a microcontroller (??????) then you could measure the current using a shunt resistor and an opamp, or a hall effect sensor, then filter it, and use a comparator to stop the PWM if the current is too high for too long.

Not the answer you're looking for? Browse other questions tagged mosfet switches parallel nmos or ask your own question.

1
Optimal method for multiple MOSFETs for LED driving with a shared power rail
1
driving motor DC 24V with MOSFET
17
How many MOSFETs can we safely parallel in condition of very high currents? I had problems with a motor application at 48V 1600A
2
Can half-bridge current limitation in BLDC Motor controller cause MOSFET destruction?
12
High Voltage PWM Motor Controller - Mosfets Explode
3
Parallel MOSFETs to get more current (40A adjustable current source)
1
Driving a motor backwards and forwards using mosfet and Arduino pin safety
4
MOSFETs on Motor Controller died
17
Is paralleling MOSFETs a good or a bad idea?