How does this circuit compensate for current hogging?

In The Art of Electronics by Horowitz & Hill, there’s a section about current mirrors with multiple outputs. We're then given the following circuits: 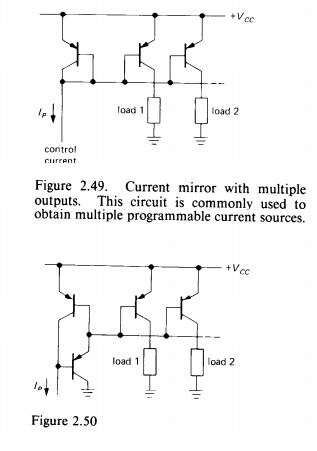 It's then described how the circuit shown in Figure 2.49 doesn't compensate for current hogging, since if load 1 was removed, the corresponding transistor will saturate and pull more current than the other transistors connected to the common reference base.

What confuses me is this: if you remove load 1 from Figure 2.50, the corresponding transistor will still be saturated there, just as in Figure 2.49. With that said, how does the extra transistor resolve this?

The fact that the current defining transistor's Collector is moved out of saturation is irrelevant.
Think of the added transistor as an Emitter follower increasing the current capability of the reference rail at the given Vbe voltage (It's now a voltage reference rail).
You might find this excellent reference a valuable read.

Not the answer you're looking for? Browse other questions tagged circuit-analysis current-mirror or ask your own question.

0
Question about the current flow and voltages in a simple NAND diagram
2
How does a synchronous motor know to increase current when the mechanical load is increased?
2
How does this current source circuit work?
1
How does the voltage difference develop when MOSFET is biased with Current Source?
0
How does current split in this circuit?
2
In a Wilson mirror, does Q3 need to have the same beta to cancel the base current error?
1
Is this current source (or mirror)? How does it work?
0
Proving the formula for parallel resistors
10
For this Art of Electronics circuit, why aren't the transistors specified? And what transistors do I use?
2
How do we derive the values for these Thévenin equivalent circuits?