Is my system going to last the same time if I put my batteries in parallel or in series?

But in which case is it going to last longer?

Thank you in advance !

You actually answered your own question in there..... When you have them in parallel, you get 4000mAh, and in series you only get the 2000mAh.

So with that you can see quite clearly that you get more mAh when they are in parallel.

If you wanted to know which one will last longer then you have all the required information right there in your question.....

Just take the mAh you have and divide it by what is required. Whichever comes out with the highest number is the one that will last longer.

So there isn't actually that much of a difference in this case.

Pretty sure this is the answer you were after unless I have missed something from the question?

A good place to calculate battery life is HERE

You description of the battery is confusing.

A CR123A is a primary (non-rechargable) lithium magnesium dioxide which has a nominal voltage of 3.0V.

A voltage of 3.7 would be a Lithium Manganese Oxide commonly used in power tools.

Another 3.6V is the Lithium Nickel Cobalt Aluminum Oxide used in medical devices which is similar to the Lithium Cobalt Oxide with higher capacity.

So I do not know what you have.

The next two images show the stable internal resistance. 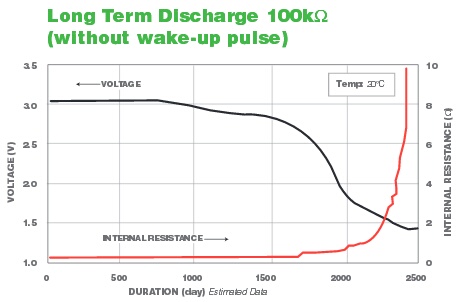 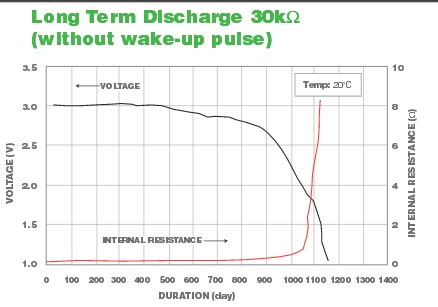 You asked: The system has to be shutdown when the voltage reaches 3V to prevent battery damage, fire etc. Is that true?

This is the lithium magnesium dioxide 2000mA hrs in an AA package. Probably similar to what you are using as it has a 0.3 mA curve.

Looking at the the above images, the internal resistance begins changing as it nears its end of life.

Below the battery is basically dead at 3.0V. 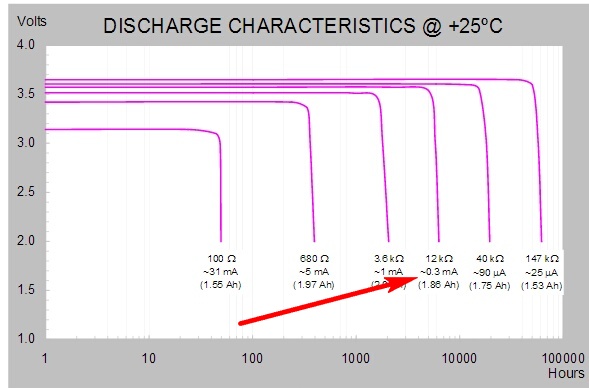 As far as parallel or serial. Serial will NOT increase capacity.

Given that most Lithium battery packs use parallel batteries, the consensus in the industry is it's okay to connect batteries of the same chemistry in parallel, and the internal resistance is very stable, parallel would be the way to go. There is the risk of a short (1 in 200,000) which can present a safety issue. Most shorts do no start fires or explode. Severe shorts may.

As far as safety, that is not my area of expertise. I would recommend to read what Isidor Buchmann has to say at Battery University, Why are Protection Circuits Needed? .

I do not know how many you are buying if this is a one shot deal or you are going into production and resale. Either way you want quality. Quality comes from a vendor like Panasonic or another well known name brand. They have reputations and a lot on the line.

I but buy a lot on Amazon and I have criteria for picking a vendor on Amazon. First want vendor to have hundreds of reviews. I then look at the ratio between 5 star and 1 star rankings. I want to see greater than 70% 5 star and less than 7% 1 star. These Leisure Chow batteries 38% 5 star and 30% 1 star. I would never buy a product with even 10% 1 star. I expect to see infant mortality in products so a certain percentage will die early and generate 1 star reviews and many people are so stupid they do not know how to use the product. But that accounts for less than 10%.

I do not know what kind of battery Leisure Chow is selling. At 3.7V it should be a Lithium Manganese Oxide which have high energy and lower capacity. Used in power tools. There are no 2000mAh Li-manganese batteries due to it low specific energy. You do not want Li-manganese.

If you have to have a rechargeable you need a Lithium Nickel Cobalt Aluminum Oxide.

What I think you need is a Panasonic CR-V3
3.0V, 3000 mAh, Manganese Dioxide. Two cells in parallel. When you buy a battery pack the manufacturer has matched the two batteries.
Or any of the 3V on this page:
Panasonic CR Series Primary Cylindrical Manganese Dioxide Lithium Batteries
Datasheet: Panasonic CR-Series Datasheet

Here's the problem: A battery is a voltage source. As such it will attempt to deliver its generated voltage at whatever load is connected to it. When two voltage sources are connected in parallel, each will try to deliver its voltage to the other battery. If the batteries both have the same exact voltage, the net current flow between the batteries is zero. If the voltages are not exactly equal, a current will flow from the higher voltage battery into the lower voltage battery. The magnitude of this voltage follows Ohm's Law. The resistance/load in the simple connection of two batteries with no external load is the interconnecting conductor (e.g. metallic battery holder) and the internal impedance of the batteries. Since both of these impedances are quite low (generally fractions of an Ohm for the holder and a few ohms for the batteries, the resulting "cross current" can be quite large compared to the magnitude of current the batteries are designed to deliver to a legitimate load.

Typically, the end result is a relatively rapid discharge of both batteries with a variety of side effect depending on the type of battery chemistry. Heat generation is one common side effect. In certain situations the heat can be great enough to thermally destroy the batteries.

The only salvation is that the two batteries might be perfectly matched both in initial voltage (e.g. as manufactured) and remain matched as they discharge over time. Or, the battery chemistry is such that it can accommodate the voltage difference and both batteries will work in unison to develop a shared operating voltage. Lead acid batteries can do this. Common alkaline batteries are not so accommodating. I'm not sure about your CR123 units. However, their current rating is high enough that I would perform an experimental parallel hook-up without a load, and in a safe, contained situation where I could terminate the connection if things get dangerously out of control.

Not the answer you're looking for? Browse other questions tagged batteries battery-charging battery-operated cell-battery low-battery or ask your own question.

0
Making a simple solar-powered lighting system, a few concerns
12
Is draining a Li-Ion to 2.5v harmful to the battery?
0
Minimum battery capacity
3
Method for rechargeable batteries in Parallel
0
What is a “safe” amount of amps to draw from this pack
0
Battery life estimation
0
How to connect four 18650 batteries to double voltage and capacity