I have a four element uniform linear array receiver and I want to know what will be the angular resolution if I perform perform Fast Fourier Transform (FFT) over antenna elements. As I think that it will be same as the beam width of the array. 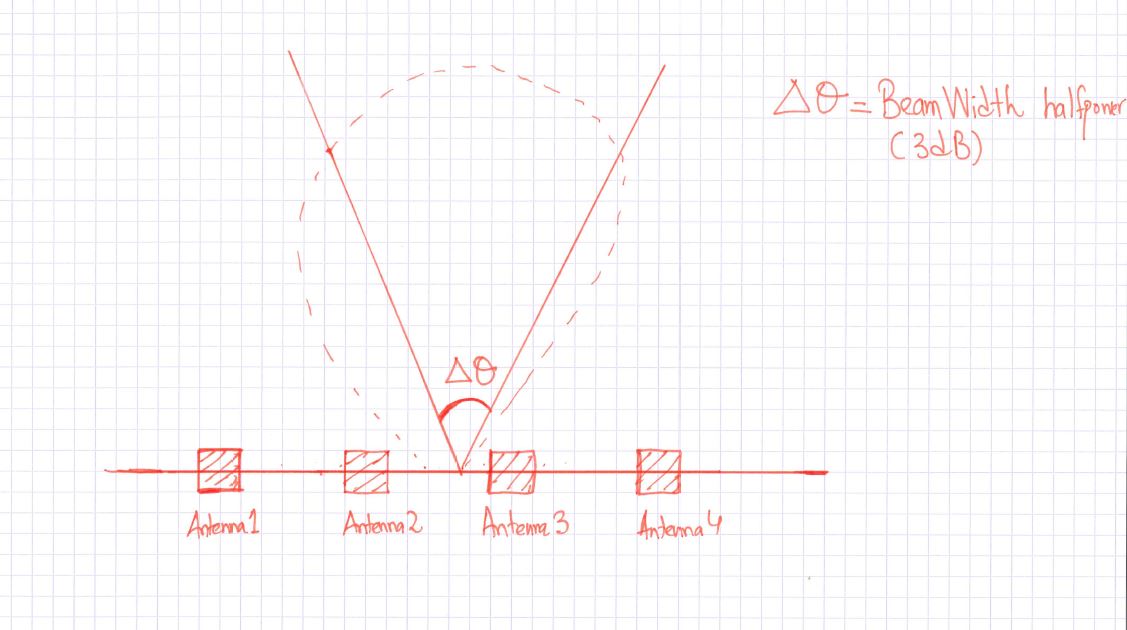 The antenna element spacing is lambda/2

Question1: What is the beamwidth of the array structure

Question2: If I perform FFT over the element array will I get the same angular resolution as beamwidth

Question3: How each bin in antenna FFT will represent my region of space (e.g Frequency bin 1 = theta 0 to 30 degrees)

where N is the number of antenna elements

d is the spacing between antenna elements

In order to find the beamwidth (3 dB), the above equation should be equated to

The solution will come to be as

the equation simplifies and can be approximated as

Thus beam width of planar antenna can be represented as

The frequency resolution using FFT can be represented as

where N is the number of samples but in our case it is equal to number of antenna elements.

and if we put

we get the same resolution as the beamwidth i.e

Note The answer will be in radians

*Also the beam width is approximated to 2/N i.e. N should be large enough to get the equality

Reference: Fundamentals of Radar Signal Processing by Mark A. Richards, 2005

Not the answer you're looking for? Browse other questions tagged antenna signal-processing dsp fft radar or ask your own question.

9
How to select frequency resolution and window size in FFT?
0
Phased Antenna Array Directivity
2
Phased array radar basics
0
Intuition behind ambiguity of direction using linear array
2
Calculate receiver dynamic range (understanding the effect of FFT processing gain)
1
Combination of different antennas
0
How do I compute the angular resolution of a radar system?
0
Why does an isotropic antenna becomes anisotropic inside a phased array (mutual coupling neglected)?