MOSFET reduces LED switching time - why and how to resolve

I am trying to drive an LED to rapidly (~10 ns) turn on, remain constant and turn off.

I have tested the LED with a pulse generator (1 ns switching and 5 V, 50 ohm output). A high speed detector is used to monitor the LED output. The resultant signal is shown in Figure 1. The layout is the top diagram in Figure 2. 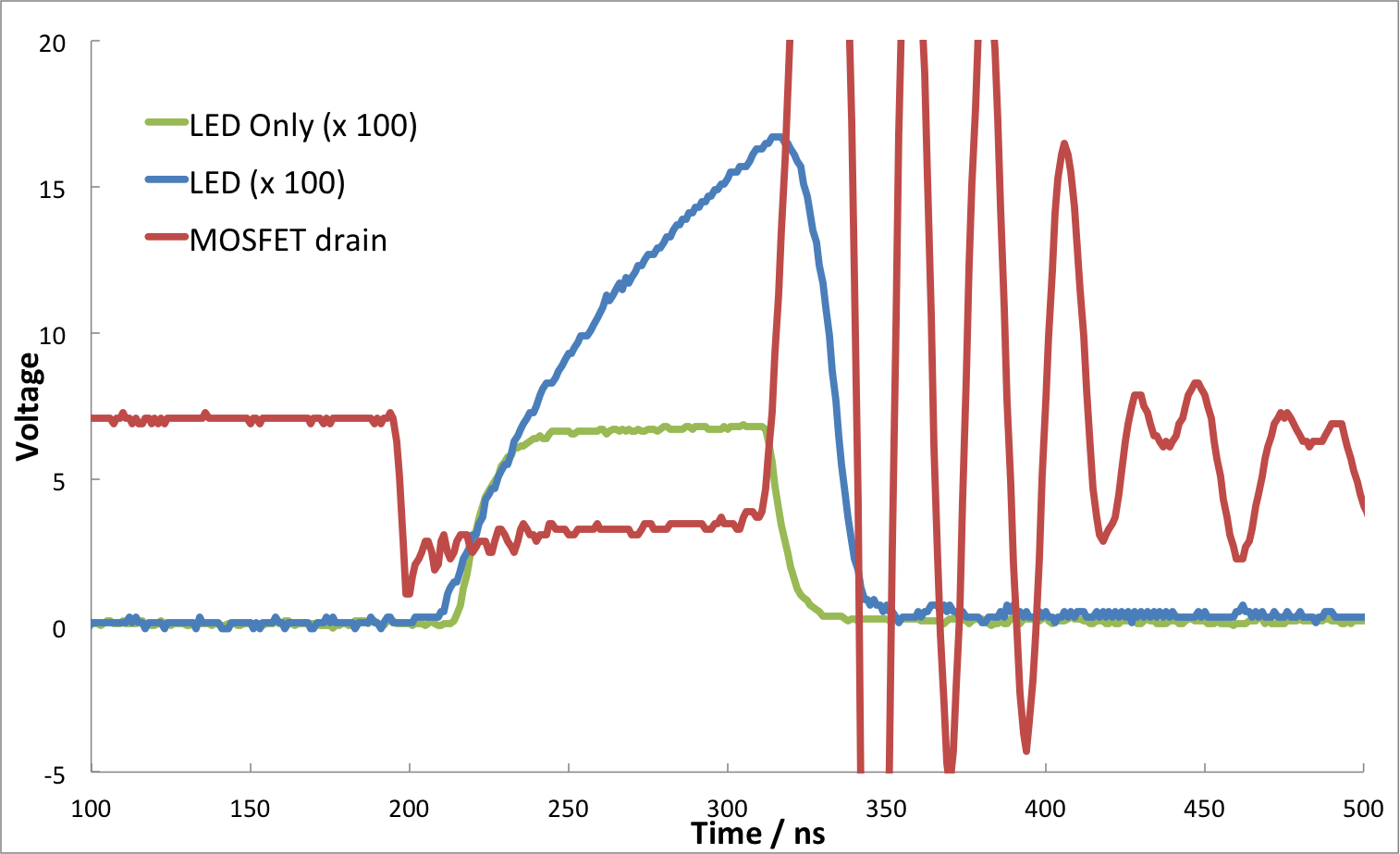 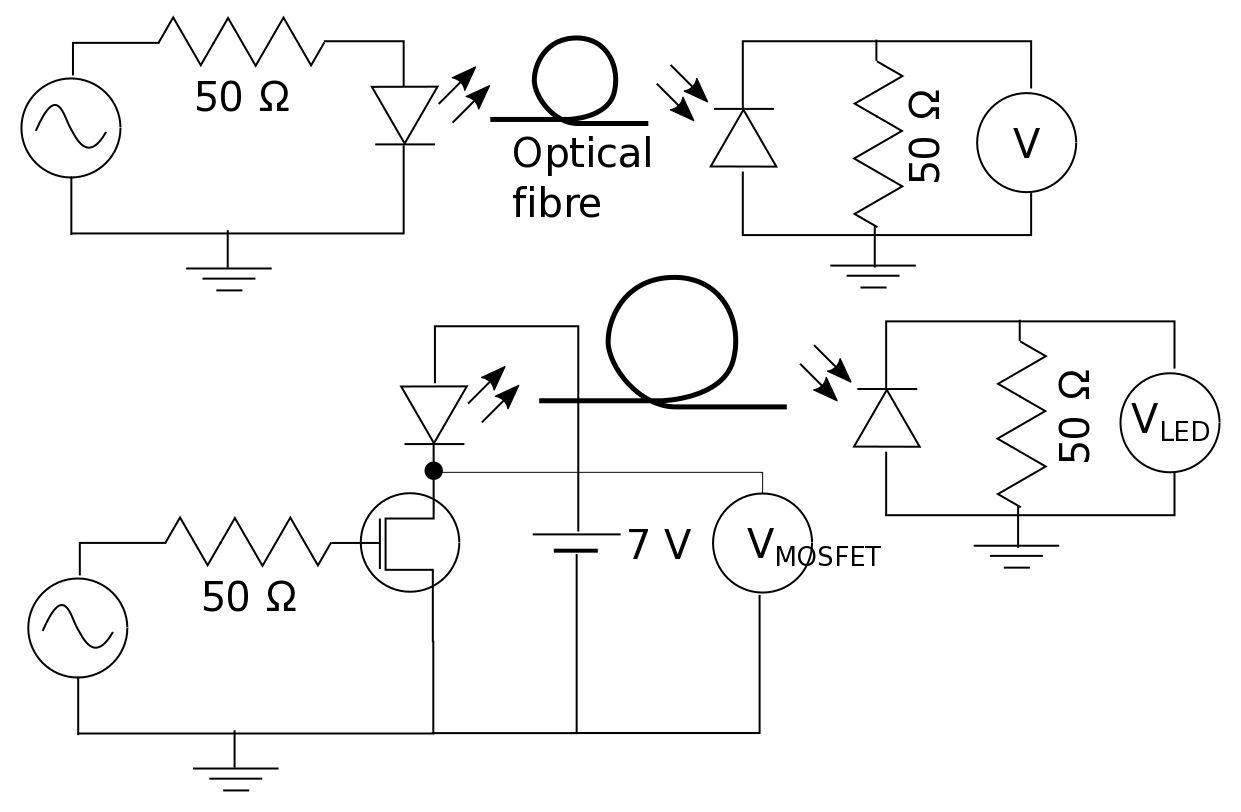 However I would like the LED to be brighter so have used a MOSFET to drive the LED, see bottom Figure 2. This does make the LED brighter but the rise time seems to be vastly increased. As well as the LED output I have also measured the voltage across the MOSFET (again Figure 1) it's fall time seems fast so the slow rise time does not seem to be attributable so the MOSFET switching time.

Any suggestions on why this occurs and how to resolve it? I have tried changing MOSFETs, with little effect.

EDIT: Lots to questions about the MOSFET and drive. I used the 50 ohm signal generator to drive the MOSFET gate. The MOSFET is a NDS351AN. The data sheet quotes a 1.3 nC gate charge. For a 5 V, 50 ohm drive I calculate this takes 13 ns to 'fill'. That is also why the MOSFET drain voltage is plotted - surely if the MOSFET switching time was an issue then the voltage would still be dropping?

Instead of a MOSFET consider a fast CMOS logic gate as a LED driver. For example AC04 with all gates in parallel. You will get low output impedance, low input capacitance and short switching times. Please use good decoupling and short connections - the circuit is plenty fast.

Alright. I see you posted a picture of the setup:

There is a squiggly ground alligator clip wire attached to the scope probe, therefore fast rise time measurements will be incorrect due to probe inductance. Therefore, I don't really trust the scope traces posted.

There seem to be long wires leading to an offscreen power supply, which hints at a high inductance in the power supply... but the tiny test PCB itself is too small to make out.

Now, I wonder if there is a local supply decoupling capacitor on this tiny board. There should also be a current limiting resistor in series with the LED.

Since none are mentioned in the description, I will go with the worst case: no resistor, and no capacitor.

At turn-off, interesting things happen. Since there is no local decoupling capacitor on the supply, once the FET is open, we have a series LC resonant tank including the wire inductance and the LED and FET capacitances. It rings, producing the huge oscillations at turn-off.

The ringing is bad enough to reverse bias the LED by more than 20 volts, which ensures a quick discharging of its capacitance, and therefore a quick turn-off. This explains why it turns off a lot faster than it turns on.

Also, if you look at the trace from your light detector (blue) you'll notice that the LED turns back on a tiny bit, when the ringing current forward biases it. But that could also be coupling between your sensor and your wiring, if it is close.

Now, the fact you post this scope trace, with such humongous ringing, and it doesn't seem to bother you, makes me think... that you kinda need help with high speed stuff.

Now... in order of complexity:

If your LED has Vf of a few volts, just drive it from a beefy and fast buffer like 74ACxx, with a resistor of course. Use a SMD part, over ground plane, with solid decoupling, clean layout, etc. For faster turn on and turn off, bypass the current limiting resistor with a small capacitor, equivalent to the LED capacitance.

As far as other methods go, if you want fast turn off, you also need a way to quickly discharge the LED capacitance when you turn it off (which the logic gate scheme provides for free). Your FET will not do this. It will switch the LED ON quick, but OFF will be slow.

Other ways to do it are complex enough... you should try the paralleled logic gates first.

I'm adding an answer as this allows images - comments don't.

I tried the following (primarily based on peufeu's comments):

Measurements are plotted below. The LED output was measured as discussed in the original question. No current limiting resistors were used (I know this is best practice but wasn't sure how to determine what I should use as I am 'off the data sheet'). 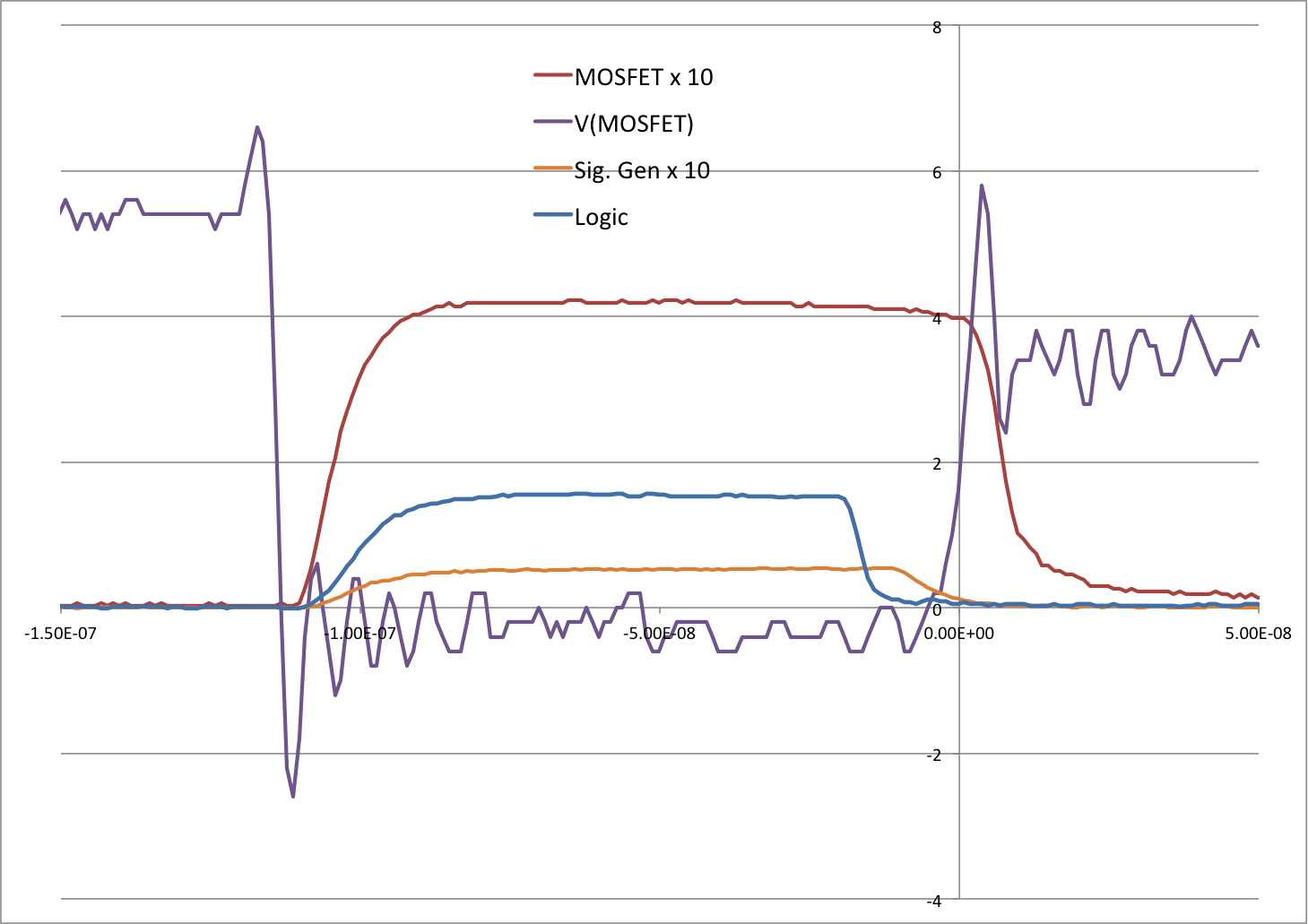 You can see that the decoupling capacitor stops the massive ringing and allows the LED to rise much quicker. Fall time might be longer though.

The inverter also works well and if I connected all the outputs should produce more light. However in my application I actually want:

So I'm going to use the MOSFET system. I have already made a prototype and it seems to work.

Thanks to everyone for their answers, especially peufeu for his detailed analysis.

For that kind of speed, think about a current based transmission mechanism. Aka bjt.

Not the answer you're looking for? Browse other questions tagged led mosfet switching or ask your own question.

1
How to choose transistor for switching bigger MOSFET
3
Calculated MOSFET switching time does not agree w/ expected results
1
PIR sensor 3.3V output driving a mosfet loaded with 24V power LED
2
How to remove turn on ringing/overshoot in MOSFET output for 1 MHz and 70V Switching?
2
How to make falling time shorter for mosfet switching for high voltage and high frequency ultrasonic pulser
2
Can a MOSFET be used for dimming instead of switching a LED?
1
Why turn-on speed of a MOSFET is linked to diode reverse recovery time
0
MOSFET to drive LED, never turns fully off