Drive LEDs in a bar from an amplifier output?

I'm working on a small-scale audio spectrum analyzer. I take an aux cord L/R inputs into two amplifiers that output to a speaker. Say I pass the output that goes into the speaker into 3 bandpass filters for low,mid, and high ranges.

I'm trying to this project with only analog components, as I realize this is a trivial task with a microcontroller.

I'm not sure if it's important or not in this type of circuit, but other than the signal output I have access to a 5V DC source that I've mainly used to bias the amplifier.

I can't quite figure out how to configure the LEDs in such a way that it matches the behavior I desire. I've searched around online and see some circuits use zener diodes to achieve this sort of effect. I think I want to turn the LEDs on through current and not voltage but am unsure how this works. I breadboarded some LEDs and played around and I couldnt get the right behavior.

As duskwuff pointed out below, the LM3914 is a great and pretty easy solution to this problem. But I hate easy. I've been messing around more and here's what I've been trying to do:

1) Rectify my signal output using a full wave rectifier. There's a problem with this though, my amplifier output signal has a minimum p-p of around 200mV. This means that at lower volumes, no signal will be rectified because the diodes will not allow current through. Could I possibly solve with with an amplifier stage between the output and the rectifier input? I have a 5V DC source available.

2) At this point I'm trying to figure out a way to use NPN transistors as switches that turn on at different rectified output levels. My success with this has been, well, very limited. At first I tried using Zener Diode's taking advantage of their zener voltage, but I looked around and I can't find any with a low enough Zener voltage that would work here. I could put an amplifier between the rectifier stage and the NPN stage, but I'm not sure thats the best solution.

I've included a picture of my entire circuit schematic so anyone can see what I'm working with here. 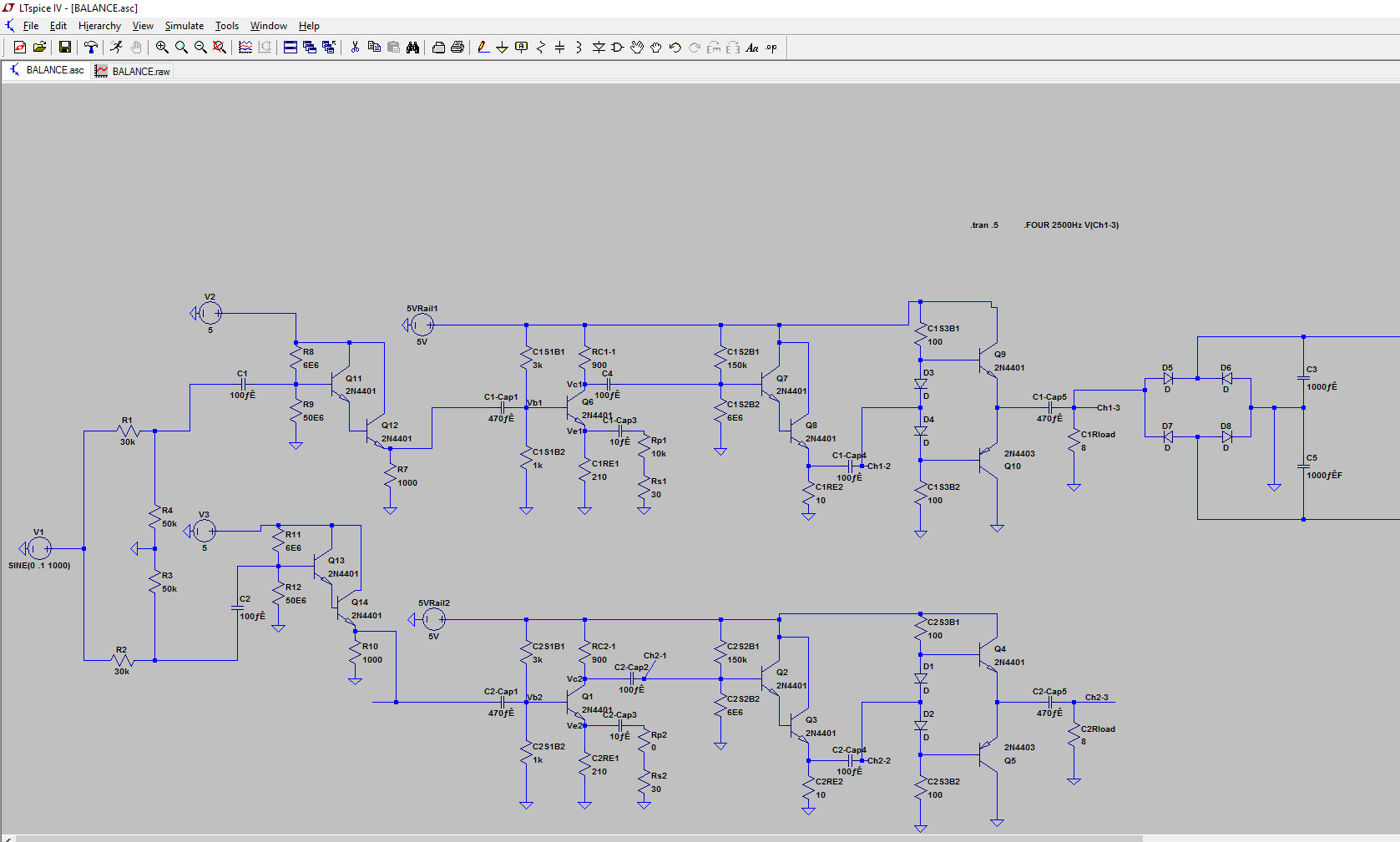 The standard part for this task is the LM3914 ("Dot/Bar Display Driver"). It functions as a multitap voltage divider, and compares the signal with the value at each tap: 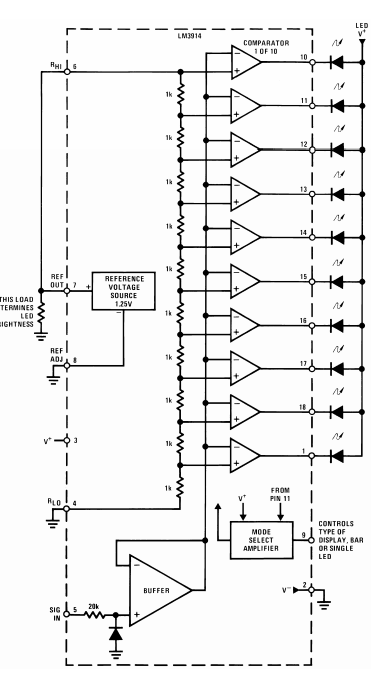 The easiest way to build this will be to simply use a LM3914 for each graph. The pinout of this part is such that you can directly drive a 10-segment bar graph LED from the chip. If this is too easy for you, you can try building an equivalent circuit yourself, but you'll need a lot of comparators to make it work.

There are chips that do this.

To do it discretely, you can use a few comparators for that.

A MCU would simplify this greatly.

just a few cents: i would NOT use a Fullwave rectifier to analyze the signal - meditate about comparators and how you can take huge advantages out of their mode of operation

second: if you want to do it right, you have to define specs. this is important. first: you choose a supply voltage, then you choose ways to split this voltage (it is the maximum available in your circuit) into 6 Parts (you mentioned 6 LEDs per Bar). After that, you rearrange these DC-Voltages for a logarithmic scale (it doesnt need to be fully accurate - say 6db per LED is okay or 3dB for finer resolution) - after that you can use these DC References and switch your NPNs.

To be honest: I would construct such a project entirely out of comparators. It is Cheap nowadays. It is also possible with discrete circuitry, but it is a lot of math, voltage division and brainfuck...Choose some quad-comparators with 20mA output and you should be able to drive your LEDs...they are cheap as crackers...

Not the answer you're looking for? Browse other questions tagged led amplifier analog voltage-measurement or ask your own question.