How to choose value of resistor in voltage divider?

The main point is current.

Now let's see how the circuits behave under load. Here's the first circuit with load. As you can see, is a 2.38 mA current going through the load resistor on the right and the voltage on it is no longer the expected 2.5 V but instead 2.38 V (because the two bottom resistors are in parallel). If we take a look at the second circuit here, we'll see that now the top resistor drops around whole 5 V while the two bottom resistors have voltage of 4.99 mV. That is because the resistor ratio have been changed here. Since the two bottom resistors are in parallel now, and we have one resistor with significantly larger resistance than the other, their combined resistance is negligible compared to the resistance of just the bottom right resistor (you can check that using parallel resistor formulas). So now the voltage output is significantly different from the 2.5 V we get in case of no-load condition.

Now let's take a look at opposite situation: Two small resistors in voltage divider and one large as load here. Again the combined resistance of the two lower resistors is smaller than the resistance of the smaller resistor of the two. In this case however this doesn't make a big impact on the voltage seen by the load. It still has the voltage of 2.5 V and everything is fine so far.

On the other hand, let's compare the current going through the divider in the circuit with large resistors on the divider and the circuit with small resistors on the divider. As you can see, the large resistors have current of just \$2.5 \mbox{ }\mu A\$ going through them and the small resistors have current of 25 mA. The point here is that the current is wasted by the voltage divider and if this was for example part of a battery operated device, it would have a negative impact on the battery life. So the resistors should be as large as possible in order to lower the wasted current.

This gives us two opposite requirements of having as small as possible resistors to get better voltage regulation at the output and as large as possible resistors to get as small as possible wasted current. So to get the correct value, we should see which voltage we need on the load, how precise it needs to be and get the load's input resistance and based on that calculate the size of the resistors we need to get to have the load with acceptable voltage. Then we need to experiment with higher voltage divider resistor values and see how the voltage will be affected by them and find the point where we can't have greater voltage variation depending on the input resistance. At that point, we (in general) have good choice of voltage divider resistors.

A voltage divider by itself is useless. The divider needs to feed its output into something. Sometimes that something is a bias-adjustment on an op-amp circuit, or sometimes the feedback voltage on a voltage regulator. There are thousands of things that a divider could be feeding.

In many cases you'll find that the input current is so high that a voltage divider by itself isn't going to work. For those circuits you might use a divider feeding an op-amp set up as a "unity gain buffer". That way the resistors can be fairly high values and not be affected by the input current of the rest of the circuit.

AndrejaKo and David have given good answers, so there's no need to repeat them here. 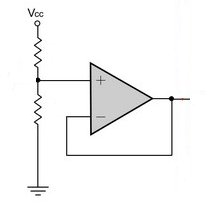 This will allow you to draw a rather high current, at least several mA, even with a small current through the divider. It may be tempting, especially in battery powered systems where every mA counts, to choose a value like 1M\$\Omega\$ for the resistors. Keep in mind however, that most opamps also have a small input current. In many applications this is negligible, but at 1\$\mu\$A (a typical value) the 1M\$\Omega\$ resistors will cause a 0.5V error, independent of the input voltage. So at 5V you won't get 2.5V at the divider, but 2.0V.

A FET input opamp has a much lower input bias current, often in the order of pA.

If the divider is intended to provide a fraction of the signal voltage to an ADC input, then there is another concern in the design: In SAR converters, for a fixed sample rate, there is a maximum allowed external impedance connected on ADC input; in order to charge the sample capacitor with the proper voltage before the next sample. Otherwise, the measurement is useless. In this case, the impedance (resistance) is formed by the parallel of two divider resistors (Thevenin).

You need to keep in mind Ohms law, E=IR and power dissipation by a resistor is V^2/R. So your resistance for Ohms law will be the top resistor (R1), and the combination of resistors will be used in the calculation for power dissipation. You can make your calculations for R1 based on this. You can then calculate R2, by the input and output voltages, and your chosen R1 value. I personally use this online calculator to make my life easier.

Not the answer you're looking for? Browse other questions tagged resistors voltage-divider or ask your own question.

11
The voltage drops measured across very high value resistors do not add up - why is that?
7
Upper limit for resistance values in voltage divider?
5
Which values for voltage divider
0
How do I determine what range (not necessarily value) of resistors to use for voltage dividing
1
Arduino Nano: How to decide voltage divider values that are safe for the input of the ADC
0
Determining values of voltage divider resistors which interface an OpAmp and an input impedance?
7
Efficient way to regulate voltage
8
Zero or low-current voltage divider for switch identification
0
How to read a high voltage logic signal with pic microcontroller
0
How to measure duty-cycle with Input Capture from STM32F103C8T6?
See more linked questions