Size factor of capacitors now and then?

I have a motor at home, it's a soviet era motor. It's connected to what seems to be a capacitor. 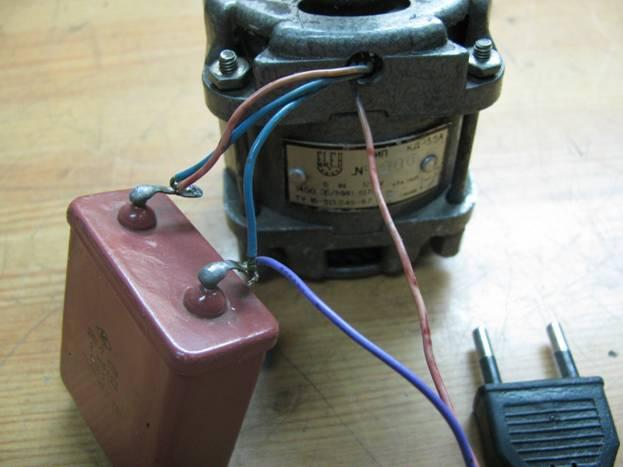 I was wondering if there was a particular reason why the capacitor is so big. If it's just that now capacitors for the same specs can be much smaller than the ones in the 70s.

Also I don't really understand the wiring of the motor. Mine is wired pretty much the same way except I have a switch that lets me change the rotation direction. I can't tell much for now as I'd have to dismount everything to access the readings to get a better idea. What I can tell is that this is a 127v AC motor. Here are the markings:

To my understanding, the capacitor is used to somewhat limit the current to something around 127v. So tecnically, I could replace the beefy capacitor by one of same value that I gather from broken fluorescent/led lamps?

The pictures are taken from this article: How to connect a 127v motor to 220v (Russian)

So technically, I could replace the beefy transistor by one of same value that I gather from broken fluorescent/led lamps?

In principle, yes. But the small motor in the picture is only rated for 6 watts of power, and you need to ajust the size of the cap depending on how much your motor needs. Note that the cap is also rated for 400 Volts (X or X2 cap).

Not the answer you're looking for? Browse other questions tagged capacitor motor or ask your own question.

10
Serial capacitors in electronic ballast of a fluorescent lamp
8
Asynchronous motor with motor capacitor sometimes won't run backwards when it should
0
Relays to control both directions on tubular motor using Raspberry
2
Is there a reason why we don't use higher rated voltage capacitors?
1
Is it safe to leave a capacitor between the + and - wires of a circuit, while the rest of the circuit is turned off?
1
Identifying motor type and guidance on how to build controller