Where should a switching regulator be placed in relation to analog and digital circuitry?

I've partitioned a mixed-signal board as follows:

The dashed blue line indicates the analog/digital divide, but it is NOT a ground cut. This layout is intended to avoid analog and digital return currents from overlapping.

Note that one of the mixed signals ICs is an 18-bit DAC operating at 5 Volts. This means it has a voltage resolution of approximately 19 microvolts. I want to keep noise below this level to get full performance out of the chip.

The power from VCC is immediately routed to a switching regulator. It in turn feeds various low-dropout linear regulators. Each LDO regulator is used to power either analog or digital circuitry (not both!), and is placed on the analog side or the digital side accordingly.

In order to minimize noise in the analog and mixed signal circuitry:

Here's a new layout that uses the feedback I've received: 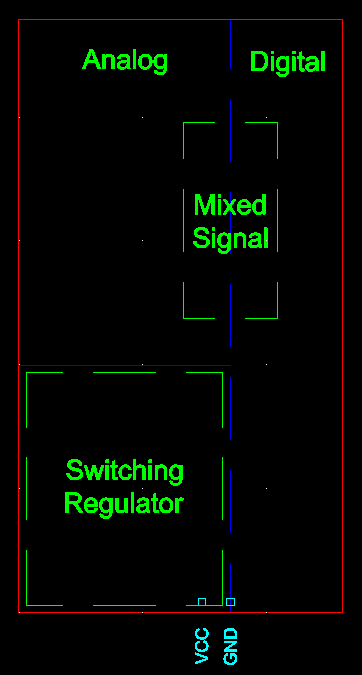 The solid blue horizontal line is a ground cut, while the dashed blue vertical line is not. No traces run through the ground cut.

A horizontal ground cut seems like the right thing to do. In conjunction to the cut, with the regulator on the bottom left, I would try to arrange the regulator such that both the power in and out flow naturally through the right with no trace crosses the cut. I don't know what is sufficient since you are going for 19uV resolution.

Suppose the SwitchReg chops 1 amp at 100 nanoSeconds. Support there is a vulnerable trace, 4" away (0.1 meter) with height above the GROUND plane of 0.02" (1/2millmeter). The trace runs for 0.1 meter. How much trash will the SwitchReg induce in the trace?

How will you keep the SwitchReg Hfield away from the DAC? steel shields?

[edit] here is the topology: 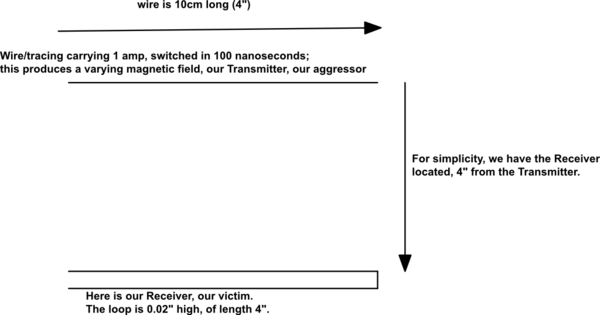 Not the answer you're looking for? Browse other questions tagged layout switching-regulator mixed-signal or ask your own question.

4
How to route power in split-plane layout?
5
Routing Digital Signals to an Analog Circuit
0
Does placing digital circuitry between the regulators and analog circuitry cause grounding problems?
1
Where do I put digital ground in a dual-rail mixed signal circuit?
1
How to create a mixed signal pcb
0
Multiple PCB system vs mixed-signal PCB
0
LM2678 Switching Regulator Voltage Dropout Under Load and extreme Input Distortion
0
How to prevent switching direct and/or inductive noise on a PCB?