I am new in the world of electronics and am having trouble understanding an example circuit found in the LM139 data sheet. I created the circuit on a breadboard and it does indeed work, but I am not understanding the current flow and WHY it works.

http://www.ti.com/lit/ds/symlink/lm2901-n.pdf The circuit in question is figure 28(Limit comparator) on page 16 of the datasheet. 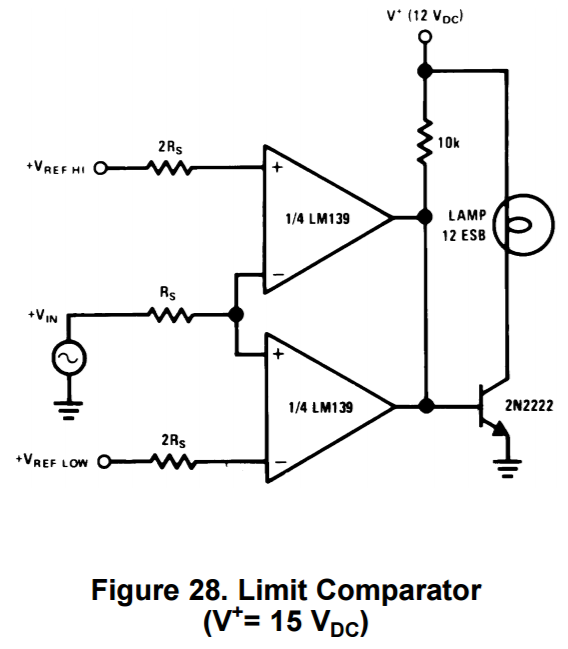 Since the output of the LM139 is an open collector, when both comparators are "HI"(the input signal is in between the non-inverting pin of comp 1 and the inverting pin of comp 2), would that not sink the current to ground by turning on the internal transistor and not allow the voltage source to activate the external transistor? Could someone walk through how this circuit behaves?

When both comparators are "HI", their output transistors are off; you can imagine that their outputs are disconnected. In this case, current flows through the resistor into the base of the 2N2222 and turns that transistor on, allowing current to flow through the lamp.

When either comparator is low, and its output transistor is on, that shorts the base of the 2N2222 to ground, turning it off.

The polarity of open-collector comparators is treated the same as an equivalent opamp - if the positive input is higher than the negative input the output would go positive. That is the output transistor does not conduct.