Modelling a capacitor whose dielectric has resistance as a circuit element

The issue of 'how to model the capacitor' arises if the dielectric of a parallel plate capacitor has a finite resistance. 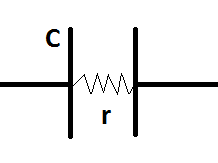 This model will immediately run into problems because:

Therefore, this model will fail.

After trying Idea #1, the next attempt would be to analyze if considering the dielectric resistance to function as a resistor in parallel. 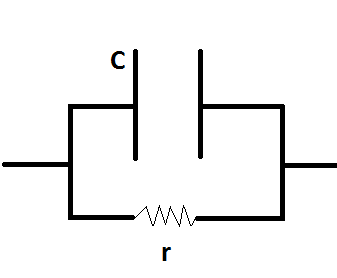 This idea has the following problems:

How do you model a capacitor which has a finite resistance?

Would I need to go scrap all the capacitance and resistance concepts and start from the fundamentals?

Charge up the capacitor to a fixed voltage and wait. The real capacitor will discharge slowly because of the finite resistance of the dielectric. The simplified model exhibits the same discharge due to the resistance across the ideal capacitor.

With a steady voltage applied externally, both also result in the same current, which is the voltage divided by the leakage resistance.

In general, the first order approximation of a capacitor is simply a ideal capacitor. For many uses of real capacitors, this is good enough.

The second approximation has a resistor both in series with a ideal capacitor, and one in parallel with it. The series resistance is referred to as the ESR (equivalent series resistance). This can matter in real circuits, especially when the cap is subjected to high currents.

The parallel resistance models the leakage inherent in the dielectric. This is so little (resistance so high) in ceramic capacitors that it can usually be ignored. However, leakage is more significant in other types, like electrolytic, and must be taken into account in some applications.

You seem fixated on this 'constant current'. Olin has given a perfectly acceptable answer so I'll try and debunk your fixation. 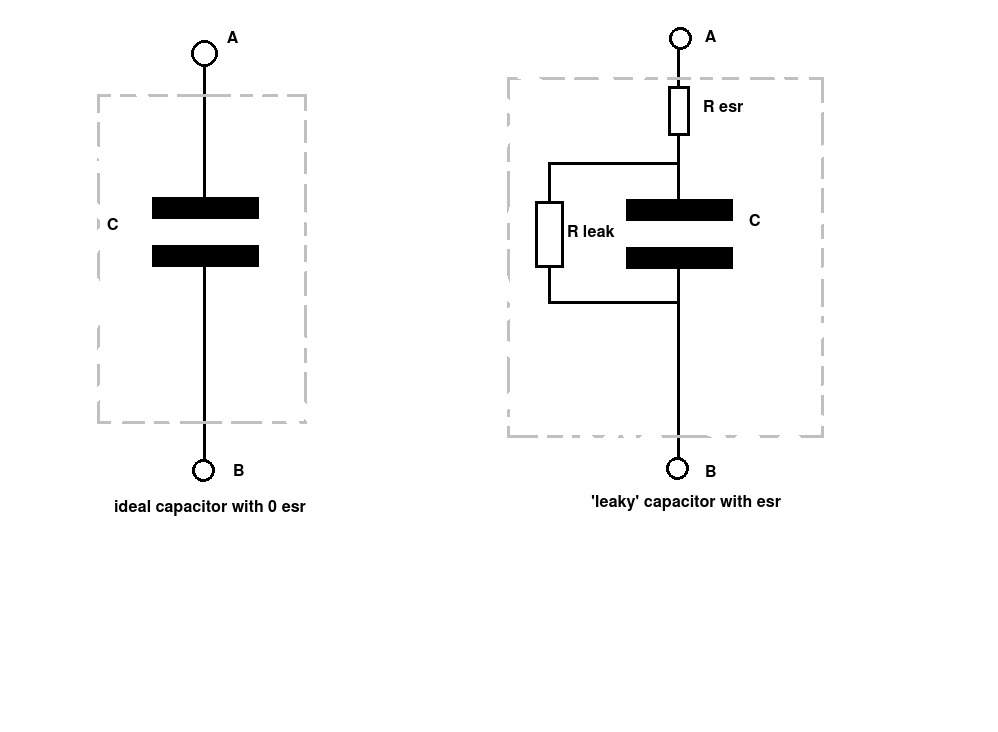 One ideal with infinite resistance between plates and no ESR.

The second (with identical capacitance value, C) but with ESR and a 'leaky' dielectric (= R leak). (the sort you might actually buy in the real world)

Let both capacitors be charged up to the same voltage, V, between their terminals A and B and then totally isolated from any external circuit.

Held in a vacuum, inside a Faraday cage to screen them form external fields etc.

The first capacitor (the ideal one) can neither gain or lose charge so its voltage remains constant. No current can flow between the plates.

The second capacitor (the real one) will start to lose voltage and a small current will flow between the plates as it discharges. With no current taken from the terminals there will be no voltage drop across R esr so the voltage measured at the terminals (with an ideal voltmeter) will be the voltage across the plates.

A small current will continue flow between the plates following the normal exponential decay of a CR circuit reducing the voltage across the plates but never reaching zero volts.

This current is NOT CONSTANT as you state. That would suggest some sort of infinite energy source with the ability to create charge (ya canna change the laws of physics, laddy!). The leakage current is always reducing with time, it is asymptotic to the axis.

What would happen if we connected an external resistor with the same value as R leak in parallel to our 'ideal' capacitor?

Just to drive the point home about the size and nature of this 'leakage current by looking at the numbers.

We don't get close to 'infinite time' before we are unable to measure or detect the 'leakage current'.

This 'constant current at infinity idea' is totally busted. You don't have to introduce any new concepts or change any existing concepts about capacitance and resistance.

As regards the 'ideal' capacitor.

(1) Without an external resistor it would neither gain or lose voltage regardless of time. It would simply stay charged forever with no leakage current.

(2) With the external resistor conected (R leak) to drain the charge it would behave exactly the same as our real world example, reducing the 'leakage current' to a value (in finite time) where we were unable to detect or measure it.

If we disregard the effects of the magnetic field, the potential in the capacitor will be distributed linearly from one plate to the other. That means you can just consider resistance and capacitance independently and model the capacitor as an ideal capacitor and an ideal resistor in parallel.

So what's your problem? To quote:

After reading the various comments, I had the idea to test some electrolytic capacitors to find out if their parallel resistance \$R_{leak}\$ is constant or it is a function of the capacitor voltage.

One of the methods uses the simple formula:

The slope (\$\frac{dV}{dt}\$) could be measured at the discharge starting time of a capacitor whose initial voltage is \$V_m\$.

So I will try to design a simple MCU tester to measure \$\frac{dV}{dt}\$ at different \$V_m\$ (for electrolytic capacitors only). I think I will find out that R_leak is minimum at \$V_m\$ which is close to the capacitor rated voltage and maximum close to 0V. But if the difference between the two limiting values happens to be small, one may consider that \$R_{leak}\$ is constant and equals to their average.

Not the answer you're looking for? Browse other questions tagged capacitor resistance circuit-design or ask your own question.

4
Charging capacitor bank with current limiting circuit
6
Modelling Capacitor Leakage
3
What is meant by "capacitors try to try to maintain voltage at a constant level"
12
Make energy out of a capacitor in the sea
0
Charge density (σ) and distance between plates of capacitor given just the relationship between potential difference (V) and width of a metal slab?
1
Voltage divider circuit load resistance?
0
Why the euclid distance between the plates of the capacitor has been doubled to find out the capacitance?
1
What will be the steady state Charge distribution of given configuration- battery vs capacitor
0
Modelling ESR of a parallel plate capacitor