How does series feedback pair work? (the art of electronics) 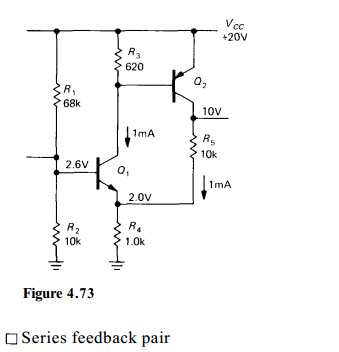 I'm studying AOE but i can't figure out how this circuit even works(also i'm confused if Q1 and Q2 make a sziklai pair). any help with the circuit description will be great.

Overall feedback is between R5 (10K) and R4 (1k), which yields an overall voltage gain near ten. And because feedback is to the emitter of Q1, input impedance becomes quite high. Like FakeMoustache, I've never heard of "Sziklai pair", and have "invented" this circuit for my own use. Kudo's to Sziklai for publishing first.

Q1 converts its base input voltage to current. It has less-than-one voltage gain, but a portion of its collector current change feeds into the base of Q2. In this case, the base of Q2 presents a dynamic load resistance to Q1 of about 26 ohms times its Beta of about 100 (because its emitter current is about one milliamp). So dynamic input resistance of Q2 is near 2600 ohms. That's in parallel with R3.
Open-loop gain is quite high, compared to closed-loop gain of ten. So Andy's approach is a good one. Here's a slightly different approach..consider what happens if you raise the input source a small amount (say 0.1v) from 2.6v to 2.7v. If Q1's emitter stayed at 2.0 v, Q1 would conduct very much more current, pulling its collector voltage down. But it must also pull down Q2's base voltage too. That will increase Q2's base current a great deal, which multiplies by perhaps one-hundred at Q2's collector. That increase in Q2's collector current must flow through R4 and R5, pulling up output voltage.
How high will output voltage rise? It will rise until the voltage drop across R4 nearly counteracts the initial disturbance of 0.1v. Because R5 is ten times larger (and carries the same current change as R4), output voltage must rise nearly one volt. Voltage gain is nearly ten, since a 0.1v input change causes a one volt output change (slightly less than one volt). I'm assuming that output is taken from Q2's collector.

Not the answer you're looking for? Browse other questions tagged transistors amplifier analog or ask your own question.

3
Speaker BJT amplifier function
1
How does a NPN 2N2222 transistor work?
3
How does the circuitry work in the Symet robot?
2
The Art of Electronics, figure 2.10B
1
Beta reduction capacitor in Sziklai Pair speaker driver
4
How does a class G/H amplifier work?
3
Current mirror: is there a name for this NPN-PNP pair, and how does it work?