Now one requirement that needs to be fulfilled in Vhf tuner circuit is that the gain should remain constant at all frequencies of the entire vhf band(that need to be coupled). According to the figure L2//C2 and L3//C3 is not coupled directly so there is no transformer action between them. They are only linked via Lm.

So to make gain constant for whole passband and to achieve this special techniques are being employed and one of them is involving mutual inductance to manipulate the gain in predetermined way. The equivalent mutual inductance m is the sum total of various planned and unplanned coupling prevalent in the primary circuit.

The eq. mutual inductance m, seeks to maintains its value constant around every frequency of the vhf broadcast band. This is possible because m has two component one is fixed and other is variable with frequency. This variable component is higher at high frequency. This variable second component is subtracted from the fixed one so m is less at high frequencies and at lower frequencies vice versa making m a little high. So in both of these cases m has been observed to put its value apparently constant thus maintaing gain constant over the frequency range in demand.

The how does this is possible to maintain gain constant in the below circuit if the circuit is not mutually coupled..?? 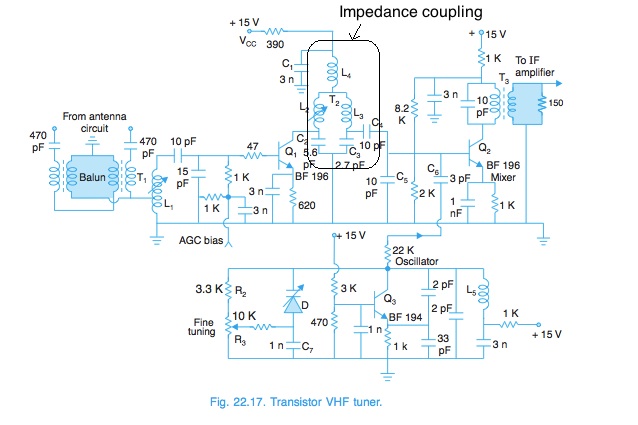 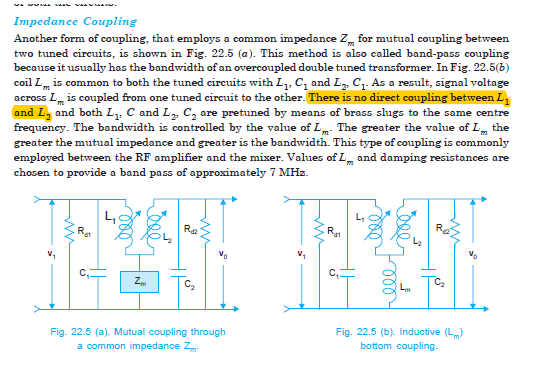 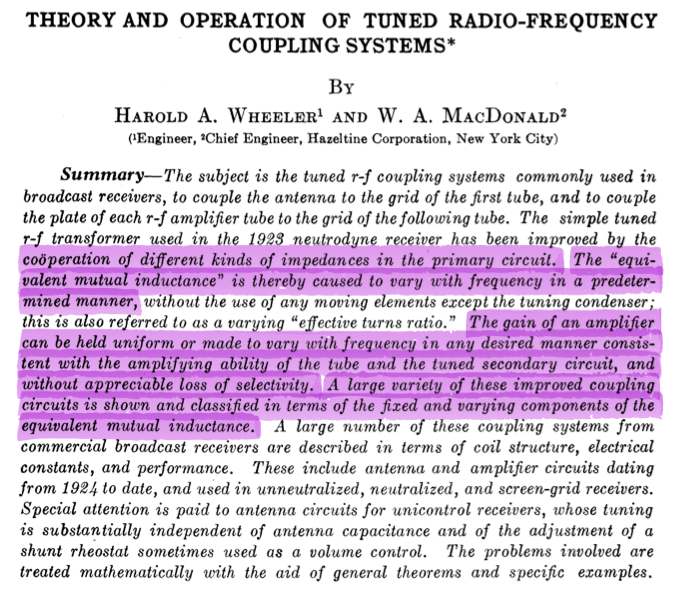 This schematic ought to be shown in a more familiar LC filter arrangement to show the response more clearly as I have a done below. 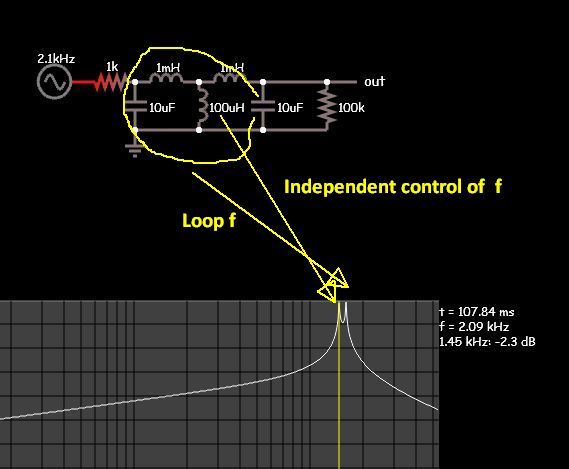 The centre shunt coil independently controls the 1st pole when its L impedance is lower. While the outer loop of series L's and shunt C's controls the other pole. Q is controlled mainly by source impedance ( such as a current source with load R.) while load impedance ratio affects slope of skirts.

Rather than call it Inductive coupling, it is more accurately impedance ratios of series/shunt elements that control the response.

A simple FM filter is shown that I quickly designed. (not optimal) 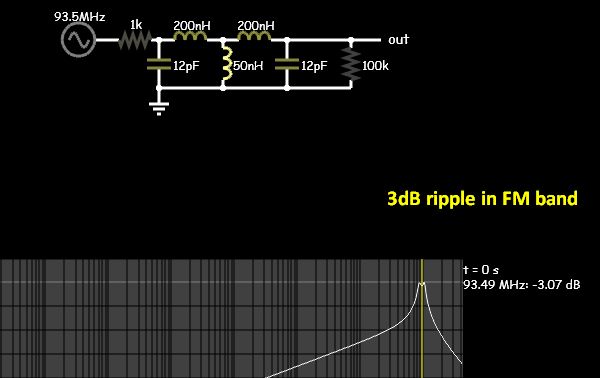 Note above the FM filter requires both series L and shunt caps to be the same to tune the upper pole for equal peaks and the centre shunt L tunes the 1st pole is 1/4 of the series L elements.

Your title of this question is misleading.

None of this filter arrangement provides "Maintaining constant gain through impedance coupling". This is done by AGC bias control in the preceding active stage. You might want to edit your question to reflect the details in the question such as LC double tuned filter without mutual coupling.

This circuit is complex. The transistors add their own frequency dependent loadings to the reactive circuit, there are coil losses and a couple of resistors, too. The resonant circuits are surely NOT having the same resonant frequency. Fortunately at least the local oscillator seems to be behind a substantial resistor.

It can be well possible that as the coupling increases due the reactace increase of L4 as the frequency goes higher, it will be compensated by increased losses and detuning.

11
What is the advantage of a Sallen-Key filter over a normal second order filter?
0
455 KHz Double tuned IFTS for Wideband MW AM reception

4
Modify an AM/FM radio to an airband receiver: What, if any, changes to the demodulation circuit?
0
DIY Ultra High Frequency
5
Impedance matching an RLC circuit (inductor macroscopically drawn on PCB)
14
Eliminating mains hum from frequency modulated RF LC oscillators
5
How do I design a DC-block cap without interfering with my filter?
1
Help understanding the SPICE input impedance - why does it seem lower than I expect?
0
Ideas sought for RF impedance selection
0
Matching network and filter design