Lithium Battery Pack - Do I need BMS within parallel connections?

Let's assume I am going to build a Li-ion battery pack with 12 18650s, where I connect four cells together in parallel and then the three sets of four in series.

My understanding is that a BMS (Battery Management System) keeps an eye on the voltage and keeps it from going too high or too low. Thus, would I then use a BMS module that connects three batteries in a series, or would I need to have a BMS with 12 connections, including the cells that are connected in parallel.

TBH, I am not at that level yet, but just trying to understand the nuances of li-ion batteries before I get my hands dirty.

For the most part, putting cells in parallel just makes them behave like a bigger single cell. So, if you take four cells and hook all of them together in parallel, it appears to a circuit to just be a single cell with four times the capacity.

BMS's are built to manage cells in series. Along with current and voltage protections, it monitors each "cell" in the pack to make sure its voltage is within limits, and if any one cell dies prematurely it will cut off the whole pack to prevent the other cells from reverse-charging the dead cell.

Your configuration is "3s4p" - three groups of four parallel cells wired in series. Thus, you need a BMS that can manage three cells in series - a "3S" BMS. Generally speaking, it's irrelevant how many cells you put in parallel in each cell group, as long as all the groups have the same number of cells at similar capacities (i.e. you do not want to put one parallel group of 3 cells in series with a parallel group of 4 cells), since the BMS will see your parallel groups as single larger cells and will manage accordingly.

The cells you put in parallel are no longer considered 4 cells in parallel but are now considered one cell with more capacity and able to source more current safely (if your bus is up for it.) There is no need to put multiple leads to this grouping.

The leads monitor each series groupings only. So if you have a battery that is 10 cells in series and 7 in parallel, You monitor the 10 and not the 7. 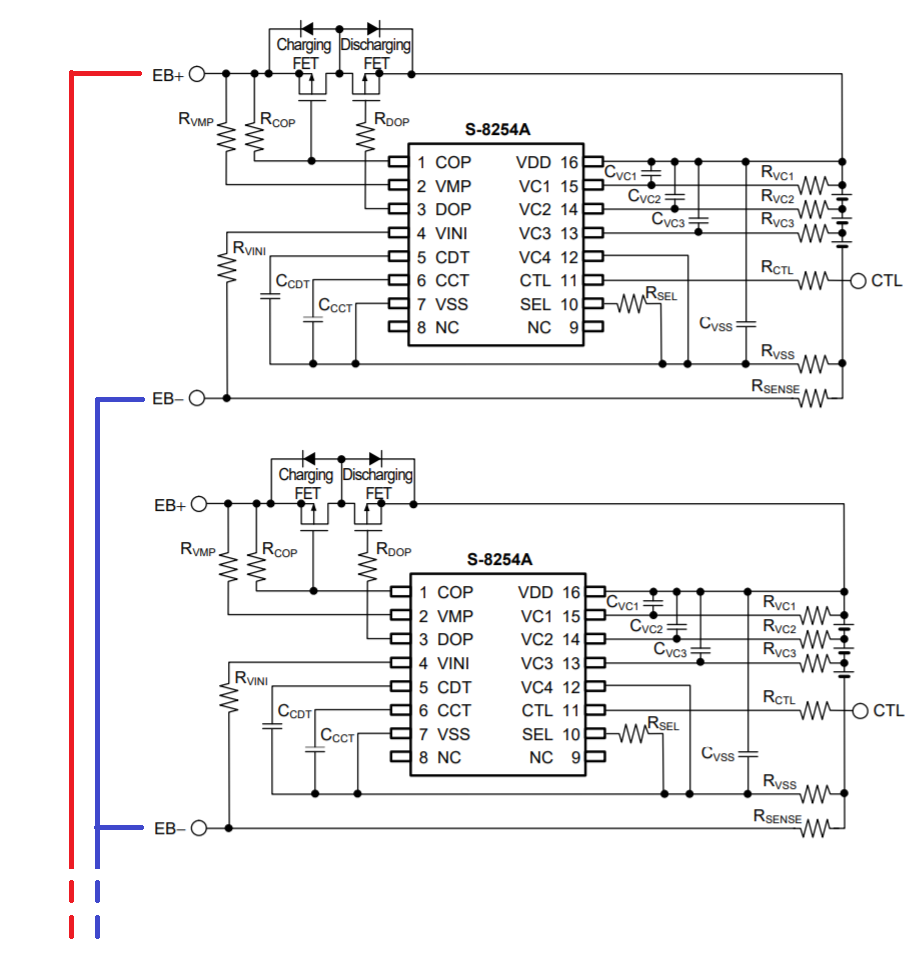 With 4 parallel sets of 3s you'd have 4 BMSs and only make parallel connections at the ends of each series chain.

Someone please educate me if I'm wrong, but to give the correct solution he's looking for, he should make a 3s4p pack with only one bms connected to only the 1St set of 3 in series.

My understanding is you have a number of options here with the most common being 1 BMS connected across the series cells as just described. The issue I see with this is that in a large pack 1 or more cells could fail (lose capacity/voltage)and you would not know with this arrangement. All that would happen is you’d lose capacity in that group of parallel cells. If your BMS does balancing then this will probably lead to excessive balancing

You’d need some kind of capacity tracking or balance tracking in the BMS logic to trigger alarm/action if this occurred.

2
Hotplug li-ion in parallel for a custom battery pack
0
Determining Faulty Lithium Batteries in Battery Pack
3
Lithium Ion Battery Pack - Looking to calculate watt-hours from V1 to V2
5
Do I need a BMS for Li-ion batteries connected only in parallel?
0
Battery Pack Design: Charging Parallel 18650s Through a Step Up Converter and BMS
4
4s battery pack, how to build?
2
Can I make endless parallel li-ion connections?
3
Connecting battery packs in parallel and series, each with their own BMS
0
Lithium ion battery pack charge current