What is the name of this connector on the end of a serial cable (not DB9)?

I just found that a piece of hardware I would like to connect via a serial port uses a non-standard hardware connection.

One end is a female DB9 the other is what I think is an "old" telephone connector, but I can't seem to find the name of it. Here is the pinout of both the connectors from the manual for the device 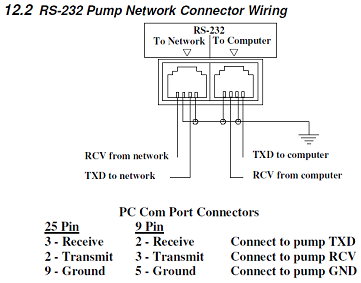 What is the name of this 4-wire/4-pin connector?

That is a 6P4P modular plug (6 position 4 pin) often mistakenly referred to as an RJ11. An RJ45 was also mentioned in the answers. RJ45 is often incorrectly used for 8P8P (8 position 8 pin) modular jack. RJ stands for registered jack and each number used after it refers to the wiring scheme originally used. RJ11 and RJ45 have been used incorrectly for so long they are now excepted terms much in the same way "scotch" tape is used for any "cellophane" tape.

You should look at the specs for that piece of hardware and see if they have a wiring scheme for their equipment. It depends on what you are connecting to that serial port and how you plan to use it. Some things to consider; is it DTE or DCE, will you need to used flow control, what is the baud rate going to be, does your cable need to be a "null" for what you are doing such as programming VIA the serial port.

Not the answer you're looking for? Browse other questions tagged serial connector rs232 rj45 or ask your own question.