Does the electric field travel mostly on the surface of the copper in a standard circuit?

I read somewhere that the electricity flows mostly on the copper surface.

When high frequency AC signals are present, the current in a wire flows mostly near the surface. This is called the skin effect. It's main effect is to increase the apparent resistance of the wire as the signal frequency increases.

Are they talking about the electric field or the drift that is mostly on the surface?

Probably currents, and only at high frequencies. Significant electric fields tend to be found mostly outside the copper altogether.

Since it is not possible to have an electric field with out a magnetic field is a radio wave being sent out each time an electric circuit is turned on and if so WHY DOES IT NOT transmit continuously ?

You are correct that generally when there are AC signals in a circuit, it will generate a radio wave.

However when we learn circuit theory, to keep things simple we start out by learning about lumped circuits. This means we assume the circuit is physically small compared to the wavelengths of a radio wave at the frequency of the signals in the circuit. A consequence of this (and the reason for making the assumption) is that the circuit will not radiate very efficiently, so that we can neglect the power loss due to the (very small amplitude) radio waves being produced.

In the real world, this assumption may not be valid and we do indeed need to worry about these radiated radio waves, both because they affect the circuit operation, and because they might interfere with other circuits (say, a radio receiver) nearby.

The electric field exists between the conductors and is shown below as the black arrowed lines: -

What is mostly on the surface are the signal-induced oscillating electrons (except at DC because there is no AC magnetic field and therefore no induced eddy currents at the centre of the conductor). It's called skin effect: - 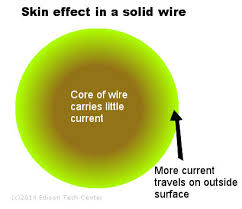 is a radio wave being sent out each time an electric circuit is turned on and if so WHY DOES IT NOT transmit continuously ?

To transmit a radio wave most effectively you need to match the impedance of free space. This means the electric field has to be \$120\pi\$ times the magnetic field. Difficult to achieve on conductors that might be a tiny fraction of the wavelength of the power/signals used. The electric field is usually the hard bit to get to be the right ratio. It's easy to make a wire loop and transmit a magnetic wave a few inches or even metres but to do that effectively at sub 1 MHz needs wires that are tens of metres in length.

Having said that, every transient on every wire produces potential interference with other circuits located close by.

Wow that's one huge question.... I'm going to try to explain this as simply as I can.

Let's supposed I could see you from here.

Hold your mouse in your hand in front of you. OK I see you.

Now quickly lift your hand above your head...

I wont see your hand above your head till the light from your hand reaches me... i.e The SIGNAL you just made reaches me at the speed of light.

NOW. Electromagnetics is just another form of light.

With electricity, a voltage, can be thought of as a HEIGHT of energy. If you are at one end of a wire and have zero voltage, then suddenly raise it to 5V, again, I wont see it at this end till when?

That's right, the speed of light.

However, electrons have nothing to do with it.

NOTHING physically moved between us when you raised your mouse arm and I saw it. When you raise a voltage at one end of a wire, again NOTHING needs to move between the ends of the wire before that change is detectable at the other end.

And yes that is basically how radio works. For radio communication you create a large enough electromagnetic wave that can be detected at great distances.

So what about current...

Ok you raised your end of the wire to 5V. I'm pinning my end to ground. When I detect your end has risen.. by the field... electrons will start pouring out my end.

OK so maybe that bit confuses you. So let me explain further. Bob the electron sits in a flat space, maybe in your wire, happily minding his own business. Suddenly his floor is tilted. He will begin to roll downhill. When you raise the voltage at your end of the wire, the Bob that's at my end does not see the floor tilt till that voltage field propagates through space to my end.

Now suppose you start waving your end up and down.

As you surmise, yes you now start producing a spherical electro-magnetic waves that go out in every direction... sort of like ripples in a pond... at the speed of light.

Now as for the skin effect. Yes you have heard correctly, moving electrons will prefer the surface on a conductor due to something called eddy currents and the fact that they are an anti-social lot and don't like each others company.

The eddy effect increases with frequency and current flow.

What that means is, when sending signals or an a.c. waveform down a conductor the resistance of that conductor increases with frequency and current since you are using less and less of the inner material. This is why power lines are usually in sets rather than single cables of the same weight. You can push more power through four smaller cables.

AS for "WHY DOES IT NOT transmit continuously " I am not sure what you are asking there... but maybe the rest of this answer made that a mute point.

Just go to the Wikipedia page about skin effect. That should give you at least a starting point.

The changing magnetic field in the wire forces the current out of the wire, is a simple explanation. This is also why power transformer cores are built with metal plates and ferrites are made with small metal particles.

Not the answer you're looking for? Browse other questions tagged electromagnetic electricity or ask your own question.

0
How does a ferromagnetic object entering a solenoid affect the magnetic field?
24
How does an inductor store energy?
0
Does my electric clearing field actually make ions?
0
Electric field measured in the far field of an antenna
1
In a DC circuit with one battery and one resistor, why does the voltage drop remain the same irrespective of the value of the resistor?
0
To use a Dual Voltage Electric LED Bulb E26 in a E27 environment/ socket?
1
Why are E and B field in phase in far-field electromagnetic wave propagation?
0
A DC current through a inductor does not create electric fields