I have the electricity meter pictured. 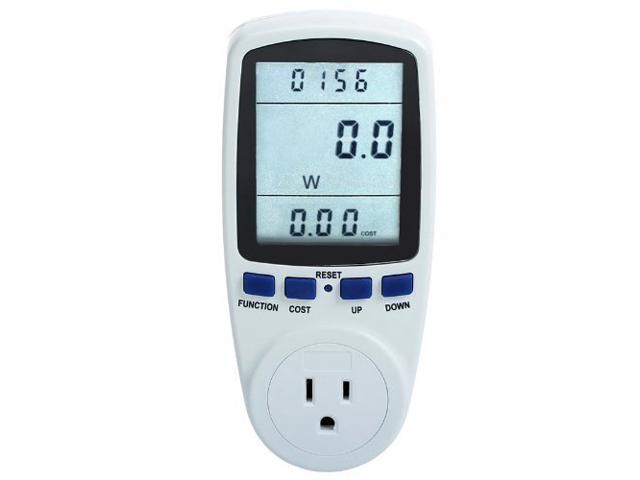 When I attach various devices I get readings (amps, volts, watts) that are proportional. Expected values are a few percentage points off from the readings.

Why would the meter produce such readings?

Your appliances are not using the AC waveform evenly.

A heater or incandescent bulb would draw evenly -- at any given instant, amps would be proportional to volts, and the numbers would be as you expect. Try it on a heater.

But everything you mention is an electronic load, with a switching power supply. They tend to draw their highest current on the shoulders of the AC sinewave, drawing less current in the higher-voltage center of the sinewave since their goal is constant watts.

So if a meter is taking thousands of samples per second, you might have a load that draws 30 watts truly, but draws a peak 1A on the shoulders and averages 0.4A (given that its ampere draw is close to nil at center and zero-crossing). Which one does your meter report?

It would be neat if the power company/grid could only generate the 30 watts that you're actually using. But that would be a big mess to distribute (lots of harmonics that transformers aren't tuned for)... so very roughly speaking, the power company must generate and distribute that full 1A at 120V. How do we describe that in material terms? We can't say watts since that unit is used for the actual draw, 30W. So they created a new unit called VA - Volts x Amps.

A difference between Watts and VA is typical of switching power supplies, especially cheapies. Switchers can be designed to draw evenly like a lightbulb, but it costs more.

Power factor is an old measurement designed to reflect how inductive loads' current draws are out-of-phase with voltage. This meaning has been stretched to describe this situation.

So this hypothetical 30W, 120VA switcher will have a rather terrible 0.25 or 25% power factor. VA is unitless - a ratio - since both units are derived from volts*amps.

So - how is this meter measuring? You'd have to consult the manual or the manufacturer to see how it deals with VA and power factor. My name-brand Kill-a-Watt will display watts, VA and PF directly.

The current and voltage waveforms are not in phase due to the design of that loads power supply, so the real power consumed is smaller then the apparent power (Given by Vrms * Irms), the ratio is known as the power factor.

Note that domestic users are charged only for real power, something not true of industrial users.

The electricity meter is measuring 120 V and up to 15 or even 20 A current maximum. The maximum power is therefore 1800 W or 2400 W. Those meter usually have only one current measurement range. If the current precision is 1 %, the power precision is 18 or 24 W. You should forget the digit after the point.

The monitor current value is a maximum, for a white screen at full contrast and maximum brightness. It is not a bug, it is a feature when this monitor uses less current and power during normal operation.

Voltage is more or less good sine wave. But current is not! Current for such loads is a pulsed waveform of double frequency, hugh amplitude and low duty cycle. This is because the way AC/DC supply works these days: rectifier and switching DC/DC.

So first, power cannot be estimated by multiplying rms voltage by maximum or average current. Second, to measure the power you meter must have very good adc resolution, low noise and high sampling rate. All that is completely opposite of mass production of cheap meters. Trust me, the probably save money by omitting capacitors.

Bottom line, i wouldn't expect to anything better than you describe.

Why would the meter produce such readings?

In an AC system, power doesn't equal V x I except when the load is purely resistive. For any other loads you have to take into account power factor. Power factor (in it's simplest form) is the cosine of the phase angle between voltage and current waveforms.

So, using a linear load such as an inductor or capacitor and a resistor: -

Power = VI cos(phi) where phi is the phase angle.

For non-linear loads such as virtually any electrical appliance with a DC circuit inside it becomes much more complex to explain but, I guess you are not ready for that yet?

Not the answer you're looking for? Browse other questions tagged voltage amperage watts meter or ask your own question.