I am trying to get this well known circuit [

work inserted in a series of 69 LEDs to protect them according to this specification. Transistor is 2N2222, hfe=18 according to multimeter. The free-running current is 19mA and I use Rcl=100R to limit Iout to 25mA. Calculating R1 is uneasy, so I made the following tests.

more than 1mA (Imin(max)) must be supplied in to the cathode pin. Under this condition, feedback can be applied from the Cathode and Ref pins to create a replica of the internal reference voltage.

OK, OK, but how do I supply the 1 mA that seems to be required for correct operation? I see no minimum Vi spec and the TL431 seems to increase its resistance as I lower R1.

Another concern is that rather much less that 19mA flows in RCL.
What does a constant VBE=0.7V mean? Perfectly conducting?
And, BTW, how does the TL431 in the off (<2.5V) state know what VB=VK=to output?

Update: thanks for your answers and you want more detail. I have bought 5730 LEDs corn cob lamps. They are cleverly very simple: Basically: mains, dephasing cap, MB6S rectifier, smoothing cap, LED chain. Cap's cos φ aka power factor determines the voltage at the LED chain. Some lamp models use pairs of parallel LEDs like 2×36. My 95 and 36 LED models are OK. But the 69 (or 2×36) LED ones constantly failed in some homes of this country. I replaced burned LEDs with a 220kΩ resistor but more LEDs burned. I suspected over-voltage peaks and that current limiting is something to try. So, I wired data sheet's fig 38 in a delicious layout on a 2×5 holes veroboard. Component wires folded and 3 solder points, no need for soldering pads. I can tuck it inside a E25 lamp socket well immobile at the end of a hard wire. But the value of R1 is not clear and I found no simple howto on the Web.

Just random remarks here and there plus 7.1-7.4's "no Vi minimum".
So, the best was to try R1 values and that took me here, thanks for your answers. So, Fig 38 "limiter" should be called instead "Vi≥5 current limiter" which is not my case. Your advice: use fig 39 with a separate 5V Vi. Unfortunately, the lamp PCB provides no 5V (and forces LEDs on - ground side).

So, I want a low Ik at 1 mA. I finally figured that I can add some 100 Ω resistor between collector and + source. Then, relative to negative ground, Vi will be higher. What do you think of that? I will try when I'll have time and probably come back here.

You state the you want to run 96 LEDs ...is that a string of LEDs in series?
If it is then you have other problems with a 20 mA constant current driver.

Working out the resistors for the TL431 is very simple, consider this simplification from Figure 39 of the datasheet. 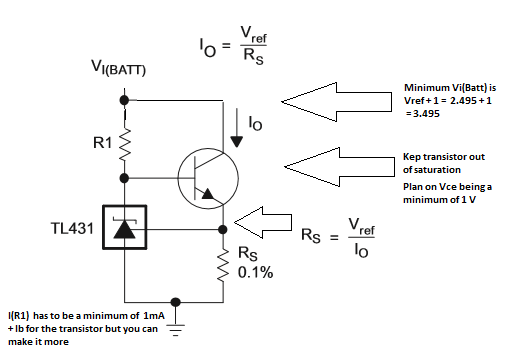 The circuit of Figure 38 seems non-ideal for your application (if it's a string of LEDs you want to drive), and Figure 39 modified slightly may be better: 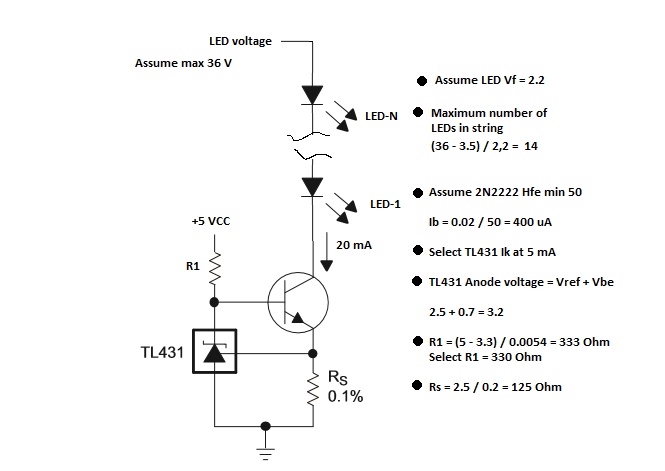 Here I've used LEDs with a Vf of 2.2 and a supply of 36 V, if it's different for your LEDS or supply, then you'd have to recalculate the values.

If you drive the LEDs from a low side constant current source than you get a couple of advantages...

If you want to run 96 LEDs as a string it might be done as below: 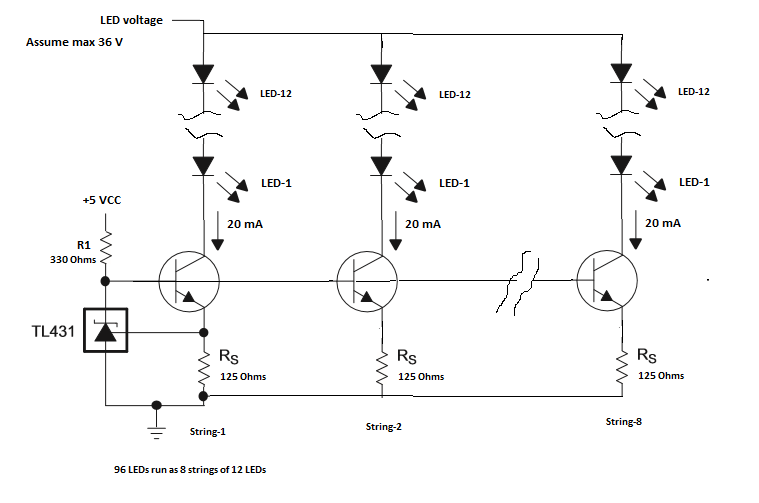 Here with each 2n2222 Ib at 400 uA, there is still 2.2 mA current in Ik, well above the minimum requirements of 1 mA.
Each string of LEDs is now only 12 devices instead of 14, but the voltage (Vf) difference for the string simply appears across the 2N2222. So Vce would increase by 4.4 V. This does increase the power dissipation in the transistor, but it's well within it's ratings.

Note that you could put more LEDs in a string and reduce the number of strings, but you'd have to increase the Vce of the transistor. The 2N2222 is only 40 V Vce.
You could also use a more capable power FET instead of a transistor, but this increases the complexity of the design in terms of minimum voltage etc.

the circuit needs 2.5v+0.7v + something else to work. so you are looking at 3.5v or more as a starting point. testing it below that makes no sense.

as to the sizing of R1: check the datasheet for min or max values, or calculate the power dissipation on tl431 and see if it gets too hot.

I think the problem is that you didn't ever operate the TL431 correctly, looking over your three cases. If I had to guess, your approach was just random shots without design and in all three cases you missed the target entirely and are wondering how it is supposed to work.

[And before I go there, are you seriously considering 69 series-arranged LEDs?? Is this supposed to eventually be a mains-powered thing?]

Let's start with an overview schematic for the two simpler constant current topologies for the TL431 (I'm using an SCR symbol for the TL431 here) on the left side, below: 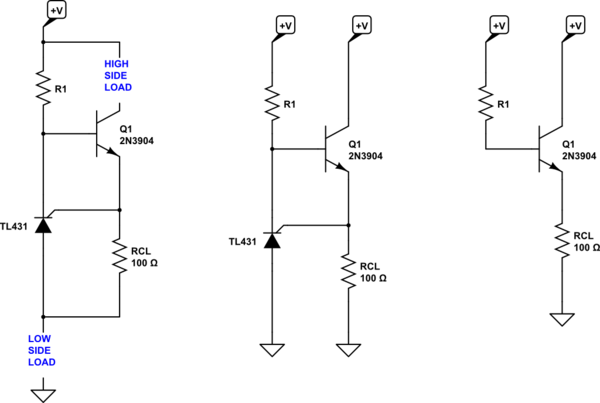 The load can be inserted into either of the two locations shown, given that the other location is shorted when there is no load there. There are reasons for both approaches. But I think you are just testing this, for now, by shorting both of them. So you are, in effect, testing with a \$0\:\Omega\$ load. So your circuit looks like the middle one, shown above.

For a moment, let's consider the case where the TL431 doesn't admit any significant current because it doesn't have enough headroom to work with. In this case, you can basically remove the TL431 and instead consider the circuit shown on the far right, above.

Now, this gets back to the question of how you intend to operate it eventually. Are you serious about 69 LEDs in series?