Can someone explain this tube amplifier circuit for me?

I have a tube radio that has really low output (I mean the sound is barely audible at full volume). Probably some capacitor in the LF amp failed. However, after I downloaded the schematic diagram, I was intrigues and confused by the design of the output amp. While I can (most likely) repair the amplifier by testing the capacitors, I want to learn about electronics too. In this case, why it was designed as it was. 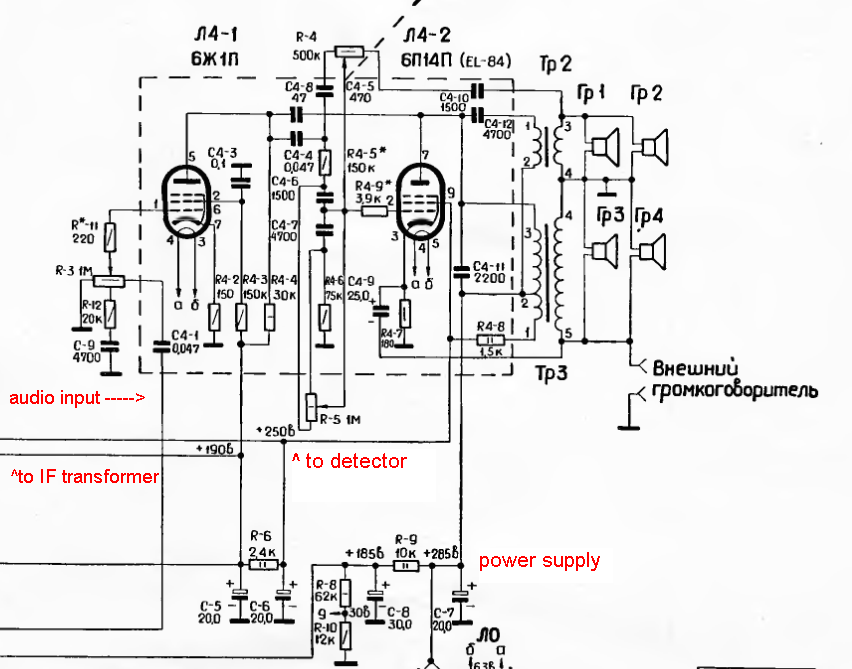 The left pentode is a 6ZH1P small signal pentode and the right pentode is the Soviet equivalent of EL84.

I understand how a basic grounded cathode amplifier works, but this one has some weird (to me) parts, for example:

EDIT: The actual fault was a leaky C4-7.

First, I think it's more likely these ancient tubes are no good anymore than the capacitors having failed. Except perhaps for the power, which is easy enough to check, these capacitors are probably wrapped foil or something else that is dry and should last a long time. Start by checking the supply voltages. Those appear to be well marked. If the power input diode has gone bad, then nothing else has much chance or working.

As for the circuit, I am somewhat confused too. I'll take a rough stab at it anyway. To really understand it would take more time working thru it than I want to spend on it.

The left tube seems to be a pretty straight forward amplifier. The amplified signal appears on the plate, which is then coupled into the power stage thru C4-4. Most of the mess between C4-4 and the control grid of the right tube looks to be a tone control. That's just from the general form. I haven't actually analyzed it. I think R5 is likely some sort of tone control. I'm less sure about R4, but R4 and R5 together may be something like bass and treble controls.

The strange part is how the two output transformers are hooked up. I'm guessing that the top two speakers are meant to be tweeters, the lower two the rest of the sound range, and the strange connections between the double transformer is like a crossover network. This also leads some credance to R4 being a treble control since its signal is driven from the feedback from the top transformer output.

C4-9 and R4-7 feed back a bit of the signal at TP3 onto the cathode of the power tube. This looks like classic negative feedback to provide predictable gain and a flatter frequency response.

The section of the circuit you show here can be easily enough tested in isolation. First, make sure the two power supply voltages are as marked, then feed a signal into the line you labeled as audio input. That should be clearly audible on the speakers.

Just some general information about tubes that might help shed some light on this ..

Screen grids were normally connected to the positive supply to help provide a more constant electric field inside the tube, while the output signal was collected as anode current. The idea is that, as a relatively sparse electrode, the screen grid intercepts very little of the electron flow, so the voltage there will not fluctuate with the signal very much. The anode, by contrast, takes the full brunt of the electron flow, and so anode voltage can vary greatly with signal current. In a triode, the anode serves two functions: (1) to provide the large anode-cathode electric field in which the control grid has its modulatory effect, and (2) collect the resulting current, which provides the output of the tube. By separating these two functions, and assigning the former to the screen grid, the negative feedback effect of varying anode voltage was removed.

So it will be fairly common to see a screen grid attached in some way to the supply rail (oft called 'B+') while the anode current will be passed through a coupling transformer, or through a load resistor and coupled onward via capacitor.

In this case, the output of stage one is loaded by the 30K R4-4 and coupled to the 2nd stage by the 0.047uF C4-4. Then there's a big network that combines that, and some feedback, to drive the control grid of the 2nd stage. The output topology of this amp is kind of complex looking. It looks like they've integrated a cross-over circuit directly into the amplifier output. Looks to me like your lower frequency range is driven into taps 2 and 3 of Tp3, while the higher frequency stuff goes through Tp2. Someone with more time on their hands could probably work out the breakpoint between high and low frequency.

The first stage is straightforward. The only things to mention: the negative feedback by omitting the decoupling of the cathode and the physiologic volume control using a tap on the control potmeter. The tone control is also comprehensible: it is a Baxandall control. The high f control is R4 (controlling the ratio of the feedback voltage from the high f output trafo and the input stage) and R5 is the bass control. The output stage: the upper trafo is coupled in parallel with the bass and mid range trafo via C4.12. The C4.11 in parallel with the prime of the bass trafo is a bit funny: it short cuts to some extent the high frequencies so for the high trafo there is less left. I guess this is to balance the hi/low ratio of the speakers. The output stage feedback is also classical via C4.9 from the speaker output to the cathode. Removing will raise the amplification but it's not advisible: tube amps need feedback in spite of what some people say. The real unsure thing to me is the connection of the screen grid of the output stage with the output trafo. It is a positive feedback. I guess it is to boost the low frequencies. We have to bear in mind that there is a low pass filter between the output trafo and the screen grid by R4.6 and the elco C6. So the feedback works not for high freqs. Added: the last remark can be overruled: it is a anti-hum wiring. The 100 Hz ripple runs through the output trafo and cancels the hum from the plate.

I have the feeling, the reason for feeding power through R4-8 from P1 of Tp3 to the 250V supply is to null out the audio noise on the 285V supply, caused by the loading from the output stage (not the supply ripple).The audio impressed on the supply by the pulsed discharging of C7 is 90 deg. out of phase with the audio out, and cannot be nulled, BUT, electro's have some internal resistance called 'effective series resistance', or ESR, due to the electrolyte layer. The audio impressed across it IS in phase, and can be nulled. When the valve current increases, P3 swings negative, and the supply is also loaded down a bit. P1 potential pivots up to fill in the dip. On the +ve 1/2 cycle when the current decreases, the inductance of the transformer pulls P3 above the supply. Also, the supply is less loaded & rises slightly, so P1 pivots down to flatten the peak.

The tone controls are the same as used in modern equipment with separate bass & treble controls. They look a bit confusing, because the treble one (R4) is an active Baxandall control, using feedback, and the bass one (R5) is passive. The tap on the volume pot is to give more bass at low volume (what the loudness button does), to compensate for the low level frequency response of your ears. The capo across the trafo sent me a bit tropo. The only thing I can think of is that, because this circuit is part of an AM radio, and the audio bandwidth of the AM band is only 5KHz, anything much above that is only noise, like the hiss from the oscillator/mixer. C4-11 is probably there to filter it out.

Not the answer you're looking for? Browse other questions tagged amplifier radio feedback vacuum-tube or ask your own question.