I've been staring at this problem for two days now and can't get the correct transfer function. I've modeled it in Simulink (Matlab) and find the magnitude of the transfer function to be ~ $$H(s) = \frac{s+20}{s+0.028}$$

I'm getting huge numbers when trying to solve it so I must be doing something wrong. I've applied KCL to solve for the currents going into the parallel combo. Can anyone offer guidance? My work is shown below. 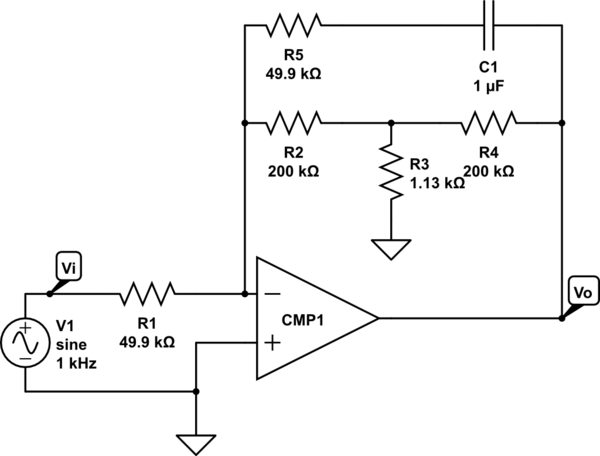 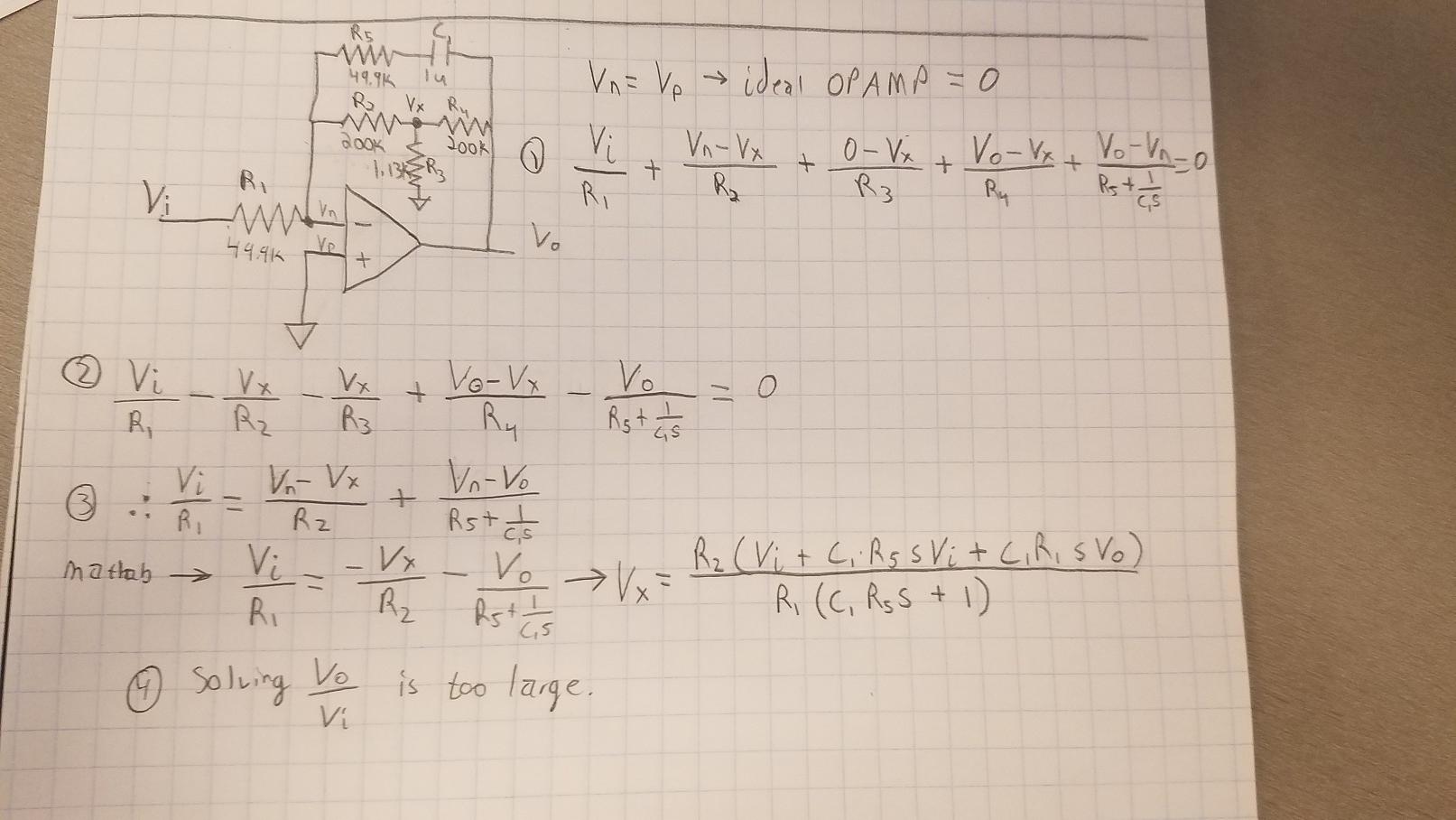 Can anyone offer guidance?

I'm thinking the big issue you have is R3 in that it goes to ground half way along the feedback path. If so then my advice is convert Vo, R3 and R4 to a much smaller voltage source (Vx) in series with one resistor.

Now go about applying the feedback in your equations but using the above.

Lets start by calling the junction of R2, R3 and R4 x. We know the inverting input of the amplifier is at 0V so what's the voltage at x?

I'll leave this as an exercise as I do not want to do your homework for you but I hope I've shown enough for you to see how to approach this kind of problem.

You can obtain this transfer function using Fast Analytical Circuits Techniques or FACTs. You start by determining the gain for \$s=0\$: remove capacitor \$C_1\$ and determine the quasi-static gain \$H_0\$. Several options are available to get there. The most straightforward is superposition. Determine \$V_{(-)}\$ by setting \$V_1\$ to 0 V then by setting \$V_o\$ to 0 V. If you solve \$V_o/V_1\$ you should obtain the dc gain:

The second option uses the Extra-Element Theorem or EET (https://en.wikipedia.org/wiki/Extra_element_theorem). The principle is the following. Identify an element in the circuit under study that is bothering you. Here, \$R_3\$ is clearly the one. Determine the gain when this element is either removed (set to an infinite value) or replaced by a short circuit (set to 0). This is what we call the reference gain or \$H_{ref}\$. In this example, we will determine \$H_{ref}\$ when \$R_3\$ is removed. The dc gain in this mode is straightforward:

Ok, we have the dc gain but what about the pole? Same as before, reduce the excitation to 0 V and compute the resistance seen from \$C_1\$ terminals in this mode. If you do well, you should get:

The zero is determined by a possible impedance combination in the transformed circuit (meaning \$C_1\$ is replaced by \$1/sC_1)\$ which could prevent the excitation to reach the output thus creating a null in \$V_o\$. Obviously, this is the series combination of \$R_5\$ and \$1/sC_1)\$ which can become a transformed short. The zero is thus located at

This is it, we have the complete transfer function written in a low-entropy format:

You can find more about these fast analytical circuits techniques in an APEC presentation taught in 2016: http://cbasso.pagesperso-orange.fr/Downloads/PPTs/Chris%20Basso%20APEC%20seminar%202016.pdf

Not the answer you're looking for? Browse other questions tagged voltage operational-amplifier amplifier transfer-function gain or ask your own question.