Below is an example, I can move 1N4004 because it is not a LTspice imported component but the rest I cant move which are imported from LTspice: 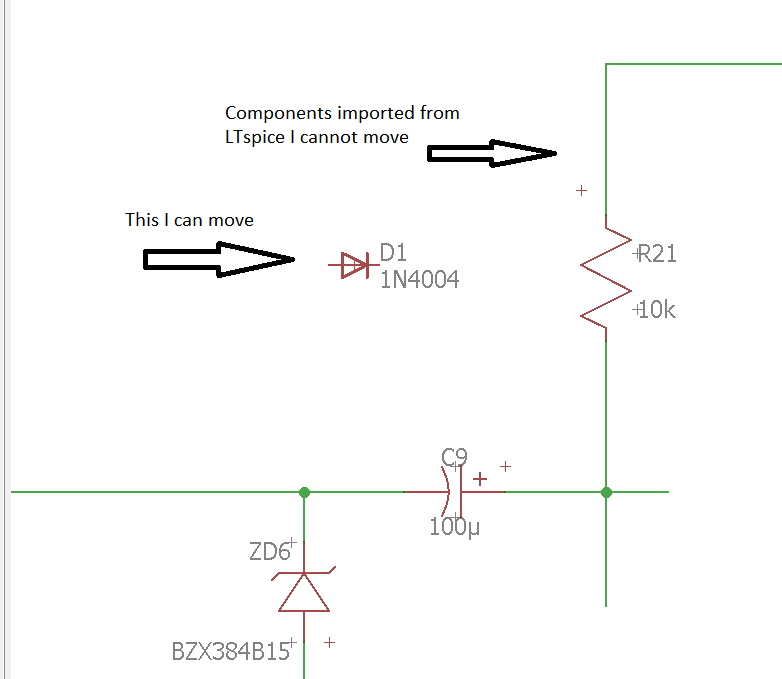 Does anybody experience the same issue? Or is there a solution to this?

edit: I think I needed to left click on plus sign. But is there a way to move only the component in Eagle? In LTspice there is two options drag and move where you can only move the component without the wires.

Is that possible to do in Eagle schematic as well?

I don't see a little + sign in the middle of the resistor, for example. That means that the resistor wasn't added to the schematic properly as a device. It was apparently just drawn in the symbols layer.

If so, this is bad, as Eagle doesn't understand the connections between parts, and even that there are parts in the first place. All you have is a bunch of graphics in the schematic that happen to look like parts.

Basically, the script or whatever you are using to import this data is flawed.

On closer inspection, I do see the little plus signs for the components. They are quite a bit off from the centers of the parts, so I thought they were missing before. For example, the + origin marker for the resistor is above and to its left, halfway to the end of the arrow. The one for the diode is below and right of the part.

This means you probably do have a valid schematic that Eagle understands as such, but a rather annoying one. To move a part, run MOVE, then left-drag with the mouse on one of the little plus symbols.

Not the answer you're looking for? Browse other questions tagged eagle ltspice or ask your own question.