What does this denote in the schematic?

I am designing a PCB for a VFD clock I want to build and I have come across something in a schematic for a voltage regulator that I have no idea what it means. 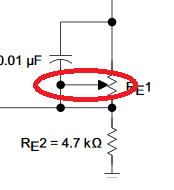 I have circled what I do not understand in red. I'm curious as to what this is supposed to denote. I do not want to fry any chips or blow up VFDs.

That's called a potentiometer, or "pot" for short.

It is a fixed resistor between the two ends shown top and bottom in your schematic. The third terminal, shown with a arrow in a standard schematic symbol, is a wiper that contacts the resistive strip in a place that depends on how the pot is adjusted.

The net result is a fixed resistor end to end with a variable tap someplace within that resistance.

This is also the basis for most old volume knobs. One wrinkle with adjusting volume is that humans perceive volume logarithmically. There are special pots called "log taper" where the resistance along the fixed resistor varies logarithmically, not linearly. If a pot isn't specified to have log taper, then you can assume it has linear taper. Log taper pots are harder to find now that volume controls are generally implemented digitially.

In your schematic, the pot is used as a rheostat. That's a 2-terminal variable resistor. That's what you get when you short the wiper to one of the ends, or leave one of the ends open.

Not the answer you're looking for? Browse other questions tagged resistors schematics potentiometer rheostat or ask your own question.

1
Can a single potentiometer be hooked up to multiple fans to control their speed?
0
Schematic Confusion: How to connect the Ground Terminal?
1
Standard for CW, CCW on pot schematic?
1
Schematic Question with electronic button
3
What is this connector symbol?
0
Unkown symbol in schematic
3
Understanding Voltage/Power line arrows in complex schematic
0
Making sense of potentiometer connections
0
Schematic suggestions for a beginner
0
MC33269ST-5.0T3 Voltage Regulator, does it exist?