Current through a resistor and diode in series

A sample graph of diode i-v characteristics and load line: 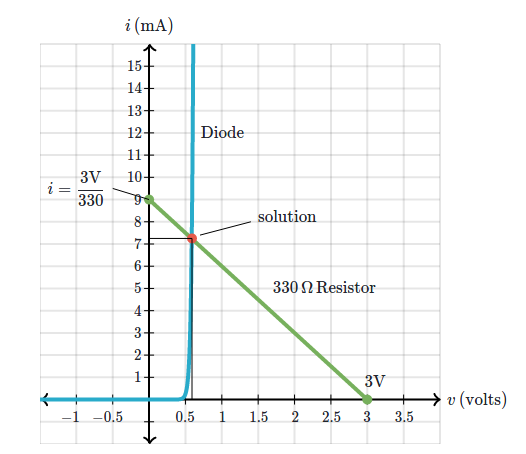 Edit: voltage through the diode will not increase that much

But it is known that current through the diode will not increase that much(a tiny increase will happen).

Once the diode is turned on, a change in voltage across it will cause a large change in current, not a small one.

Isn't this a contradiction that elements connected in series shares the same current ?

No. The load line graph shows exactly what will happen. If you increase the source voltage, the green line will shift to the right. Then you will find a new intersection between the IV curve for the source+resistor and the diode.

Another way you know this is not a contradiction is that the fact the resistor and diode currents are equal was a fundamental part of drawing the load line graph.

The two curves are

The \$v\$ on the x-axis is the voltage across the diode. The \$i\$ on the y-axis is the current flowing in common through all three elements in the circuit (source, resistor, and diode).

Nope.. The current increases at the same rate in the diode. It is the voltage across it that does not change that much.

As you raise the voltage, it simply means the resistor will have a greater voltage drop across it and generate more heat.