When should twisted pair wires be used?

I know several applications where twisted pairs are used and why they are used in those applications, but I would like to know more about the advantages and disadvantages of using twisted pair wires so I can choose appropriately based on what I am designing.

As an example, I understand the use of a twisted pair in differential signaling. This helps reduce noise because both wires receive the same interference which can then be removed by a differential amplifier.

I also remember reading quite a while ago about an induction forge where the power output was significantly lower than anticipated. The guy figured out that the separation of the power leads to the electronics enclosed a large area, creating extra inductance (which acted as a low-pass filter decreasing the power factor). By taping the power wires in a bundle, the stray inductance was removed.

It seems that twisted pairs offer benefits when inductance or induction are concerns, but this is where my understanding terminates.

What are the advantages and disadvantages of twisted pairs, and for what applications does this make them beneficial?

EDIT: The issue of inductance does not appear to be addressed elsewhere, indicating one application for which twisted pairs are helpful, which isn't addressed outside this question. Similarly, a comment raised the issue of added capacitance, which is not addressed in the linked question.

There are two key advantages to twisted pairs

The obvious down-side is cost. You will pay a little more if you buy a twisted pair or you can twist them your self but if you consider your time is not free this is an extra cost too. 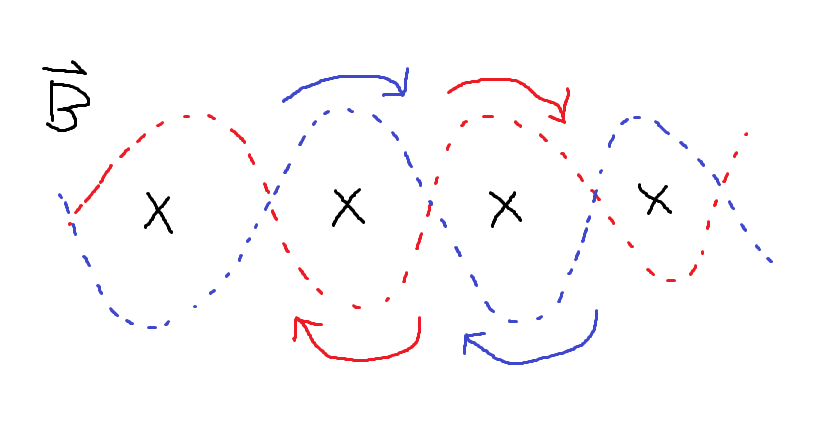 The black X's are an increasing magnetic field pointing into the page. The integral form of Faraday's law says $$\oint \textbf{E} \cdot dl = -\int_S \frac{\partial{\textbf{B}}}{\partial{t}} \cdot d \textbf{s}$$ In words this means that there is voltage induced around loops of the wire. As illustrated below, the voltage induced on one wire in one loop is cancelled by the voltage induced in the same wire on the next loop.

Not the answer you're looking for? Browse other questions tagged twisted-pair or ask your own question.

4
Twisted-pair wire's effect on Common mode noise
16
What if there are an odd number of twists in a twisted pair cable?
0
Crosstalk between Wires in a single Twisted Pair
2
3 wire signal to 4 core shielded twisted pair
0
Twisted pair's effect on power supply rise time
8
Is there any benefit to using twisted pair for short-distance I2C?
1
Why we don't use twisted cable in dc power?
0
How best to allocate signal wires to 4 twisted pairs that best reduces inteference
11
Why do UTP pairs need different pitches?
0
Twisted pairs incompatible with very slow ground-referenced signals?