I’m in the process of sketching up and collecting knowledge on electromagnets for a project I’m working on. It’s basically going to be a organ-sounding electro-acoustic instrument. It’s an array of metal tines, taken from an old toy piano, where each tine has its own dedicated electromagnet, driving it and ressonating it. It’s more or less the same principle as this tine organ by Matt Steinke: (https://www.youtube.com/watch?v=xzoJBfUODbA). I’ve tried to get a hold of him, but got no answer.

I’ve built various electro-acoustic instruments based on driving electromagnets with homemade pwm-modules, but I need these to be stronger and more precise, so I need to gain a proper understanding of how to build my own. Eventually the whole thing will be controlled through an Arduino and should accept MIDI input and so forth, but as of now, I need to get electromagnets down before I move on.

I’ve made an electromagnet recently, that works and will make the tine sing when hitting its fundamental frequency, but it’s not powerful enough and seems to heat up quite quickly.

I’ve made a less than ideal one recently using the following: An iron bolt as a core (M8 size), plastic washers, nut, a single layer of insulation tape around the core, enamelled cobber wire (unknown gauge, taken off a small transformer), wrapped in one or two layers of insulation tape. It’s wound using a hand drill, probably not ideally, since the wire had some twists and turns here and there coming off the transformer shell, but I tried to wind the coil in the same direction every time. I can’t be sure about amounts of turns using the method. 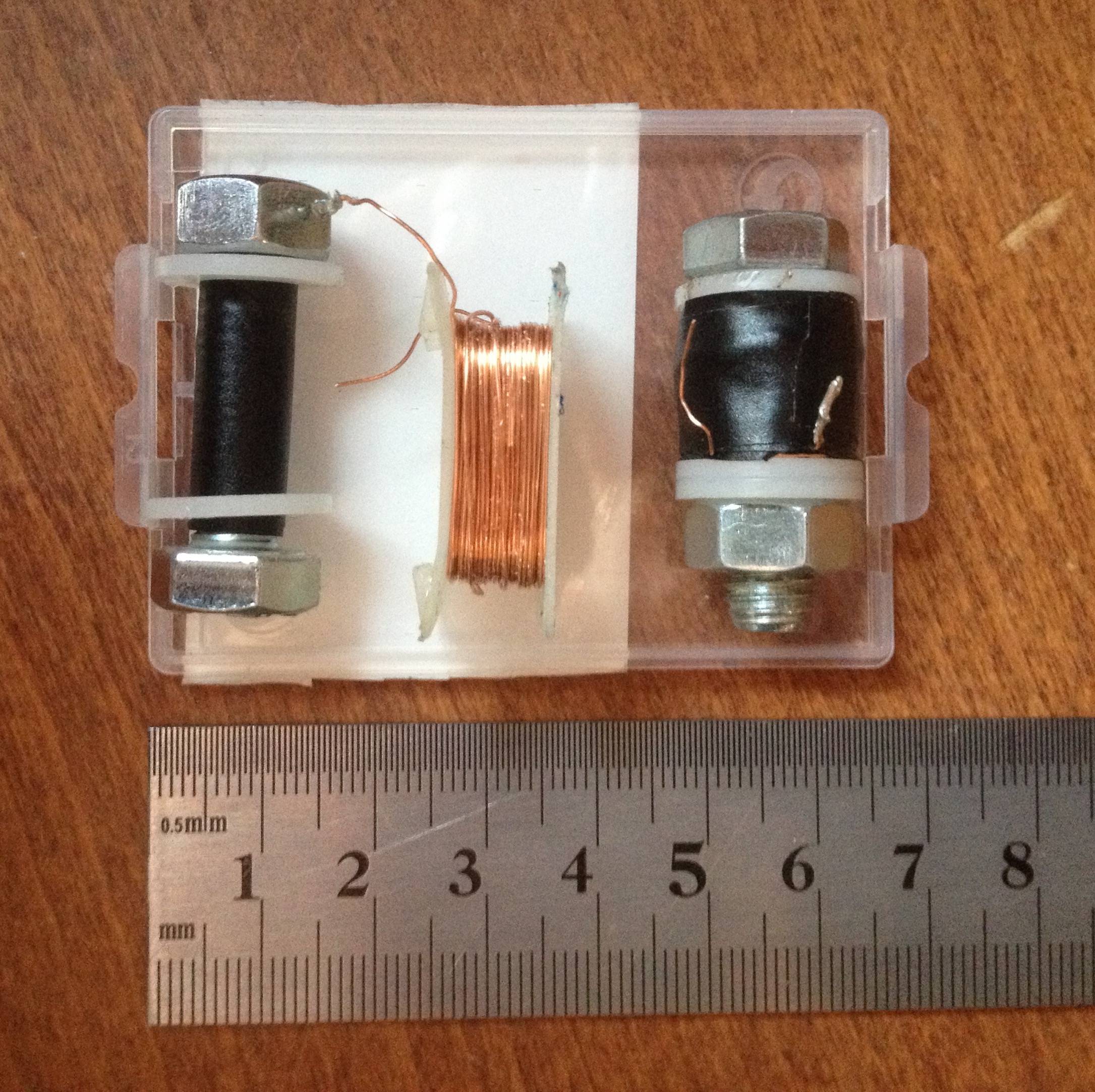 1: Bolt core and washers, no wire. 2: Transformer shell I took the wire from. 3: Wound and insulated electromagnet.

First off, I can’t say why I added insulation tape to the core before wrapping the wire around. Is this something I should stick to or avoid? I’ve thought about getting some small, industrial sewing machine bobbins, but I wouldn’t really know if that is preferable to just using an iron bolt for this project. Size is something of a factor, as the magnetic field of each electroamgnet has to, preferibly, only affect one tine each.

I want to order some cobber wire for the project, but I struggle to choose a gauge, as I’m unsure of what size fits my cores the best, how much current it will actually draw versus how much current the wire can actually handle before heating up too much. It will most likely be run through a mosfet being switched by an Arduino, so I can only assume I will have to supply the electromagnets with an external power supply, since 5v (or however much the Arduino can supply) isn’t nearly enough to get the power I need - I would think. In the project I linked to earlier, he says that he used a darlington transistor array, ULN2803, to power it and ramp it up to send 30v pulses. I would assume that is the way to go, correct?

Is it absolutely crucial that I know the amount of turns on the coil to find out how much current it can handle or is it possible to determine a safe margin through trial and error and rough calculations?

How much heat is expected? What constitutes overheating? When things start to smell and actually burn? Will slight overheating have any significant effect on the magnetic field?

What material is best to wrap around the coil after winding? As mentioned, I just added insulation tape, but I’ve seen other kind of tapes used. Is it for cooling? To ‘glue’ it down and hold it in place?

Get yourself a few 5 volt relays, strip the contacts out and use the moving armature to strike the tine. If you buy a spare one you can disassemble it and count the number of turns. This will demonstrate to you that thousands of turns might be required and that the dc resistance is crucial to avoid over heating.

Is it absolutely crucial that I know the amount of turns on the coil to find out how much current it can handle or is it possible to determine a safe margin through trial and error and rough calculations?

It would not be the number of turns but the length and gauge of the wire.
Yes, there are calculators for the wire gauge, temperature and amperage.

How much heat is expected? What constitutes overheating? When things start to smell and actually burn? Will slight overheating have any significant effect on the magnetic field?

You set the max temperature (25-50°C) then adjust the gauge to the length (turns).

Use a calculator to do that: Wire gauge resistance calculator

What material is best to wrap around the coil after winding?

but I wouldn’t really know if that is preferable to just using an iron bolt for this project. Size is something of a factor, as the magnetic field of each electromagnet has to, preferably, only affect one tine each.

You should use an annealed soft iron like: Soft Iron Rod. Ideal Core for making electromagnets.

The magnetic flux needs to flow through a magnetic conductor. Any air gap in the flux path needs to be minimized. The force is the magnetic field trying to close the gap. The force will increase as the air gap gets smaller. The bolts in the design have a huge air gap because the field has to go the long way around to the bottom of the bolt.

Also, this type of bolt is not a good magnetic conductor. To find better bolts, take a magnet to the hardware store and see which bolts are more strongly attracted by the magnetic field. In my case, the black bolts were better. I think they are iron not steel.

A U-shaped bolt would be better, since you could have a smaller air gap.

At high-frequencies, you will have eddy-current losses that will make everything hot. Higher temperatures are a problem. The coil insulation will fail deep inside the magnet and then the losses will get even higher, there will be more heat, and the magnet will fail at a critical time.

To reduce eddy current losses, switch from iron bolts to ferrite material. Get the ferrite in the correct shape. Ferrite is very difficult to machine or rework. Just about the only process that works is grinding. Ferrite is hard and brittle.

There are different ferrite materials and shapes. You can use half of an ungapped EE core, with a small gap from the E to the tines. Call this an EI configuration, where the E is the core and the I is the tine. For each tine. You need a bobbin for half an EE core. A 3D printed part would be a good way to make a bobbin. If you can't make this, get an EI core, and substitute the tine for the I. EI cores are less common than EE cores.

You can buy ferrite cores from distributors, or maybe get lucky and salvage them from a pile of power supplies in a junkyard.

Instead of putting tape at the bottom of the bobbin, apply it on top of the windings. This keeps the wires from jumping when current is applied. There is also a force on the electromagnet that repels the wires when current flows. This bends the wires a little, and eventually they wear out and break.

Another approach is to make the design similar to a guitar pickup running backwards. Guitar pickups work by magnetizing the steel string with a permanent magnet, and sensing changes in the magnetic gap using a coil with very fine wire. Don't use a real pickup for this, because the wire can't handle much current. There is a product that is designed for guitars to can handle the current. It is called a Sustainiac. My guess is that this is not powerful enough for what you want to do, and you need bigger coils, unless you play very slowly and wait for the notes to build up. The thing to learn from it is that a permanent magnet can also help increase the force in your system.

Overheating is always potentially a problem.

The amount of heat produced depends on

Expanding (b), it doesn't matter whether you have 1000s of turns of fine wire driven from high voltage, or a few turns of thick wire at a low voltage, the heat produced for any given magnetic field will be the same. Use more copper, increase the volume of the winding, and you'll reduce the power input required for any given magnetic field. Once you have sufficient copper, choose the diameter and length conveniently to match your voltage.

You can increase the strength of magnetic B field (the thing that actually does the attracting) you get for any given H field by reducing the amount of air it has to travel through. Replace as much air in the magnetic path as you can with iron or ferrite. Look closely at how a commercial relay is built. Not only does it have an iron core, but it also has an iron return path, and the minimum possible air-gap left for the armature travels through. Generally speaking, if you double the air-gap, you'll halve the B field for any given H field, which means the force drops to 1/4. A small air-gap is all important.

As the B field is inversely proportional to air-gap, once the tine has been attracted, and if it has shortened the air path significantly (for which a return magnetic path is required) then less power is needed to keep it there. You can modify the drive circuit so they pull-in with high current, but stay pulled in with much lower current and thus power.