To power the microcontroller and LED I am using Lithium polymer battery whose specs are 3.7V and 300mAh.

The voltage at full charge is 4.2V and it starts dropping with discharge percentage and drains at around 3.1V. The input voltage at MCU will drop correspondingly and the output voltage at the GPIO will also drop.

Value of Limiting resistor for LED at 4.2V.

When the battery discharge the voltage will drop, then the current going through LED will be less, hence it will get less brighter.

The led will not be visible and will be dull.

How to maintain constant brightness (i.e 20mA) even with drop in voltage?

One Solution is to use LDO which will maintain constant voltage and hence the current will be stable. But as I have very less space in circuit and due BOM cost, I am hesitant to use LDO.

Yes, this is a problem. I have had to deal with it before with blue LED's on single cell lithium battery systems. In my case, I did have a regulated 3.3V available, but I wanted to drive the blue LED directly from VBATT without varying brightness. Anyway, here is how to fix (or improve) it. 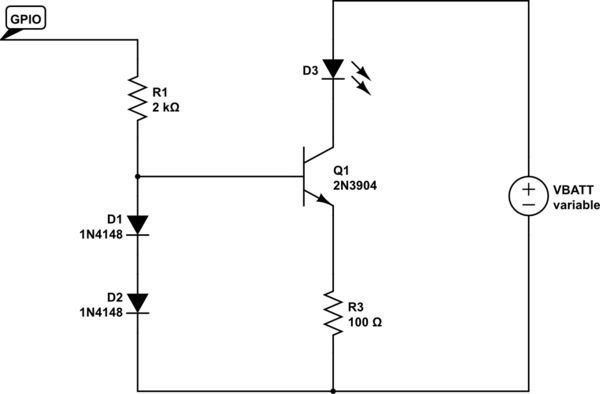 Note that Q1 is not operating as a saturated switch. This is a linear, analog circuit. D1 and D2 could be in a single SOT23 package to save space.

OK. You want a solution which does not use extra active parts. Challenge accepted!... 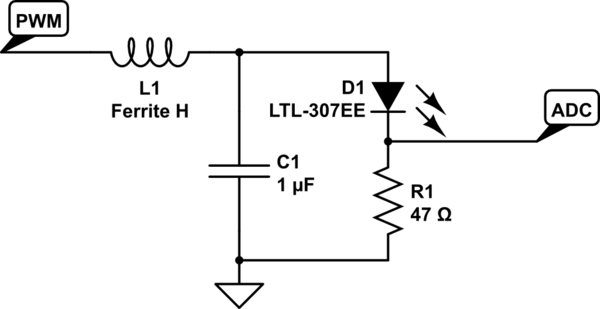 Output a PWM on a microcontroller pin. Your microcontroller has an ADC. Use it to measure voltage on R1 here. Adjust PWM according to ADC reading to ensure constant current, essentially implementing feedback loop in software.

Bonus: intensity can be dimmed.

If L1 has high enough value depending on PWM frequency, you get a crude buck converter, which has higher efficiency than simple resistive drive. In this case reduce R1 value.

As you mentioned, using a regulated voltage source for the LEDs is one way to do it. There are some very small and inexpensive low power LDOs that might work. There are other methods, but probably not much that will take up less space than an LDO. You could use a Zener and resistor to provide regulated voltage, but it won't be as efficient, and still probably won't use much less space than a small LDO. To make that more efficient you could add a transistor to do voltage following, but again the footprint will grow.

I doubt you could do anything smaller or cheaper than using something like this LDO.

If you are doing an RGB LED, then it sounds like you're already feeding the LEDs using a PWM signal. (Quick scan shows this MCU can do 4 channels of PWM?). 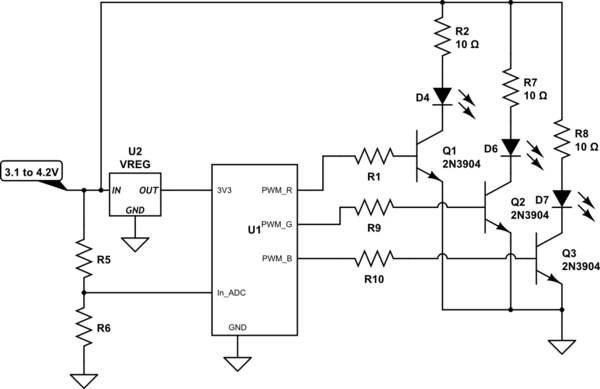 This solution I believe will give you more than 7 hours with a 300mAh battery. Likely a lot more.

The LEDs are rated at 20mA but the max is 50mA. You could probably run the LEDs at 40mA for 7 hours on 300mAh. I do not think even 20mA will be necessary with the Cree LEDs.

The green max forward voltage (Vf) is 4.0v. My experience with Cree is that the forward voltage is usually below typical. You must be aware if you get a green LED with a 4v Vf, it's not going to work when the battery discharges to 4.05v. The datasheet is not that clear. I has a peak max current also. The graphs of Vf shows Vf to be much less at 20mA and you probably can driver it at less than 20mA. I would not worry about it.

The price on an Amber Cree LED at Digikey is:
And Digikey can always be beat.

The LED driver is smaller than one of the LEDs in an SOT-23 case.

The Micrel (Microchip) 30mA MIC2860 is an inexpensive, very small, and simple linear LED driver in a 2.0 x 2.0mm footprint with two outputs. Probably costs about the same as your RGB LED.

The MIC2860 provides the highest possible efficiency by
eliminating switching losses present in traditional charge
pumps or inductive boost circuits. It features a typical
dropout of 52mV at 30.2mA per channel. This allows the
WLEDs to be driven directly from the battery eliminating
switching noise and losses present with the use of boost
circuitry.

Would replace the resistor.

Takes the same real estate as a SOT-23 transistor or diode.

The changes are to replace the RGB with 3 Cree CLM1B LEDs and replace the 56Ω Resistor with the Micrel Driver.

The Cree LEDs are Binned by Flux. That give you some flexibility when buying. Each color has its own bins so you can adjust the luminous flux by the part number.

Each row is a bin code used in two characters of the part number.

Because mcd is a Photometric quantity it is adjust for the human eye. You can get all LEDs with the same range of brightness.
If you buy all colors in the VA bin code the all colors have the same brightness. Red and Amber bins are identical. 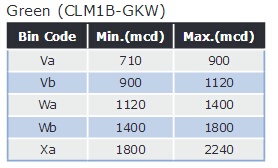 Is there a reason you are using the STS STM8S003 Micro?

I think it is a little over kill and you do not need that many pins.
It is a fine device and the power is not bad.
I'm not up to date on all the processors out there.
I have always like Atmel AVR for apps like this.
The 14 pin ATtiny441 would do this job very well.
It would save real estate. The power savings would be negligible as both micros will average less than 1mA.

I am currently looking into the ATtiny817 which is a new part very similar to the Tiny441. Except the 817 has a DAC. I am going to see how well the DAC can control an LED Driver's analog current adjust and or switching frequency.

I was originally thinking a DAC could help you with the variety of luminous flux on the RGB LED. You could use the DAC to drive the Micrel Driver's current adjust pin with a different level for each color.

End of Update and Recommendations

So the LED must be seen across a well lit room.

There is only one LED turned on at a time.
LED color is controlled by 3 MCU pins connected to the color cathodes, sinking from a single 55Ω Resistor in the common anode path.
Both real estate and cost are major criteria.
Cost of the RGB LED is about $0.20. Battery Discharge Rate is less than 0.2C.

The forward voltage of the LEDs is a huge factor after luminous flux.

The RGB is an economical and space saving way to get multiple colors.

The problem color is blue. Candela is a measurement of light based on the sensitivity of the human eye to each wavelength of colors. 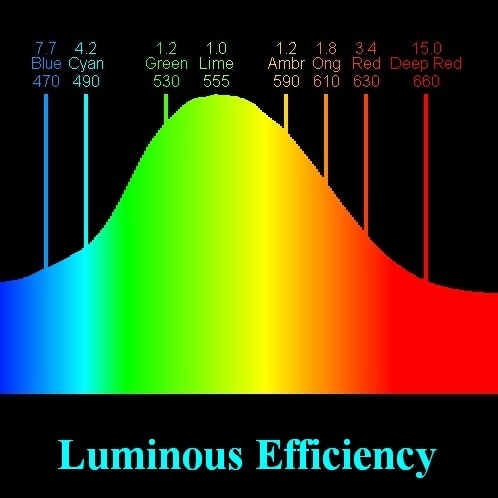 Lime green (555nm) is the color the eye is most sensitive to according to CIE (Commission Internationale d'Eclairage). All other color sensitivities can be specified as a percentage or ratio compared to 555nm Lime Green.

If only two colors are needed then Green and Amber or Red and Amber would be the color combinations of choice.

Red LEDs are AlGaInP/GaAs
Blue LEDs are GaInN
Green is a deep blue GaInN LED pushing a green phosphor
Amber can be either a red or blue LED pushing phosphor.

Single Resistor must be recalculated for Red

Looking like a new RGB will be needed. For sure if blue is required and 235 mcd at full charge is insufficient.

If Red and Green are all that is needed, 82Ω is the only viable resistor. And at that red is being pushed over its max forward current.

I do not know where to go from here mainly because I do not know if blue is needed or if the current RGB LED is actually going to work.

It is likely the cost will increase and the PCB will get bigger.

You need to run the numbers with min and max, not typical. There is nothing typical about LEDs.
Red Forward Voltage range is 1.8v - 2.6v
Green and Blue 2.8v - 3.6v

I was hoping this would lead to a point where I would introduce another solution but things when down hill. The red will not work at 56Ω

Minimum next attempt is separate resistors.

PWM may be necessary. It is possible the micro can blink the LEDs at a fast enough rate. Not a good way to go.

Driving LED with a resistor in a battery powered circuit is seldom a good idea.

But an LED driver may be necessary. The current would need to be adjusted for each color used.

Another solution would be to raise the capacity of the battery and raise the cutoff discharge voltage.

Possibly you may have to use discreet LEDs rather than an RGB.

You should look into using cyan and amber colors. The may be multi-color LEDs other than RGB.

When selecting an LED you must test it in a well lit room and find the minimum mcd that will work. Start with blue.

An LED driver would most likely be the right solution.

Gives you the flexibility to double up two LED with less luminous flux, or just use one output.

well, a few ways of doing it:

2) the first approach but plus an inductor with the led. this is essentially a dc/dc converter;

3) put a (slow) light sensor on the led and pwm the led to maintain a constant output from the light sensor.

Not the answer you're looking for? Browse other questions tagged microcontroller power-supply led resistance or ask your own question.

5
how should i design variable current source of 4-20mA with 24Vdc input?
1
Constant Current Square Wave through LED
2
Help please! I need to give constant current to an LED from a Lipo battery
1
Choose the right resistor for your RGB led (calibrate the colors)
1
How to drive multiple LEDs from a Li-ion battery (with varying voltage)?
8
can leds take varying voltage > listed voltage, with constant current?
4
Safe LED Operating Current
1
What do I need to drive my big LED chip?
0
Understanding constant current/constant voltage charging of LiIon battery
1
Driving RGB LED with Constant Current Driver - Only Blue Working