At t=0 the voltage across the Inductor will immediately jump to battery voltage. Why?

While reading transients i come to read......

So whats happening at t=0 ? zero current and equal and opposite volage ? Since there is zero current then what makes the inductor voltage equal to battery voltage ? If there is current at t=0 then why its never mentioned anywhere in theory or in equation ?

which is defined by the fourth formula here:

Check the differential form. At the very moment of closing the switch, the current is 0, therefore the current density (J) is 0. However, as the electric field arrives to the inductor, a sudden change in electric field induces a very high magnitude rotational magnetic field.

I'll try and provide a more qualitative explanation. But you will have to follow along closely, just the same.

We don't know of the existence yet of magnetic monopoles. But we do know of particles with (-) and (+) electric charges. Placing electric charges at fixed locations (and holding them there, somehow) can yield an electric field with a static electric gradient in space. We use vector calculus (divergence and curl, for example) to make all this quantitative. But the basic idea is simple. If you set up 50 charges at point A in space and 10 charges (opposite, or the same) at point B (not A) in space, then there will be an electric gradient in space along any path you take from A to B.

So if you introduce mobile electric charges into a point in space where an electric field gradient exists then these mobile charges will undergo acceleration and move. (Discounting relativity, which means that if you move your frame of reference relative to the now accelerating charge, you will perceive reality differently -- different subject, though.)

This is, in fact, how currents actually flow in wires. Currents don't just happen on their own. They happen because actual charged particles set themselves up into positions along the surface of a wire so that an electric field gradient exists to cause the acceleration of mobile (conduction band) electrons in the interior of the wire. It's this gradient that causes current to flow, in fact.

I conflated ideas of acceleration and motion above. But unimpeded, electric charges would accelerate without limit to their velocity (excepting the detail that the speed of light will be a limiting perception about it.) What happens when they flow through matter, though, is that they are stopped every so often due to impacts (or, at least, that's a sufficient model to imagine, anyway.) So this means that even though they do accelerate, there is also a mean free path, too, and that they accelerate only for so long and then are stopped when they impact an atom. The details get into concepts of the apparent cross-section of the material atoms (the likelihood of an impact) and a resulting "mobility" and so on. But the upshot is that there will be a net final, average velocity given a certain accelerating electric field gradient.

You probably have already heard that a changing current in one wire will induce an emf in another wire. Transformers depend on this. But a related thing also happens in the originating wire, too. A loop of wire surrounds a region in space. It encloses it. Any attempt to change the current in a wire is equivalent to changing the electric field. This has to happen because in order for the current to change in the wire, charged particles must move around in order to set up a different electric gradient along the wire. As these few particles (and it's only a few) move around so that a higher current can in fact be motivated to flow (and this takes time to achieve), their very motion causes a changing magnetic field, which itself induces what is called a "non-Coulomb" emf (one due to a changing magnetic field and not due to electric charges, directly.)

[I think Çetin Köktürk used the term "displacement field" in lieu of this. But I've always known it instead as "non-Coulomb" to differentiate it from an electric field caused by actual particles carrying an electric charge.]

This non-Coulomb emf acts in a direction exactly opposite to the changing electric field (the Coulomb emf) so that it opposes the change. As a result, there is a sluggishness of sorts in any loop of wire and it is hard to change the current. It takes work to do it. And it also takes time because moving charged particles around on the surface of wires takes time. You cannot instantly move charges around and you need a change in the charge distribution in order to cause a different current to flow (because a different current requires a different electric field gradient.)

By the way, this is where the energy stored in an inductor arrives. Energy (work) must be conserved. So if it takes work to change a current in a loop of wire, then it must be the case that there is energy "stored somewhere" which may be recovered or moved about in some way. This energy is stored in the magnetic field (or, at least, that's how we humans decide to account for it and discuss the idea with each other.)

All of this gets complicated further by ideas of relativity (what Bob perceives in his frame of reference may very well be quite different from what Sally observes from her different frame of reference.) Also, you can actually choose to instead imagine that a magnetic field is, itself, merely an artifact of the limitation of the speed of light on electric charges and the resulting propagation delay as to how their fields can affect other charges at different locations in space. So there are several equivalent formulations that have happened after Maxwell's equations (which preceded the discovery by Einstein of the concepts applied in the special and general theories of relativity.) So Maxwell's equations are merely a classical viewpoint. There are other viewpoints that are equally valid and don't have to suppose the existence of magnetic fields as a separate force. But again, this is a different subject.

Quantum mechanics adds it's own complications. The Meissner Effect is, for example, completely unable to be explained through the use of Maxwell's equations and/or relativistic alternative explanations. None of them work to explain the Meissner Effect. To do that, you need quantum mechanics and the incredible insights developed by the Bardeen-Cooper-Schrieffer (BCS) theory that was published in 1957.

Reality is fun, in short. And the moment you think you understand one thing about it, someone will discover something else about it that you can't yet explain. For the most part, though, if you intend on being an engineer who makes things work in practice and isn't at the leading edge of physical research, then there are a host of simplifications that work (most of them due to the power of statistics when applied to large numbers.) For example, temperature and entropy do NOT exist at the atomic particle level. But they do exist (although Boltzmann's paper is seminal, I personally think that Shannon's papers are better to read on this topic) at the macro-scale level. They emerge as properties only as a result of large population statistics. A lot of things are like that.

You are asking good questions, though. Please continue to do that. And don't take what I said here as gospel any more than you should take what anyone else says. Think for yourself. If you feel something doesn't make sense, or is wrong, then perhaps you are right and you should challenge what you've read. There is no such thing as an authority in physics. Only ideas. Some survive for a while. Some do not. But reality is never entirely what any one person thinks about it. No one is that good. Feynman makes mistakes in his "lectures" series and I remember someone writing him about it and that they got a bad mark because they believed his writing. Feynman's response was that, yes he got it wrong, but that the student should have been graded down regardless because each of us are supposed to think about things for ourselves and not take the words of anyone else as true or real. And I agree with that.

The current in an inductor can not instantly change.

So before switch is closed, current in inductor is 0.

At t=0, switch is closed. By Faraday's Law a voltage is induced. By Lenz's Law, the voltage will oppose the source. So the current in the inductor can not go to it's final value as determined by Ohm's Law. The magnitude of this induced voltage has to be battery voltage or \$ i \ne 0\$. \$V_L = V_b\$

If i = 0 at t=0, the inductor is effectively acting as an open circuit.

Put switch to C. Current should go to 0, but the magnetic field in the inductor collapses. By Faraday's and Lenz's Law, a voltage is induced, which tries to keep the current from changing. The only way this occurs is if induced voltage is equal to battery voltage. The inductor acts as source. 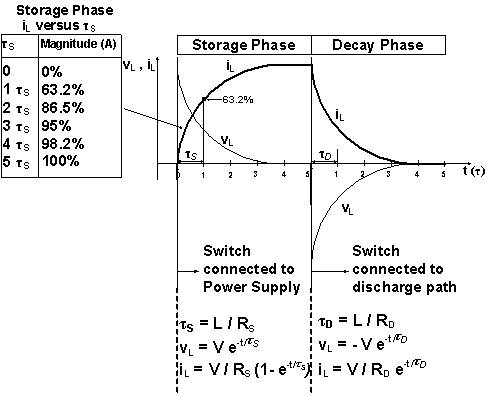 Not the answer you're looking for? Browse other questions tagged inductor electromagnetism transient or ask your own question.

0
How does an inductor generate back emf equal to a source driving it?
4
Transient Current in an LC circuit with a DC supply
0
Confusion with flux and Lenz's law in an LC tank circuit
0
Lenz Law and Magnetic fields in an Inductor
2
If induced voltage (back-emf) is equal and opposite to applied voltage, what drives the current?
0
Back EMF in an inductor with an AC supply
1
If the self-induced EMF in an inductor is 180° out of phase with source voltage, shouldn't they cancel out and net voltage should become zero?
2
Inductor with AC source
0
Ideal voltage source connected with ideal Inductor