A while ago I had some trouble with a TPS73633 (see Troubleshooting handsoldered TPS73633 SOT-23 LDO whose output is unexpectedly high) . I didn't get the 3.3v output voltage that I was expecting, whatever I tried. Since I wan't sure whether the error was in my board design or somewhere else, and I wanted to get to the bottom of it, I designed a new board specifically for testing the TPS73633.

it follows the "typical application circuit" design in the datasheet (http://www.ti.com/lit/ds/symlink/tps73633-ep.pdf). The board design looks like this:

Unfortunately, I do not get 3.3v out of it when I hook it up to one of these batteries: 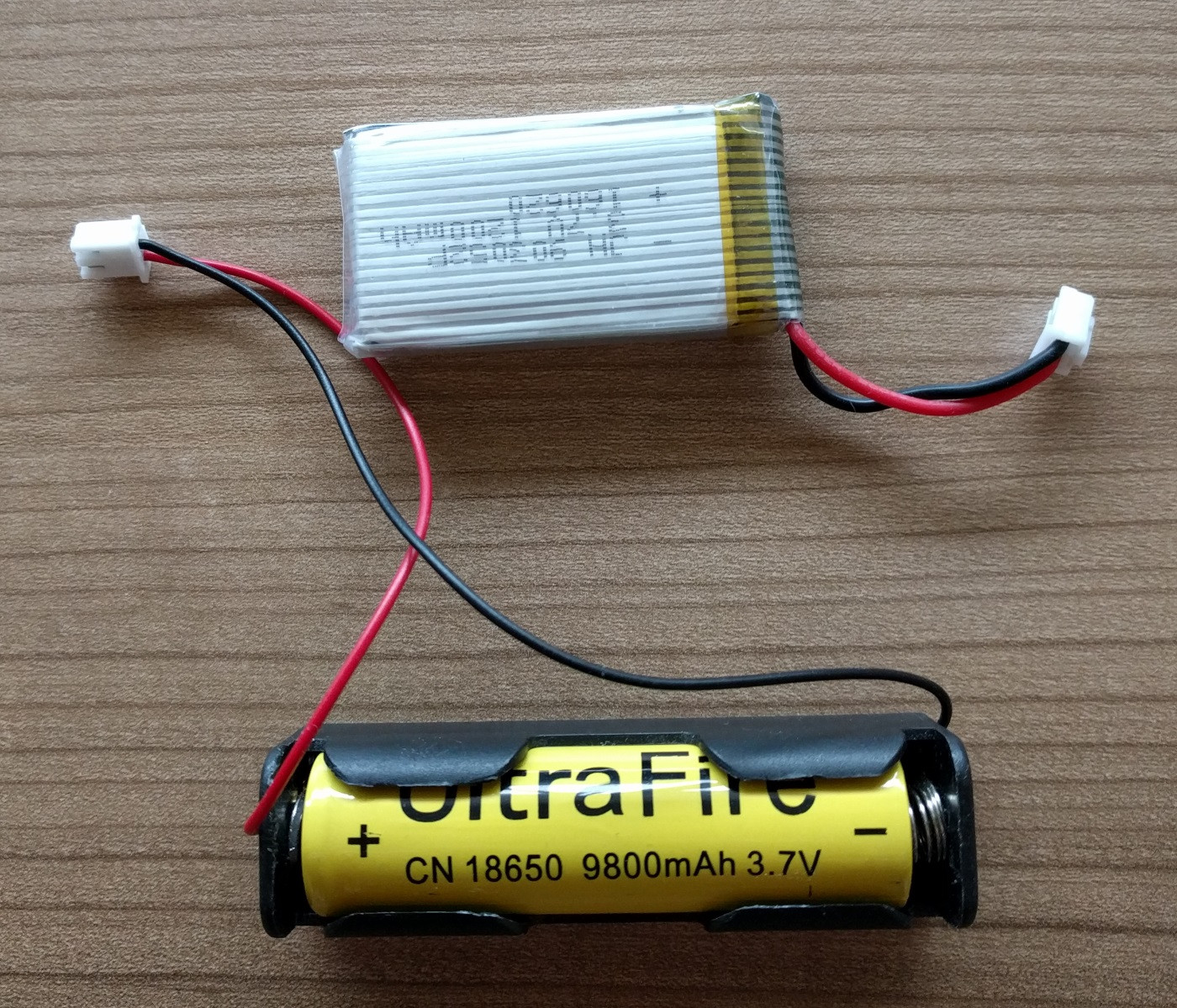 At first I thought the problem was that I bought these ldo's cheaply in China, so I bought another batch to see if it woukld make any difference, and then I aven bought some from farnell, so I would be sure I had the real deal, but whatever I tried, I never got a output voltage of 3.3v. What I did get was 2v, 4v and 0.2v: 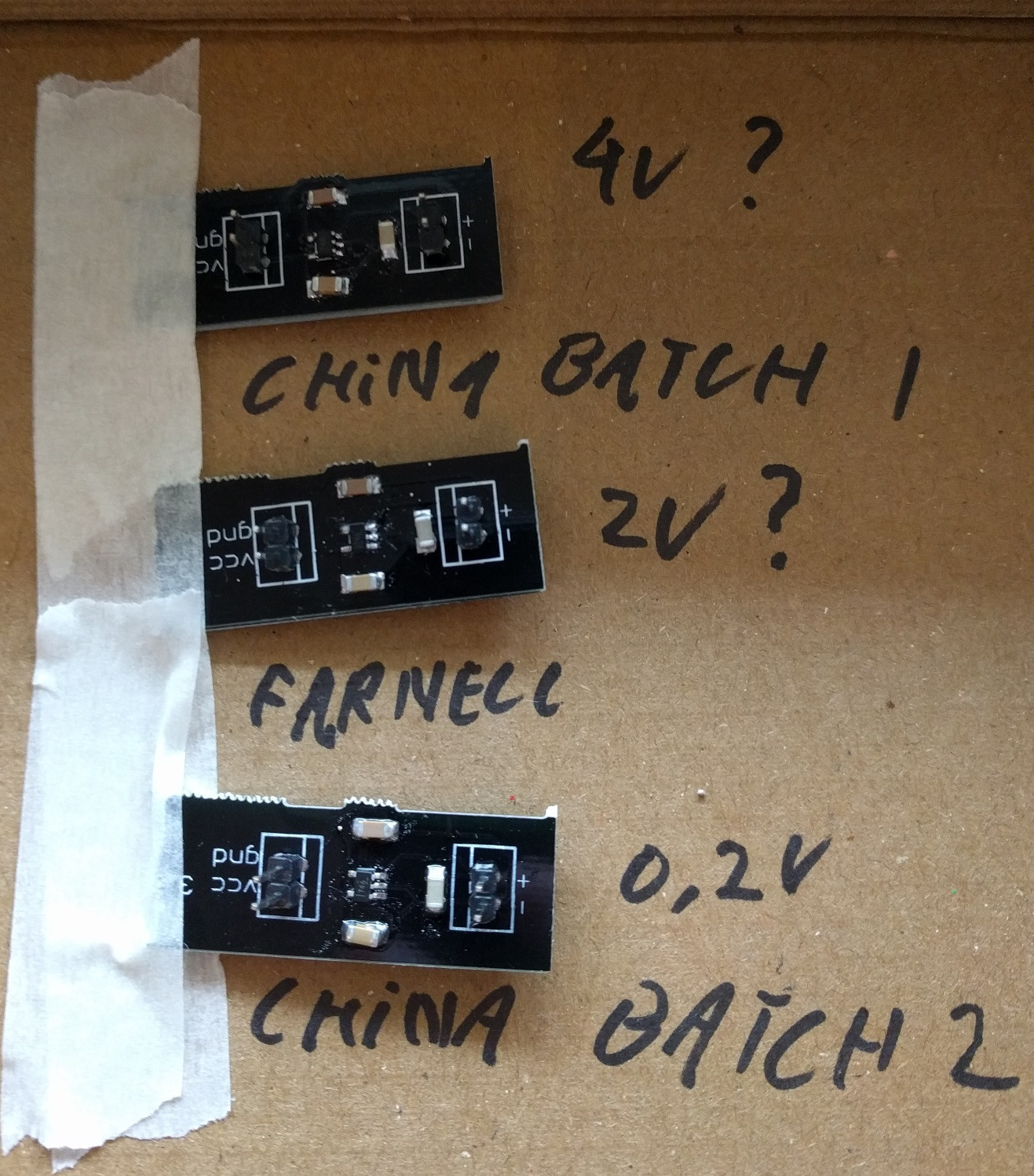 I even bought a few TPS73733DCQ ldo's, wich are basically the same thing in a SOT-223-6 package, but even those gave me 0.2v as output. So after all this testing I'm a bit lost at why I don't get a simple LDO to do what it should do.

I did all my tests while a load was attached ans with fully charged batteries. I also measured all connections and it doesn't seem like the problem is in my soldering skills.

The only other thing I could think of is that I either soldered at a too high temperature (300 c) or that there's something wrong with these batteries.

Does anyone have a clue what I'm doing wrong here?

As suggested by peufeu I removed all capacitors. That actually did the trick for most of the ldo's, i finally got 3.3v out of it (except for the Chinese ones from the first batch, I expect them to be counterfeits, they just give a output voltage that is the same as the input voltage).

After that discovery, I started adding capacitors again, since the datasheet suggest doing so, in this diagram: 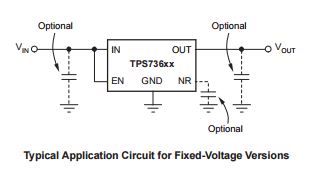 In my original design I was using capacitors of 1uf, 0.22uf and 0.01uf. To be honest, I don't remember why I chose those values.

In the datasheet I only found this information:

Although an input capacitor is not required for stability, it is good analog design practice to connect a 0.1-µF to 1-µF low ESR capacitor across the input

it doesn't say anything about the value of the other 2 optional capacitors. I tried using a 1uf capacitor for all three capacitors, and that seems to work fine. Is there some standard rule as to what values you would use in a case like this?

post a schematic of your board would be helpful.

I would try a few things:

1) make sure that the layout matches the schematic;

2) make sure that the chip is real;

3) make sure that the battery provides the right voltage output when connected to the board;

4) make sure that the battery is correctly connected to the board;

5) make sure that your meters are accurate;

6) make sure that the chip is soldered on correctly;

7) put a small load to the ldo output;

basically, make as few assumptions as you can and start with the things that you are the most sure about.

Not the answer you're looking for? Browse other questions tagged power ldo or ask your own question.