What is the ratio of antenna length to power?

A question that came up in class; what is the relationship between length of a solid cylindrical antenna (wire) and transmission power? I would imagine it's frequency dependent

Any length antenna can radiate any amount of power at any frequency, within the limitation of the current being so large as to melt the wire. I think this is a theoretical argument, so let's assume perfect wire, which has no resistance, which can therefore handle infinite current.

To radiate a particular power, you have to drive the antenna with a large enough signal so that the power into the resistive part of the antenna's impedance is the power you want to radiate.

That was the theoretical argument. However in practise the real part of the impedance is very small and is swamped by the imaginary part unless the antenna length is either "long" (relative to the wavelength) or a odd multiple of 1/2 the wavelength. At odd multiples of 1/2 wavelength for a dipole (a center-fed length of wire with a cut between the two feed points), the reactance (the complex part of the impedance) crosses over between capacitive and inductive and happens to be zero. This means the antenna looks like a pure resistor at that frequency. This makes it much easier to use the antenna to radiate significant power. When the antenna impedance is largely reactive with small resistive component, the voltage required to achive the power you want can be very large. Any transmitter trying to produce that voltage must also deal with most of the power it is putting out coming back (must be able to drive a highly inductive or capacitive load). This means the currents are high, which causes loss in the transmission line between the transmitter and the antenna. It is for these reasons that one choses antennas of specific size for specific frequencies, not because radiating otherwise is impossible. It's perfectly possible, just not practical.

There is a trick that can be used to make antennas with large reactive components appear resistive to a transmitter. This is by placing inductors and/or capacitors in series and in parallel with the antenna. If done just right, these reactive impedances add to the antenna's impedance to cancel out the reactive components, leaving only the resistive. Another way of looking at the same thing is that the extra reactance together with the antennas existing reactance form a resonant tank circuit at the frequency of interest. This tank circuit produces the large voltages and currents needed to drive the antenna so that the transmitter only needs to produce the minimum to drive the resistive portion. For more information on this, look up something called a Smith chart. That is a graphical means to determine the additional reactive components to add to make the whole network look resistive at a particular resistance.

In practise, even this strategy is limited. That is because the antenna itself still requires the high voltages and currents to radiate power at a inconvenient frequency. Real capacitors, inductors, and even wires have limits and real losses, so this strategy can only be take so far in practise.

I don't know what do you mean with solid cylindrical antenna, but the most similar thing that comes to me is the half dipole with reflective plane, also called Marconi antenna.

Another consideration before starting: the diameter of the cylinder doesn't help the radiation, it's only for conductivity and mechanical purposes.

When building an antenna like that, there are two important factors to consider: the directivity and the impedance. The first means how you can concentrate the radiation, the second is how efficiently you can transfer power to the antenna (only active power is radiated in the far field).

So, the antenna impedance for a dipole (similar for the half dipole) is like this: 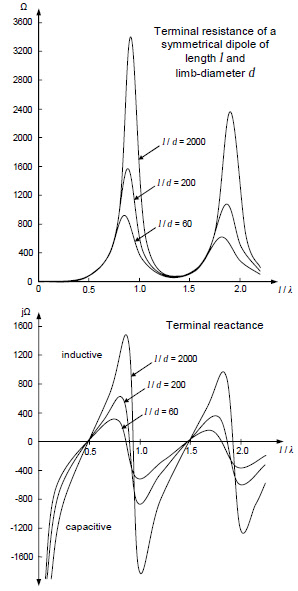 As you can see, it has a sort of periodic behavior, so you should work with multiples of \$ (2N-1) \lambda/4\$, otherwise you have infinite imput impedance and bye bye power.

About radiation, the situation is not so much better: the radiation diagram for the dipole of changing length/wavelength is this:

As you can see, there isn't a real benefit in pushing more than \$ \frac {2}{3} \lambda \$, considering again that for L=lambda the impedance is infinite.

Where you can gain from length is using broadside arrays: these are used in radio broadcasting, and are a series of antennas placed in the same vertical line and feeded with a certain reciprocal phase. You have an omnidirectional radiation in the xy plane, and very directional on every z plane.

BTW, generally, when you use a long antenna is because you operate at low frequencies, not because it radiates better. The size is useful with arrays, mostly.

Not the answer you're looking for? Browse other questions tagged wireless antenna or ask your own question.

3
Detached antenna and connecting wire length
10
Why can a feedline be cut randomly when the antenna needs a specific length?
1
Wirelessly power multiple LEDs with antenna?
17
433MHz quarter-wave length antenna: longer is better?
0
Does length of wire to NFC antenna affect ability to read tags?
0
Question about the length of antenna
0
How does the range of bluetooth increases by adding an antenna?
1
Why are two different length antenna sold with this 433MHz module?
0
Partially Collapse Telescoping Antenna to Change Effective Length
1
How can this 160MHz VHF locator tag work with such small antenna?