I'm very newbie in electronics, so, I kindly asking the community to review my schematic. This is my most advanced project I ever did and I'm really unsure about particular points in my scheme and about overall design.

What I'm doing is a multi-channel DC-motor controller with external powering. The motors will be small 5v or so DC motors with current draw about few hundreds mA. 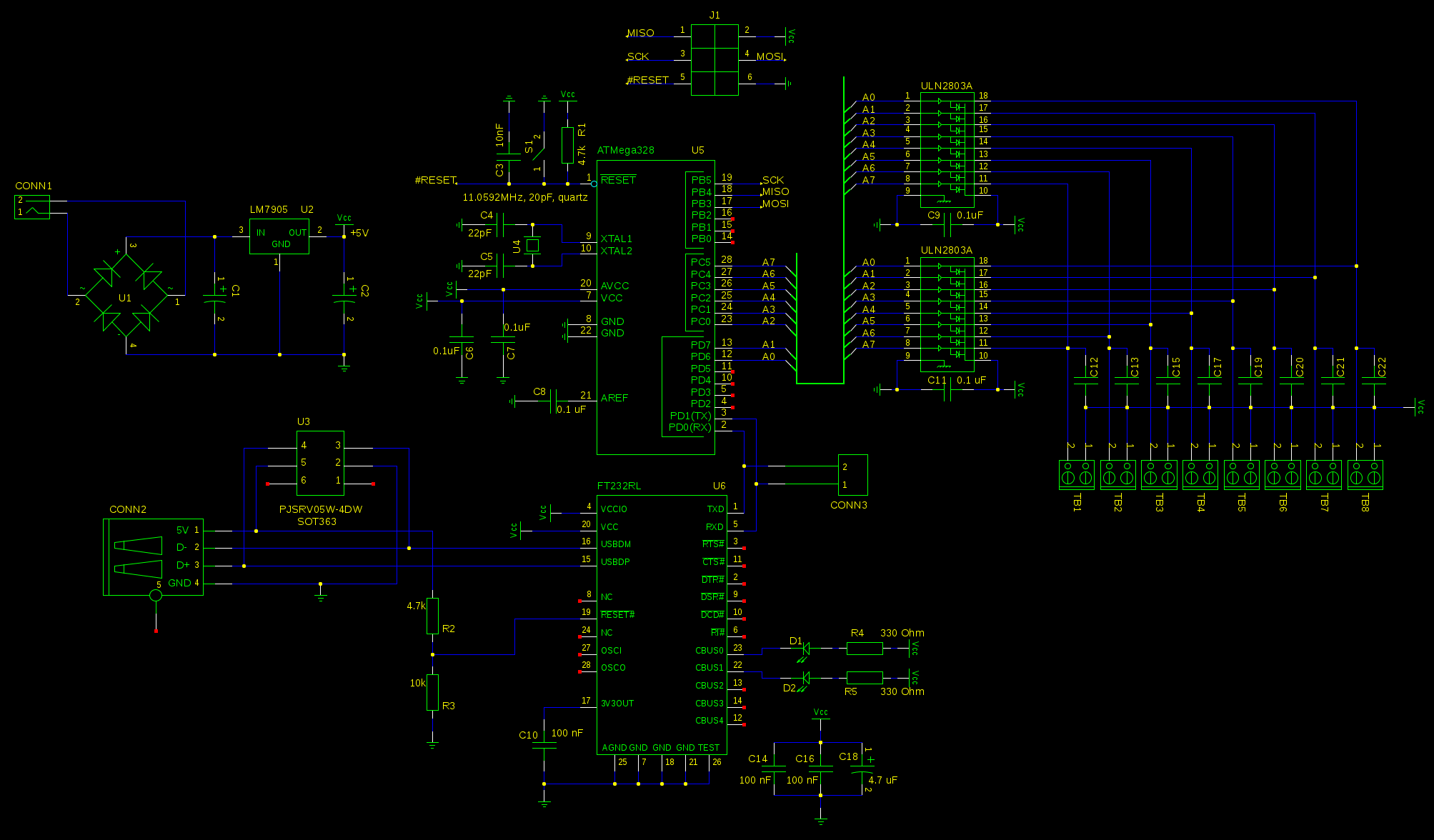 Here what about I'm unsure:

Is it correct to connect ULN2803 in parallel to achieve more max current per channel?

However yo have another problem: ULN2803 has high VCEsat, so your 5V motor will only receive 3V or so (i.e. it will work... but only marginally).

I would use several dual MOSFETs in SO8 packages. These cost 50 cents each, they're small and easy to drive, but you'll have to add the diodes.

Is it enough to just put capacitor in parallel to each motor to perform low-pass filtering?

No. Cap will filter HF noise a little... Motor inductance is enough to smooth your PWM.

It is useless, just plug connector the right way!

Also, don't power your motors from regulated DC. Power them from input voltage... Poor 7805 is gonna get in trouble when all motors are on.

How to make over-current protection?

You already have it, since 7805 will overheat and shut down if one motor stalls.

This would usually be done with a small current shunt in series with each motor, and sampling it with your micro's ADC.

Personally: drop the expensive FTDI FT chip, just use a microcontroller with USB functionality integrated; these usually come cheaper than ATMega 328. Drive the microcontroller off USB, and try make the energy transferred between the supply that powers the motors and the USB voltage as small as possible.

As said, an array of cheap MOSFETs will do much better here. ULN280X wasn't meant to be put in parallel.

Maybe I should put RC-filter between MCU and input of Darlington pair?

Usually: no. If anything, you'd want your transistors to switch as hard as possible – if they're "half" switched on, they have large resistance, and will get quite warm. IF you need to filter (ie. if your motors don't "flatten" your PWM enough), then do it LC-filtered after the driver transistors.

There's legitimate reasons to actually not fully switch on and off the transistors, but to operate them at a low-passed resistance range – but then, make sure you buy heat sinks large enough to get rid of the energy not spent in the motors but the transistors.

not very lame, but pretty useless - it's hard to plug in a barrel connector the wrong way, and the very most barrel connectors have + on the center, - on the outer conductor. Whoever plugs in a barrel connector of a supply that doesn't follow that convention is to say the least a bit careless. It might still make sense to protect your circuitry from that mistake – but a single, low forward-voltage diode or a MOSFET in a proper configuration for that job might do that too, without burning 2x diode forward voltage just so that you can hypothetically plug in even strange 5V power supplies.

How to make over-current protection? Do I even need to do it?

Depends on who or what you need to protect. I'm sure you can even buy motor driver ICs that would obsolete your whole system (not looking for them for you, however) that include something like a per-channel current limit.

If you want to do it yourself: add low-side shunt resistors (couple hundred mΩ, typically), and use the voltage across these to turn of the MOSFET in the individual channel if the current gets too high (i.e. when the voltage over the shunt gets too high). Might need additional analog electronics.

Alternatively, use your MOSFETs on the low side of your motors, and monitor the voltage across the MOSFETs – it should either be (nearly) Vcc (MOSFET off), or very low (MOSFET solidly, no overcurrent). If the voltage across the MOSFET rises, turn it off. Might lead to much simpler analog electronics, since might, depending on availability of suitable MOSFET types, basically just be a resistor from gate to motor side of MOSFET. Simulate with e.g. LTSpice.

You have a LM7905 shown in your schematic - that is a negative voltage regulator.

Note that the pinout is different from a LM7805.

You haven't shown what value C1 is - do you expect to use the circuit with AC input? If so you will need a large value capacitor - probably 1000's of microfarads.

How much current will the motors need - there may be significant power dissipation in the bridge rectifier (U1) - do you need AC input or reverse polarity protection?

Unless you want to do a some USB software I would recommend going with the FTDI approach rather than performing that function in the micro.

Not the answer you're looking for? Browse other questions tagged microcontroller usb pwm dc-motor atmega328p or ask your own question.

10
Why are these USB data lines conned to pull-up resistors?
0
PIC resets when motors work
0
How do you control 130-size DC motors with an Arduino (seemingly 20A DC motors)?
0
How Much Power do I need to give to these Servos?
2
How to calculate current limiter resistors for ULN2803 and Relay?
3
Using LED driver as PWM digital outputs
0
VBUS Pin of USB-C type connector in UFP application
5
How to use motor drivers with H-bridge and PWM input, to control direction and speed of DC motors?