Serial.begin on ESP8266 not working

I am trying to use the Arduino IDE to program an ESP8266 (ESP-12F). I am able to upload a simple program that blinks the built-in led. As soon as I put a reference to Serial.begin() anywhere in the code, my program no longer works. Even code that executes before the call to Serial.begin() fails to run.

I am using the following code:

I am connecting the ESP as follows. It is probably not very relevant since I am able to upload and run code successfully as long as it does not attempt to use the serial port. I have also tried replacing the connection to RTS and DTR with push buttons to GND, and the result is the same.

PS: I know that Serial.begin() should not go inside the loop(). I've only moved it there so that it happens after turning the led on.

I tried to flash the latest firmware using the official tool, but this process always fails with an "Invalid head of packet" error. It seems to occur when writing the last packet, because if I flash a large file, it gives the error only at 99%.

After these attempts, I have been unable to make any program work. Even the simple led blinker without any Serial reference seems to do nothing, although the serial monitor shows the ESP boot messages.

There are two options left for you to try based on all the information contained on this thread.

1. Fix the connections as follows:

You need to connect a few GPIO pins on the ESP-12 to 3.3V or Ground, to set it in the right mode for communicating with it. You can add capacitors and resistors where you feel they may be needed, however the AI modules have those internally already. In addition, remember to remove this setup when resetting the board to run your firmware, otherwise it will be booted into "Programming/Flashing Mode" which can have undesirable effects. Please note that this diagram uses a LM1117 voltage regulator, if you have a 3.3v power supply you can just substitute that in the diagram. Here are the connections you need to make: 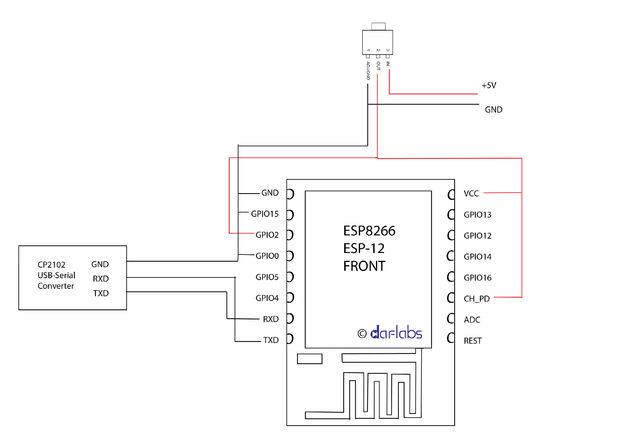 REST ----> RST (only if you plan on using the serial console to reset the board.)

GPIO0 ----> HIGH or Floating for AT Mode (3.3V) [ * if you want to flash completely different firmware then you must connect it to ground ] It appears you have this connected to HIGH which is why you may be having problems flashing Arduino Sketches.

2. Reflash the AT firmware using ESPTOOL

If you are still having problems after the reconfiguration of your connections, I highly recommend that you reflash the AT firmware from Espressif and start from scratch. If this doesn't fix your problem then I am afraid you have fried your board.

Use serial.begin before pinmode: https://cdn.arduino.cc/reference/en/language/functions/main/loop/ in setup.

I am tempted to think that your chip is defective.

When a program is compiled with the Arduino SDK it is really just like any other program written in C++ with a customized main() function:

It is completely irrelevant whether any particular block of code goes inside setup() or loop() apart from the fact that setup code runs once and loop code is run in an infinite loop.

It is also irrelevant whether you call pinMode() before or after Serial.begin() either ought to work. I have a sketch running currently that sets pinModes first then sets up the Serial communications. It is running on a NodeMCU though, so it is different hardware, but the particular hardware shouldn't matter.

My advice would be:

My answer is based on past experience with USB to TTL converter for arduino , i burned several chips , before realizing that the TX and RX are inverted . what that means is that the USB to TTL RX is not the pins it uses to receive data , it is the pin that should be connected to the micro-controller RX pin .

So what i do these days is that i always use 330 to 1k resistor in series with TX and RX lines , to prevent damage if connected the wrong way.

As for your problem , you cannot tell for sure , unless you start off with new working parts. because your chip might be damaged. Using Serial.begin initialize the port to serial mode and the pins to Input and output , thats why after this initialize if the connection is wrong , the port starts to SINK or Source more current than it should be ....

Not the answer you're looking for? Browse other questions tagged serial esp8266 or ask your own question.

0
Is it possible to program ESP8266 from another microcontroller?
0
Problem Flashing ESP8266-01
1
ESP8266 module emits random/garbage characters on external supply (but works on arduino's 5v & 3.3v)
1
ESP8266 not running uploaded Arduino sketch
0
I'm getting an error while uploading my code to an ESP8266 via an Arduino
0
CH340G and ESP8266-12e. Doesn't work together
0
Reverse Engineering RS-485 Signals - Floating Issue
1
IssuesFlashing AT Firmware to ESP8266 chip built onto Arduino Mega board