How to calculate output resistance in collector circuit? 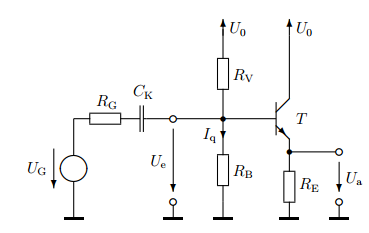 Here is the solution: 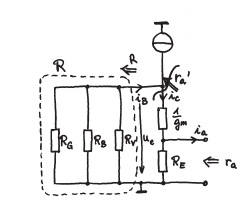 Now we need to calculate \$r_a'\$. In small signal analysis the DC sources are turned off so \$U_0 = U_G = 0\$, and this means that \$R_G\$, \$R_B\$, and \$R_V\$ end up in parallel with each other. The parallel combination of these three resistors is shown in the solution in the dotted box with the value \$R\$. \$r_a'\$ is the parallel combination of these resistors but divided by a factor of approximately \$\beta\$, the small signal current gain (since the current through the three resistors is \$i_b\$ but we were calculating the resistance looking into the emitter). Therefore $$ r_a'= \frac{R_G || R_B || R_V}{\beta}$$

4
Required Emitter Resistance \$R_E\$ for the Maximum Emitter Current for a BJT
4
Av for small signal analysis with BJT for unbypassed emitter and ro in place
8
Stability factors of a voltage divider bias circuit
3
Relationship between base-emitter voltage, base current and collector current
0
How can I calculate the input resistance of this BJT Differential Amplifier circuit
5
How to derive the precise gain of an NPN common emitter amplifier without emitter degeneration?
0
Finding current through an LED in an amplifier using a BJT
0
Apparent contradiction in AC analysis of BJT amplifier
1
Frequency response of BJT frequencies with CE bypassed