I am interested in creating an inductor with a large inductance/large mag field in core. However, when empirically measuring the inductance of the wound core, I calculated a relative permeability ~1000x less than expected (2-6 vs 2000). My question is whether this is due to an error in my setup/calculations/understanding, or due to receiving a core not up to spec. 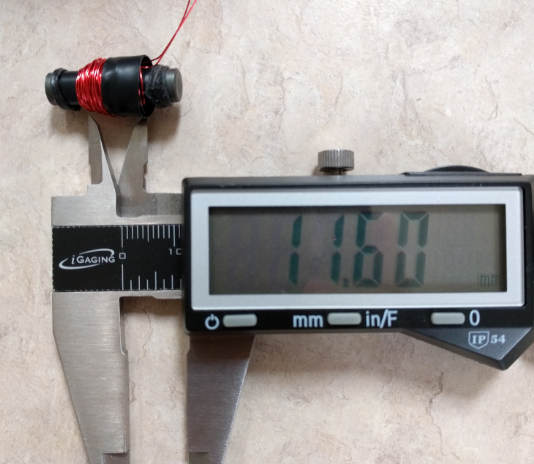 The inductance of the coil was measured experimentally by creating an RL series circuit fed by a signal generator, and increasing the frequency until the Vpp across the RL circuit was twice the Vpp across the resistor alone. See http://www.daycounter.com/Articles/How-To-Measure-Inductance.phtml for an explanation of this method. 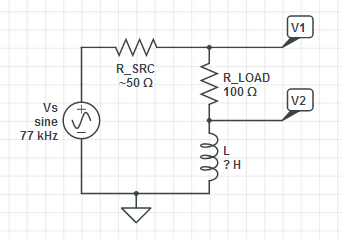 For a 100 ohm 1% tolerance resistor, the required frequency was 77kHz, resulting in a measured inductance of 358uH. I used the following equations to calculate relative permeability \$\mu_r\$. The geometry is neither a loop or solenoid, but the equations only differ by a factor of 2-3x in this case.

Because there is at least 150 ohm in serial with the 2Vpp source, the most current that could flow in one direction is 1/150 = 6.7mA. Assuming the relative permeability is 2000 as stated, there shouldn't be any concern of saturation, as the magnetic field in the center of the loop/coil is at most .28T (\$B_{loop,center}\$ with R=3mm). (Also, the scoped sine waves were clean.)

Browse other questions tagged inductor coil or ask your own question.

2
Generating a magnetic field with an electromagnet

3
Estimating Inductance
5
Winding my own inductor-resistance
2
Ferrite core inductor for antenna
1
How much is the permeability of this attached inductor core?
9
Ferrite vs. iron powder toroid for buck converters?
2
Using PCB coil for proximity sensing
0
Inductor coils, core, and a gap between
1
Permeability Discrepancy of an Inductor