With the parts in the mail, haven't had the time to test, but the simple question: will this work, or what improvements are needed?

What it's supposed to do: a MOSFET switch for 12V, 0.5-3A loads, driven by a 3.3V logic level (which turned out to be too low even for my logic level MOSFETs). The chip starts up with the ports high, MOSFET off. Setting the pin low switches it on. 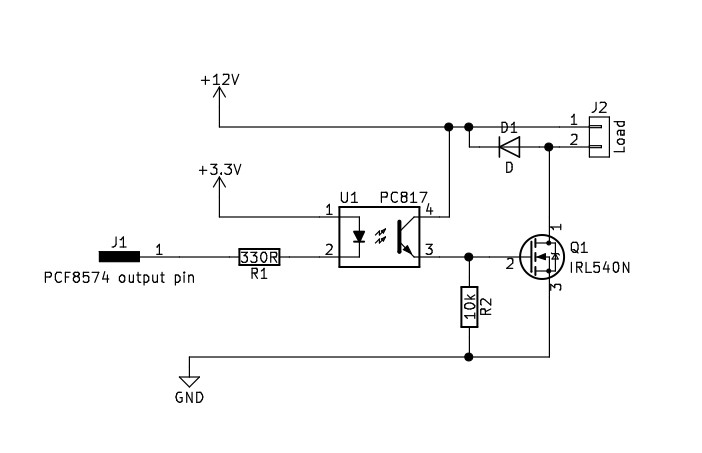 I'm using a 3.3V logic level NodeMCU board for my project. For this I got myself a handful of IRL540N MOSFETs (after reading forums, and the things are cheap). From the spec sheet I had the idea it would work at 3.3V but no luck there. At 5-6V gate level it opens up fine (I hooked up 21W worth of 12V LEDs to test, worked like a charm, the IRL540N didn't even get warm). But at 3.3V no luck, the LEDs barely lit up.

Using a driver transistor worked, but then it became inverted: port low was the on, so effectively default on, and that's not safe for my project. It has to be default off, so at startup (pins low) it's simply off.

So then I realised I had to use higher voltage, and this is where the optocoupler comes in play. It allows me to pull the gate of the MOSFET to the 12V level using just 3.3V.

The below schematic I devised for the combination with a PCF8574 port expander. Its pins should default to output, high. In high state it can source only 0.3 mA or so, very little, enough to drive a transistor but not an LED. It however can sink at least 20 mA, so that's good enough to drive an LED, or an optocoupler.

The idea behind this schematic: when switched on, the ports are high, no current through the LED, MOSFET gate pulled low, and it's off.

Then when I make the port low, it sinks the current for the LED in the optocoupler, the gate is pulled high, and the MOSFET switches on. The 12V ensures it's saturated.

Load may be lamps or a motor or even a solenoid, D1 is there to prevent the circuit from frying upon turning off.

Everything seems to be OK, Just some comments: 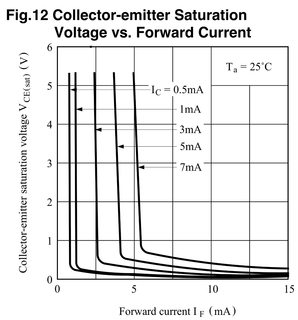 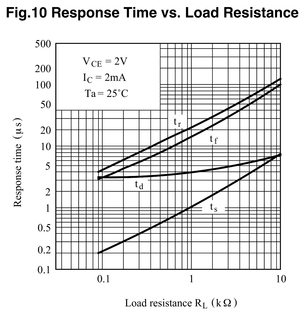 Source of the figures: PC817 datasheet.

There is nothing logically wrong with your schematic, but there are a couple of points you need to think about.

Your biggest potential problem is that the opto-coupler acts like a constant current source. As you turn it on it will always be current limited by the gate capacitance charging. In addition the Opto has to provide current through the 10k resistor, which to hold your device on (VGS > 2.5 V @10 A) requires 0.25 mA. To get your Gate to somewhere near 10 volts this load current increases to around 1 mA.

You have approximately 6 mA through the LED on your PC817, therefore likely 3 mA current limit on the output (worst case). The IRL540N will have approximately 2000 pF of input capacitance. This will result in a slow turn on/off of the FET (I'd expect worst case in the range of 1 - 5 uS).
You will also have very large turn off delays ( >15 uS) if the Gate voltage does get up to 10 V or above. The turn off time is soft too since it's defined by the 10 k * 2000 pF discharge rate.
Neither the turn on/off or delay times may be a problem at your envisaged output current levels, you just need to be aware of the issues particularly if you are ever intending to use PWM control (eg PCA9685).

Not the answer you're looking for? Browse other questions tagged arduino opto-isolator mosfet-driver esp8266 or ask your own question.

4
DC motor and smoked arduino
1
What is optocoupler and how it is used?

2
Optocoupler design
0
Will this Optocoupler and MOSFET be able to deliver 5V +2A?
0
PIR motion sensor with MOSFET, optocoupler or Relay to turn on LED ribbon
4
Do I need a heatsink for a MOSFET
0
Electrical Switch for LED’s (Providing enough MOSFET gate voltage)
2
Drive IRFZ44N Mosfet with 2N2222 NPN Transistor from ESP8266
3
Why doesn't this MOSFET driver work when load supply is isolated?
14
High side mosfet 12V switch from isolated 3V3 GPIO