Is this a feasable method for using 12VDC LEDs as power indicators?

I've been looking for the answer, but everything I've found is assuming the LED is of a lesser voltage, or a fixed voltage. More than anything, I'm trying to determine if the concept below is feasible before I begin blowing the poor little guys up.

I'm building a control panel for a railroad layout. Below is a brief example of what I'm putting together. My apologies for the poor schematic. For reference, the screw terminals represent the power input and relay output (sans the center, unused terminal) on a Vellman Mk111. Please note that the label "To ?V Lighing" is 12VDC (haven't changed that yet). 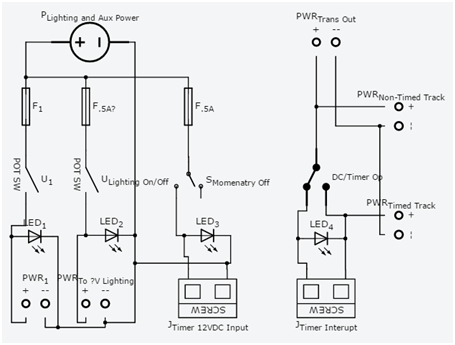 Starting from the left, the first and second are for two separate 12VDC lighting connections. The extra to their right is representative of four Vellman MK111 Timers (to save space, only one is shown). The SPDT switch shown there represents a NC momentary switch that will be added to each of these timers. There will be one LED there to show power to those circuits. The power supply is 12VDC, 1A. Each Timer is rated at 100ma.

The separate diagram on the far right begins at the output of a MRC Railpower 1300, which has a variable output between 0-15VDC, up to 7A. The datasheet I found does not specify if the 7A is supplied to the DC output, the A/C output (which I will not be using) or a combination of both. Having tested each locomotive running with a voltmeter (to log the voltage needed to run at scale speeds), they will be running between 9 to 11VDC maximum. The LED indicator has been added to indicate when the Timer is active to a small section of electrically isolated track, allowing the train to move forward onto the rest of the layout, which is powered constantly, only to stop once it reaches this track until the timer activates several minutes later. The SPDT switch allows continuous operation in the event I need it.

The LEDs that will be used are supplied by All Electronics, part number LED-12B, 12V Blue Diffused LED, 5MM (T1 3/4). Data from their website indicates "built-in resistors for 12Vdc, 12mA operation. No external resistor required. Works well on 4-12Vdc. Dimmer at lower voltages." Not worried about the dimmer operation.

Again, I'm looking to verify the feasibility of using a 12V LED in such an application, and as to whether or not it is being applied properly. My apologies for the long explanation, but I felt some may find it useful to help determine an answer and try to give as much info as possible to eliminate confusion.

Knowing my luck, I just created a lot more confusion. I can be good at that!

The LEDS are fine. But I do not think you have the ones on the timer output circuits hooked up quite right.

If I understand your schematic, BIG IF, the two terminals at the bottom act as a switch on the 12V. 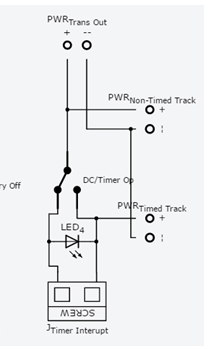 If so the LED is connected across the switch. As such the LED is actually applying a little current to the track and will glow when a loco is on the track, but the loco will not move, or may just crawl with a dimmer LED.

When the timer closes the LED will be bypassed and will go out.

Assuming you want the LED to light when the timer turns the power on, you need to arrange it this way.

BTW: I am not sure how you are speed controlling, and I am assuming you never reverse the voltage to the track.

If the track power is reversed you need to add a bridge rectifier for each LED as shown below. 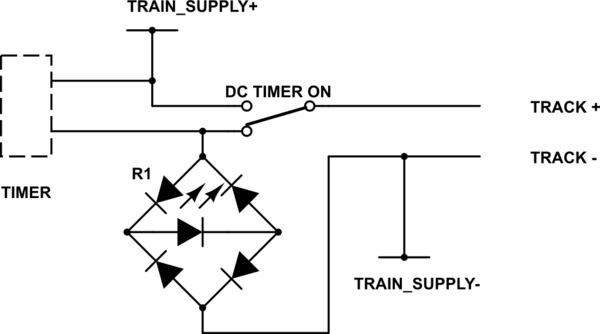 If you have reversing voltage, you can put two leds in opposite direction, each protected against reverse voltage by a schottky diode. You can use led of different colour to see which direction the current flows to. Only one led will shine at a time.

Not the answer you're looking for? Browse other questions tagged led 12v or ask your own question.

2
How can I power and dim two sets of LED lights where one requires12VAC and one 12VDC
0
Timer0 and Timer2 configuration on atmega1280
0
Triggering a LED and interrupting it quickly (with a PIR sensor). What do I need for this?
1
Is there anything wrong with my current setup for LED
5
Replacing two LEDs with a 2-pin, bicolor LED, using a circuit that reverses polarity based on two inputs
4
Dim 20ma LED in retrofit application
2
555 Timer Stops working after a few seconds
1
3 Way flip flop between LEDs with 555 timer
0
2 LEDs for a mixer, one for signal monitor and another for mute status