biasing of an NMOS

Suppose I have applied a constant current source(of value I) at the source of an NMOS ,the gate is grounded and the drain is connected to a voltage source with resistance R between them.

Equation of MOS in saturation region says that the potential of the source will be such that the current I flows through the MOS but what is happening physically that leads the source to that potential?

I think you're asking about this circuit: 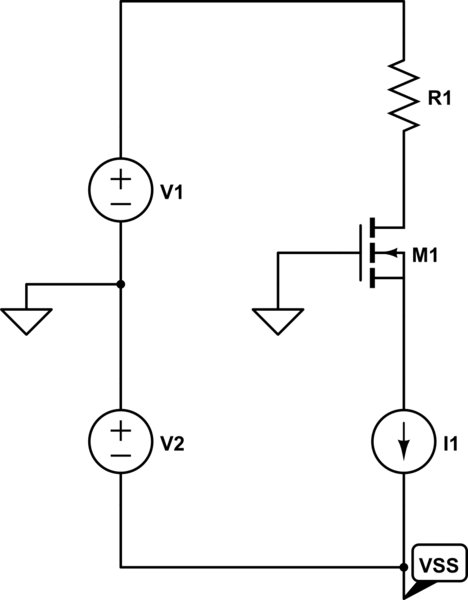 In order for this circuit to work, the current source simply needs to pull the MOSFET's source node below ground enough that \$V_d-V_s > V_{th}\$. Since it's an ideal current source, it has no problem doing this.

On the other hand, many real-world circuits that we model as current sources can't really change their output voltages arbitrarily. That's why I connected the other node of the current source to "VSS" instead of ground. If VSS is a negative voltage, then the current source could actually be implemented with another transistor (NMOS or NPN BJT).

What is happening physically that leads the source to that potential?

That depends entirely what real circuit is being used to make your current source. An "ideal current source" like we often draw in circuit theory class can't be realized perfectly, so there's no physical explanation for how it works. There are numerous ways to implement an approximation to a current source, but each one operates on its own principles.

You might want to research the cascode circuit, which is a very common real-world example of this idea.

0
Depletion Mosfet working as enhancement NMOS
0
MOSFET saturation case?
0
pseudo nmos inverter
0
Biasing using a Current Source in NMOS Common Source Amplifier
0
How does current sink help in biasing the differential amplifier?
0
Working of NMOS as a capacitor
0
What is the State of a MOSFET with a Constant Source Current and Floating Gate?
1
MOSFET R_ds(ON)