Why is there no current sharing between neutral and ground?

In the first system, will lamp1 turn on?

Arrows are the direction of currents. 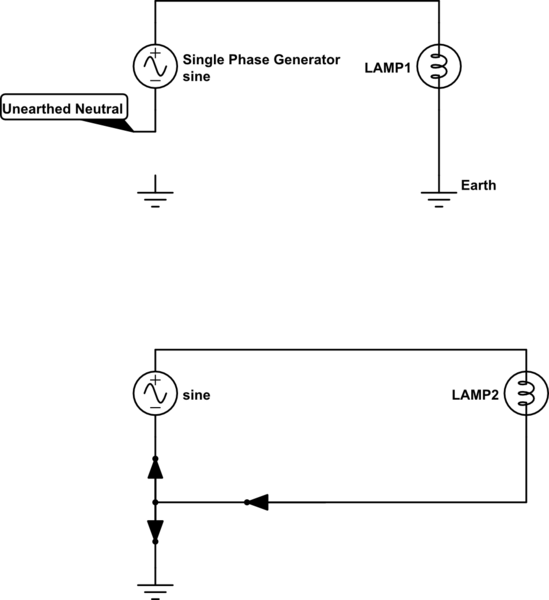 In your first diagram the answer is no. Not because earth is not a reference, but because there is no current return path to the single phase generator. 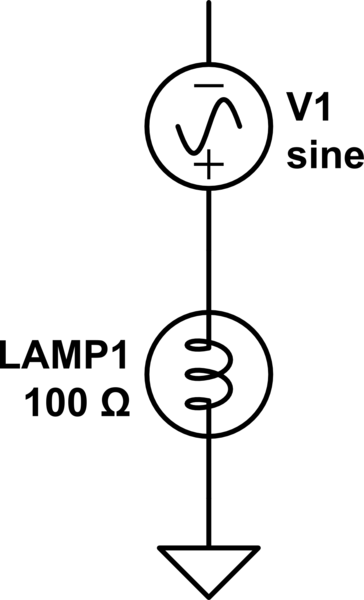 In circuit 2 there is NO current passing to ground. All the current coming from the AC source MUST return to the AC source.

Current sharing would ONLY occur if you grounded both ends on the bottom schematic. Which is what happens with bad wiring, or if there is a short somewhere. Which is why we install GFCIs in circuit breakers these days.

Typically though, houses and especially rural farms are wired this way.

The service neutral line can be omitted to reduce costs. If it DOES exist, and is rated to carry return current from all phases, the neutral should not be connected to the ground at the client end.

Interestingly your schematic #2 brings up an interesting argument: "Would the electrical system actually be safer WITHOUT all this grounding?" If it were a closed loop isolated system, in order to be shocked, you would need to touch Live AND Neutral.

Your first circuit won't work since there is no closed conduction loop path.

Your second circuit, minus the diodes or whatever those arrows are, is how power systems in single houses work. The neutral is tied to earth ground in one place, usually close to where the power comes into the house.

Earth is not "0 Volts" or anything else since voltage is a relative concept. You would have to explain 0 Volts to where? Since the earth is a large and pervasive conductor and many things are electrically tied to it, even if not deliberately, it is common to consider it the 0 Volt reference to measure other voltages relative to.

You may be confusing two different things:

There is never any current on Safety Ground except during a wiring fault. If the fault current is excessive, it will trip the circuit breaker. If not, it will hopefully flow enough to induce a GFCI trip, and not hurt any humans.

In mains wiring, conductors (hot and neutral) should be connected to Safety Ground absolutely never, with a solitary exception made out of necessity: an isolated system has nothing to keep the conductors from attaining an unexpected voltage. For instance leakage in a supply transformer could bias the entire isolated system at 2400V above ground, which would fail insulation. Or the isolated-system voltage could "rattle" due to capacitive coupling. So to prevent floating, the conductors are pegged to the earthing system, and the bonded conductor is defined as "neutral".

This neutral-ground bond is done in one single place to prevent redundant current paths (which themselves would be considered a ground fault). Before it was just good practice; now GFCI/RCD and AFCI protection devices absolutely require it.

Your first diagram is correct on the left and a code violation on the right: you didn't wire a neutral so you bootlegged neutral from ground. It will light only if somewhere off-diagram there is a neutral-ground bond. However if the source is GFCI/RCD protected, it will trip instantly.

Your second diagram shows an ungrounded system, much like you might have had in a 1946 house, except with the aforementioned neutral-ground bonding present. By modern standards you would want to extend that safety ground out to the loads, though GFCI/RCD protection will protect people if present.

In the US, an RCD is called a GFCI.

If you don't ground the neutral wire then there is no means to detect if an unsafe single fault appears and RCDs won't work.

It's impossible to completely isolate a circuit from an AC voltage source. Even with perfect insulation there is always capacitive coupling. Since it takes only a few thousandths of an amp to kill someone, it's easier to ground anything that could be electrically charged than to isolate everything. This is the basis of grounding practices in the electrical code. If a wire goes through a piece of metal, that piece of metal has to be grounded. If an alternative path to ground exists, like a water pipe, the electrical ground has to be connected to the water pipe system. The exception is when double insulation is used. This just means the appliance has a non-conductive housing in addition to the wire insulation. Grounding is never perfect and in a fault condition the grounded item could be at a higher potential than other local grounds such as a water tap. The greatest risk of this is in the kitchen and bathroom where the sockets need to be protected by ground fault circuit breakers. These measure the current difference between the hot and neutral wires. If the difference exceeds the lethal few thousands of an ampere, the power is cut.

1
Why have a ground rod?
2
Why earth ground connection does not leak current?
57
Why is main's neutral tied to earth?
0
Ground losses in mains delivery network
0
Can current flow to earth in TN-S Earthing system?
1
What is the relationship between Ground Potential Rise (GPR) and Source Voltage?
1
Question on Ground/Neutral connection for a 220V equipment
7
Why is there a voltage between the mains ground and my radiator?
1
Why does this connection not become a low impedance between Positive (Isolated system) and Ground (Earth)?
3
Why is there not lots of current flowing on a house’s grounding electrode?