I am testing time constants for a capacitor. Practical implementation is almost accurate as theoretical calculation. But the Time const changes(rises) when I introduce an LED in series with R AND C.

But when I introduce 2v2 Red-Led in series with it, the time const rises to 30sec. As far as I know, LED has internal resistance in mili-ohms so the R will not be the reason for this much change.Other factor is the LED capacitance, It will probably have some value but that value should reduce the Time constant instead of increasing it because it is in series with the 1000uF so the overall capacitance should be low, hence (RXC) should be low.

An LED is not a resistor! Simple as that.

It is a totally non-linear device. Look for I/V curves of diodes to understand what I mean:

(by H1Voltage from Wikimedia Commons)

A resistor would be a perfect straight diagonal line through the origin point with the slope being the resistance.

That means that for low voltages, the "apparent" ohmic resistance is large, and for high voltages very low. For negative voltages (which can be often involved when one is concerned with things like step responses), we typically even model diodes as perfect isolators (R going to infinity).

Especially, that means that you can't just go and say "hey, that's the time constant of my R-C-LED circuit", since unlike RC circuits, you can't just scale the input voltage and get a simply scaled output. A diode is a nonlinear device!

So, most probably that means you're trying to calculate/simulate/measure a number that's practically meaningless.

edit: here is a quick simulation that may help explain the difference between a rcled and rc circuit.

hope it helps visualize it for the OP. 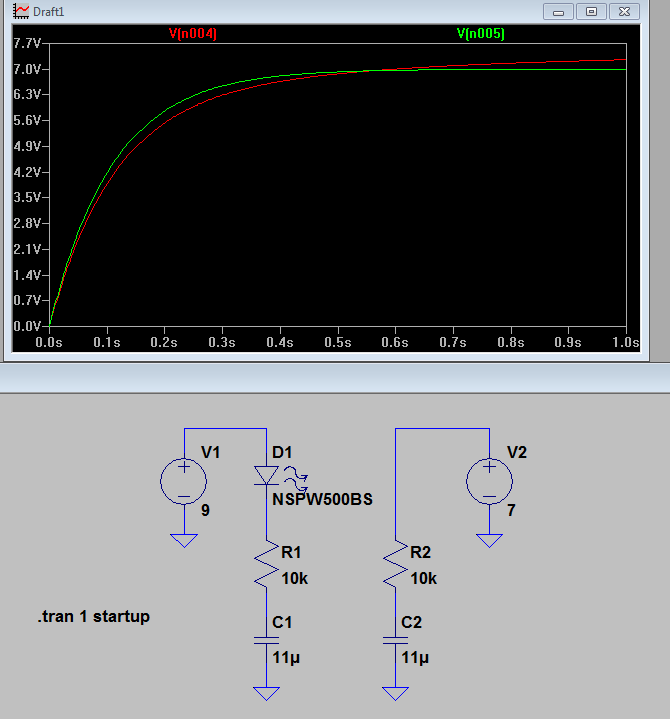 Not the answer you're looking for? Browse other questions tagged time-constant or ask your own question.