Ok, so for the past few days, i've been getting more and more interested in Peltier Modules, and i've finally decided to make a portable mini fridge with one. After MANY long hours of research, part selection, crying, and cussing, I finally came up with a circuit diagram that seemed pretty solid.

That is, until I showed it to my chemistry teacher. (He is VERY experienced with computing and circuits)

He says that if I hook up this circuit, it will most likely overload and die out, but he doesn't know why, because his teachers didn't explain it in great detail. He said that I should hook up a resistor and a fuse, but didn't tell me the specifics: how many Ohms, voltage, etc...

Keep in mind, this isn't my first time playing around with circuits. I have grasped the basics and I understand some stuff. However, this is my first time messing around with batteries in a major way. I.E: I have used batteries, like 2 AA batteries for my small breadboard projects; NEVER have I used a 12V, 20 AMPHOUR battery before! So when it comes to the big stuff, i'm a total noob.

I would appreciate it if someone can help me fix my circuit before I turn it on for real! I really would not like to throw away $160 in parts!

A picture of my diagram is below: NOTE: Some stuff has changed, like the temperature sensor now being one unit, not a probe and main unit.

If anyone can provide me a diagram or design schematic of my fridge that works without overloading or not working in general, you will receive my eternal respect and gratitude!!! 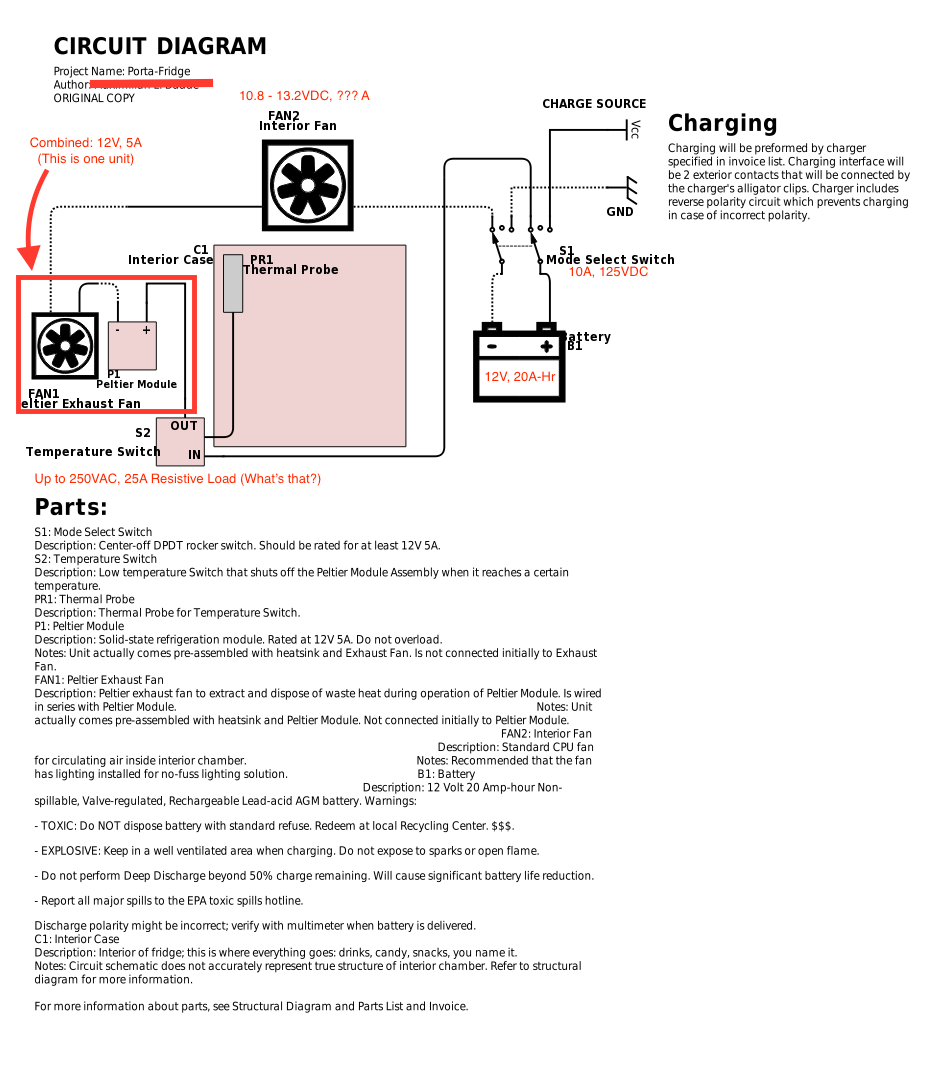 While @peufeu has given a perfectly good answer, I'll give you my own take on it.

I think you may have misunderstood your chemistry teacher's answer a bit. Your circuit as shown will basically have both fans being driven at half their rated voltage, and almost no voltage across the TEC. So you'll get the fans blowing slowly and no cooling. You won't actually damage anything, but it won't exactly be useful, either.

Assuming your temperature switch is a simple mechanical on/off switch which turns on for high temperature, your circuit should look like

You'll note that this does not incorporate some of peufeu's safeguards, but it may serve you as a starter, just to assure yourself that the idea is sound. It can also be used to get an idea if your TEC is up to the task, and if your heat sink/fans are properly functioning.

Wiring should not be that big an issue. 5 amps is not a great deal, and 20 gauge wire should do you fine. Also, the TEC is the big current hog, and the fans will run on much less (which is why they would limit the TEC current in your original design).

Over-discharging a lead-acid battery is not a good idea, but one or two incidents probably won't be an issue. It's not uncommon, for instance, for car batteries to get drawn down, and they usually are usable afterwords for quite some time. That's not to say that it's a good idea, but it's not as catastrophic as peufeu may have led you to believe. It's worth pointing out that discharging to less than 50% of capacity will typically limit battery lifetime to several hundred charge/discharge cycles, as opposed to several thousand for 10% levels.

Precision control of the voltage is not necessary. A fully-charged lead-acid battery under load will drop to about 12 volts almost instantly. For the sort of load you're proposing, you can expect the battery to be at about 11.5 volts when the battery is 50% discharged, and that is an excellent target as a cutoff point. Note that this cutoff is 10 amp-hours, and at 5 amps (more or less) this will only take 2 hours. Even if you're willing to run the battery flat, you'll only get about 4 hours of cooling.

If you experiment with your cooler, you'll see that you want to get your contents cold BEFORE you put them in the cooler. It simply will not cool things quickly. What it will do is keep them cool.

Wire your loads in parallel instead of in series.

Make sure your temperature switch can handle the current required.

ADD A FUSE ON YOUR BATTERY DAMN!!

Batteries are excellent for starting fires. A 12V lead acid battery will happily put out enough current to heat your wires red hot, melt them, and set everything on fire.

Add an overtemperature safety. When one fan fails, or someone covers the "do not cover" heat sink, or dust accumulates, etc... the Peltier will overheat and destroy itself. It is not cheap.

Now, you have 3 inputs to your switch:

It would be a bit complex to wire all this with relays, so I suggest keeping your mechanical temperature switch (if you already bought it...) and wire a dead simple safety for the rest: a low-RdsON MOSFET, a LM339 comparator, TL431 for low-battery check, and your choice of thermistor.

Test the setup using a current-limited bench power supply, not your beefy battery.

EDIT: I upvoted your question to compensate for the -1 you had because, although you clearly gonna need lots of help, you took the time to explain your problem clearly...

Not the answer you're looking for? Browse other questions tagged batteries circuit-design battery-operated circuit-protection peltier or ask your own question.

0
Connecting 5 12V LEDs in a parallel circuit
2
Bypassing a polarity protection diode with a part of a circuit. Dangerous?
0
Trouble with Peltiers TEC and USB Output Current
0
TPS26601 Industrial eFUSE Circuit Design
0
I need help to design a circuit to suppress amp peaks
0
Assistance with 18650 3S battery pack for RC
1
Would this design for Li-Ion cell protection+balancing circuit work?
0
DW01-AG circuit disabled
0
How do I design a circuit to allow for two power supplies of the same voltage?