I tried simulating a Ce into a CC multistage amplifier to get a high input resistance, a moderate gain, and a low output resistance, but however, I could not attain the frequency bandwidth.

Let's stick with the CE design. It's found everywhere in textbooks and it's not difficult to understand and apply. I'm going to discuss bootstrapping, though.

Let me begin by laying out the two schematics: 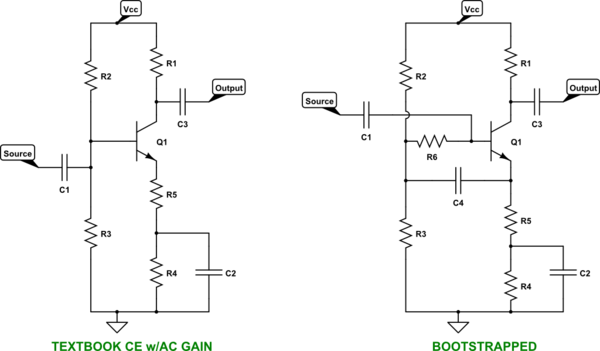 The left side is essentially the one you laid out (and should have drawn with the provided schematic editor.) The right side is a bootstrapped edition of the same thing.

A huge, glaring problem with the basic CE design on the left is that the biasing pair have to be "stiff" enough to provide a predictable bias point. Generally speaking, assuming that the BJT has a current gain of at least 100 and that "stiff" means that the biasing pair should exhibit about ten times the base recombination current, the result is that the biasing pair current is about one tenth the collector quiescent current. Sure, it's just a rule. But you can't get too far from it without more troubles. (And you have some significant constraints, by the way.)

Worse, the biasing pair usually can't set the base at the mid-point between \$V_{CC}\$ and ground. Especially when you need the output range you require. This means that \$R_3\$ in the above circuits needs to be small and it dominates the input loading (if the reflected emitter resistance doesn't get you in trouble, first.)

Right side to the rescue. Here, \$R_6\$ helps to isolate your input source from the biasing pair's load. It sets up some distance and that helps, a lot.

\$C_4\$ does the following here. Since the emitter of \$Q_1\$ has approximately the same signal as is found at the base, \$C_4\$ reflects this back to the biasing pair's shared node. Since the signal itself appears almost exactly the same, now, on both sides of \$R_6\$ then there is only a very small \$\Delta V\$ appearing across \$R_6\$ and this means that the signal-caused current through \$R_6\$ is similarly very small.

Of course, the world isn't perfect. But this method works very, very well all the same. It almost isolates the biasing pair from the input. This means all you have to worry about is the emitter impedance reflected back to the input source. Nice!

Now, you could cheat a little here. You could assume \$\beta\ge 200\$, instead. A 2N3904 BJT is almost certainly able to get you there, too. But if you want to design this for some margin... or if you had an even wider output voltage range that might squeeze the \$V_{CE}\$ of your BJT a bit... then you might be wiser to assume a lower value.

But as you can see, while bootstrapping will help you by isolating your input from your biasing pair, it will not protect you from your emitter loading. There's no escaping that problem with this topology. But in my book, you take what you can get. So bootstrapping can make things easier for you by allowing you at least some reasonable gain as well as meeting your input specification.

Here's an example design where I've assumed \$\beta=200\$ is acceptable so that the input loading specification can be approximately met while I also shoot for some higher gain value by setting \$R_5=1\:\textrm{k}\Omega\$. (With better \$\beta\$, it might be even more than met. But that's your call.)

The following does not achieve the gain you want in one stage. So it does need to be followed by another stage. 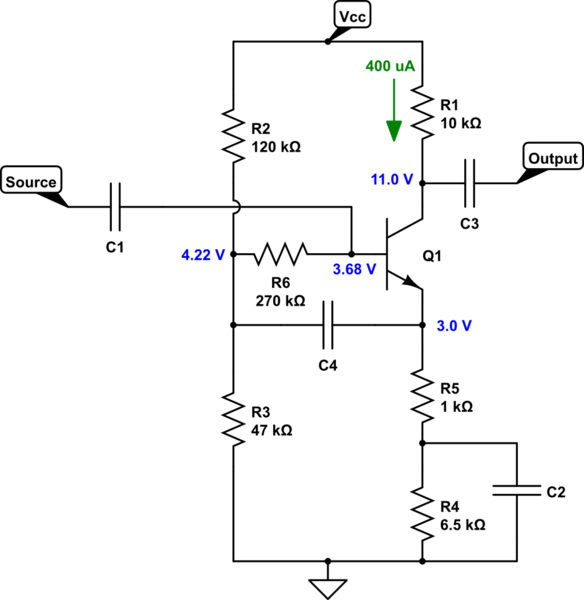 \$C_4\$ can be fairly small. It needs to pass along sufficient current for the biasing pair load it faces. But I'll let you work that out on your own. It's not all that complicated. The same for the other capacitors. That's left as work ahead (not hard work, though.)

Try it out in spice and see how you like it's behavior. It should be roughly in the right vicinity. Try various beta values and move the temperature around a bit, as well. See how it pans out. Then check on the RMS current loading for your voltage source. I think you find it pleasing.

A short note on how to think for yourself on input loading. Imagine that you make a very tiny, quick change of \$\Delta V=100\:\mu\textrm{V}\$ to the input at the base of \$Q_1\$. Look at that node and imagine the implications in terms of current. As this is bootstrapped, almost no change in current through \$R_6\$. So ignore that consideration. What else? Well, the emitter of \$Q_1\$ is pulled up almost by exactly the same amount (assuming negligible change on the collector/emitter current.) But this pulls up on one end of \$R_5\$. However, the other end of \$R_5\$ is tied to \$C_2\$. Because of how sudden this is, the voltage across \$C_2\$ doesn't have time to change yet. So the other side of \$R_5\$ can't change its voltage. So the net effect here is to change the voltage across \$R_5\$ by this same \$\Delta V=100\:\mu\textrm{V}\$. That implies an increase in the emitter current of \$\frac{\Delta V}{R_5}\$. (The AC impedance at the emitter is basically just \$R_5\$, in short.) But the base current only changes by an amount that is smaller by a factor of \$\beta+1\$. So the net effect is that the input sees just that slight base current change for that slight voltage change. Therefore, the input impedance is \$\approx \left(\beta+1\right)\cdot R_5\$. This isn't quite true, because there's also an AC impedance due to \$r_e=\frac{V_T}{I_C}\$. So it's perhaps better to approximate it as \$\approx \left(\beta+1\right)\cdot \left(R_5+r_e\right)\$.

There is a cheap-hack that will get you your gain of 50 using two of these stages. It takes almost no thought or effort to do.

Don't bother changing the output resistor (\$R_1\$) in the second stage. It's good and does better than the specification. Leave it. In fact, leave almost everything else alone. We just want to change the gain and perhaps just slightly increase the quiescent current so that we can lower the quiescent voltage at the collector of the final stage -- to get a little bit more room for the wider voltage output.

(Remember that I set it to \$11\:\textrm{V}\$ before. But with an expected upward swing of \$4\:\textrm{V}\$, that smashes us right up against the top rail. So the quiescent value needs to come down a volt, or so.)

The gain part is easy. A value of \$R_5=1.8\:\textrm{k}\Omega\$ in the second stage gets very close. So let's call that good. However, the total resistance in the emitter leg needs to stay the same, so now \$R_4=5.6\:\textrm{k}\Omega\$ is also needed, all things otherwise staying the same.

However, I said we should drop the quiescent output voltage a little bit in order to get some upper headroom. So this means dropping the second stage's \$R_4=4.7\:\textrm{k}\Omega\$ might be a little better choice here. We need the extra margin.

Oh. Well. You might also change the 2nd stage's \$R_6=220\:\textrm{k}\Omega\$. I've brought the quiescent current up a little (10% or so) and this means that the quiescent base current is about the same amount more, dropping a little more voltage than planned. So reducing its value a little makes sense to bring the drop back into plan. I get a little more margin against \$V_{CC}\$ this way (worth it, I think), but I probably have enough without the change, too. I'd probably drop \$R_6\$ down. But it's probably not required, either. Up to you.

You should see a very close voltage gain value to your desired 50. In practice, perhaps just slightly less or perhaps just slightly more. You can't rely upon an exact 50: (1) discrete life doesn't work like that; and, (2) I just used standard values for the resistors; and, (3) there's still no accounting yet for the unknown (as yet) input source impedance or the unknown (as yet) output load. But as some say in English, "it should be good enough for a game of horseshoes."

Cascode (google it) a common base stage above the collector of the input stage, then feed back from the output stage emitter to a suitable point on the bias network?

Feedback is your friend (As is bootstrapping the bias network).

Also note that PNP transistors are available as well as NPN, this may or may not prove useful.

There is good stuff in the library, I refer you to both TAOE and "Small signal audio design" by Self, which IIRC has some high input impedance bipolar trickery in it.

You may like to investigate the "long tailed pair" as an input stage, it has interesting possibilities.

it is fairly easy to design.

I would pick R2 to be just slightly bigger than the required input resistance. so R2 = 220K.

A quick sim suggests a gain of 70x. A slightly higher Re1 will dial that back.

Not the answer you're looking for? Browse other questions tagged transistors amplifier analog bjt or ask your own question.