Why transistor doesn't oscillate in this configuration?

Current will flow between base and emitter. This will switch the transistor on and current flows from collector to emitter.

Why would all of the current flow through Vce? Even if the transistor is entirely on (dead short), you still have LED voltage drop so you'd have LED voltage drop across 100k so you'd still have at least some base current. You are right to an extent that these two things will balance eachother out to some degree and find an equilibrium. Nothing here appears to cause any sort of oscillation though.

Even if you removed the LED, instead of oscillating, the transistor would find some equilibrium point where the voltage Vc would be enough to support the transistor base being on to some degree.

Maybe you're having trouble with this idea because you believe transistors are like on-off switches? They're not. They're gradual turn-on/turn-off devices.

As others have answered, the transistor does not 'rush' to the on-state, conduct too much LED current, drag its supply rail down and so rush back. It travels towards a balance point, and stays there.

Risking yet another parallel, it's the same reason why pulling a spring apart in your hands sharply doesn't result in endless oscillations when you then hold your hands still and get them pulled together a bit. The spring stretches to a balance between how hard it can pull your hands together against how strongly you are holding them apart.

Back to transistors, below is a circuit that acts as what someone once called to me a 'programmable diode'. This shows an application of this 'just-on balance' idea. 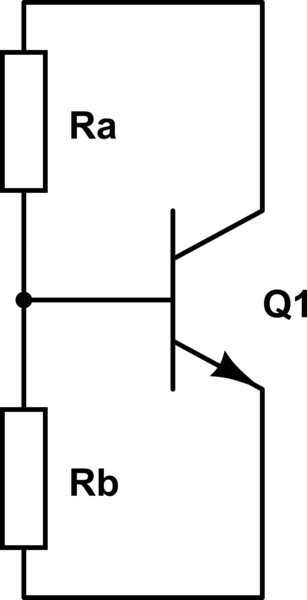 Its normal application is with a voltage across Vce supplied through a resistor somewhere up above. I'll avoid that to keep on this circuit.

Transistor Q1 turns on but the more current it conducts, the more it drags down the supply across the potential divider and so across its own base. If base voltage Vbe goes below (say) 0.7 V, Q1 isn't on at all which means the rail isn't pulled down. So Q1 finds a balance: just enough to hold its base just on enough.

This produces the function of a configurable voltage drop, with Vce kept at something like Vbemin(Ra+Rb)/Rb volts, where Vbemin is 0.6..0.7 V and particular to that transistor.

But this should create low potential at base probably?

No. This is your basic misconception. The base voltage doesn't really change as the transistor conducts collector to emitter.

Also, if the transistor really worked the way you think, it still wouldn't oscillator. To get oscillation, there needs to be a loop gain above 1 at some frequency, but not at DC. What you describe is negative feedback, which would cause the transistor to find the operating conditions where the competing effects balance out.

As a aside, that is not a good way to connect a LED. If the transistor were to turn on fully, there would be nearly 5 V across the LED. Something would have to give, like the battery dropping voltage, the transistor blowing up, or the LED blowing up. If your LED lights without getting damaged, then it is only because of the limited gain of the transistor keeping the collector current low enough.

Not the answer you're looking for? Browse other questions tagged transistors oscillation or ask your own question.

6
Problems Getting NPN Bipolar Transistor to Switch On
11
Why can current flow through the reverse biased base-collector junction (N-P junction) in a BJT with a forward biased base-emitter junction?
0
Designing transistor logic gates
0
Transistor feedback loop
7
Why does this circuit oscillate despite a short?
2
Is it possible to make current flow through a transistor from the emitter to the collector without supplying voltage to the base?
0
Help with explanation on this transistor behaviour
10
Building NOT gate with transistor -- output remains always high
0
Question about NPN BJT transistor